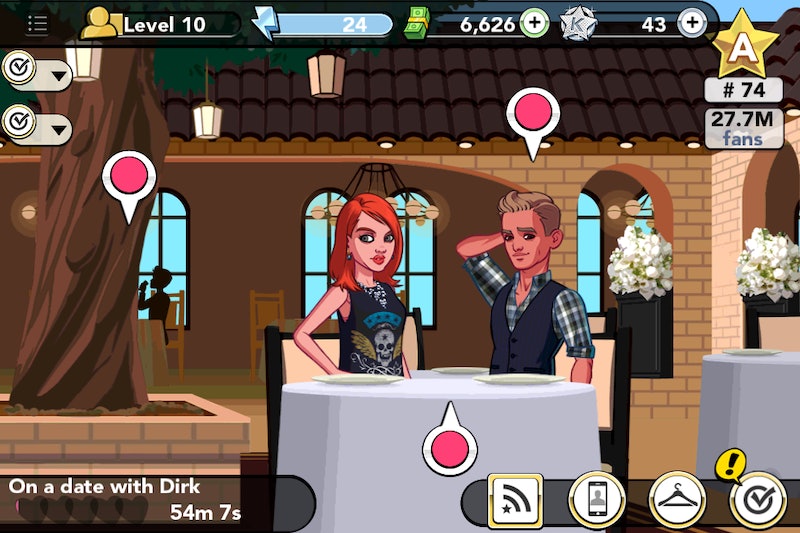 I have enough confidence in myself to admit it in the open expanse of the Internet (where, I realize, everyone from my 8th grade science partner to prospective employers that may one day deem me suitable enough to give money to can read it): I have played Kim Kardashian's iPhone game, Kim K: Hollywood. I am actually an A-lister on that game, currently sitting on the #74 spot between two other unrealistically model-like "famous people" who for some reason have fans despite not once being seen or mentioned in the game. After all, I'm a writer who focuses on all things pop culture! It's my job, no, my duty, in a sense, to keep up with the trends. (But then, yeah, I got sucked into the game and maybe stayed up way too late a few nights playing it. This is a no judgment zone, guys!) Anyway, during my adventures in Kardashianland, I often ran into an issue I'm sure others struggle with as well: How do you date in Kim K: Hollywood without going broke?

So often, the game suggests dating around as a quick way to level up, but even the tips concede that dating is expensive — so, how does one actually take advantage of the benefits without getting any of those pesky in-app purchases and giving Kim Kardashian more money than she already has? After some research (a.k.a., playing the game and saying it's for work), I came up with a few tips that may help. And you can trust me, guys, I'm an A-lister.

If you need money fast, work a shift at Dash

OK, so it's not the most glamorous ways to rack up the $$$, but hey, you can't knock the hustle — if you need to work a shift at your BFF Kimmy K's store so you can bag some model dude at Panino, then have no shame about it. You do you.

Look, even Kim has taken some jobs she maybe felt were below her just so she could keep making enough money to live her lifestyle. Kim may be getting Vogue covers now and making a ridiculous amount of money off of iPhone apps, but, as Khloé pointed out in a recent episode of Keeping Up With the Kardashians — "remember when Kim did K9 Magazine ?" With a consistent cash flow, you'll have enough disposable income to date and level up, as well as buy more of those ridiculously overpriced clothes from the Kustomize section.

You can spend money to make money

I know it's a lame suggestion, but I've gotta put it on here: Using real cash will buy you more cash in the game, if you need it. But why waste your money on that when you've got other options?

It's not much, but a couple of dollars can buy, like, 1/5th of a drink in Kardashianland.

Sure, dating is a quick way to level up, but you can also take your time and rise to the ranks of an A-lister more powerful than Kim Kardashian herself without dating around. Do more photoshoots and work more, make more contacts and connections — the methods are endless. Be an empowered cartoon character and just break up with everyone! They're all assholes anyway.

Seriously, you're a D-lister who looks like Ryan Seacrest if he spent too long in a tanning bed on Sunset Tan. Get out my face.