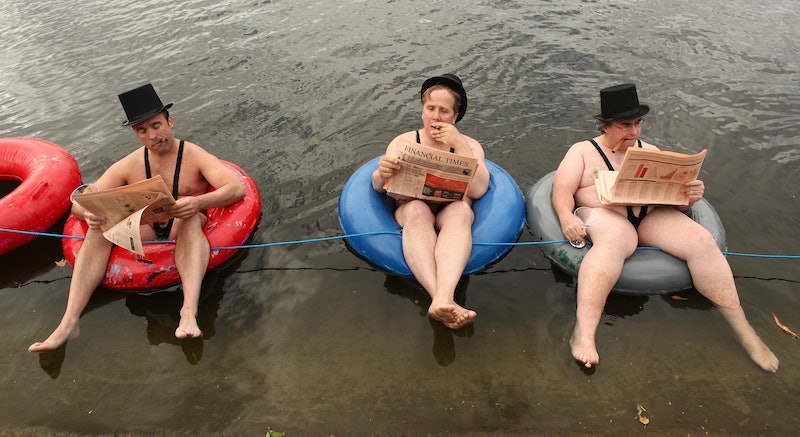 First, let's get the obvious out of the way: Clearly, there's nothing actually obscene (or titillating, or sexually indecent) about breastfeeding. In fact, not only is it as wholesome as apple pie — it's your right as an American to do it pretty much any damn place you please, by law. Forty-seven states allow nursing mothers to breastfeed in any location, public or private, while most others provide other protections, exempting breastfeeding moms from public indecency laws. The only outliers are South Dakota and Virginia — which exempt breastfeeding moms from public indecency or nudity laws (but presumably don't lawfully guarantee their right to breastfeed) — and Idaho, which is the only place in America where breastfeeding mothers are not protected by law at all.

These haters urge mothers to use a cover when feeding, ask them to hide away in a germ-infested public restroom, or straight-up make them leave because they think breastfeeding is racy. As exemplified by an NBC report on breastfeeding called "Food or Lewd?" from a few years back, plenty of people still think the issue of whether or not breastfeeding is appropriate public behavior is still up for debate, because it is just so damned sexy, how are we supposed to tolerate it? How are we supposed to go about our lives when we know that, somewhere out there, a mother is breastfeeding a hungry baby in a Target?

Despite periodic regional attempts to ban thong bikinis in public, there's no national ban or serious regulation in place, and many lifeguards refuse to enforce bans even in areas where they're active — meaning that you're free to minimize your tan lines on the majority of American beaches, lakes, and national parks ... but you might be scolded for feeding your baby in Idaho.

your right to MAKE OUT ON THE STREET

Despite some never-used archaic make-out laws that are still on the books (i.e. you can't make out for more than five minutes in Iowa), making out only actually becomes a crime when you start to creep into indecent exposure territory. In fact, Kentucky Kingdom, which made waves this past year by hassling a breastfeeding mom, has no notes in their FAQ about whether public displays of affection are permitted there, so feel free to go to town while waiting on line for the Thunder Run or whatever. Just remember: Don't feed your baby.

This extremely catchy song — which was definitely not about accidentally losing track of your friend Amy after she went off to buy a kebab at the street fair — was a top 20 hit in 2009, and even though there was a "clean edit" released for Clear Channel usage, the original version could still be heard all over the radio. Clearly more appropriate than a mother feeding her child.

your right to BE A SPRING BREAKER

your right to WEAR EXPLICIT T-SHIRTS

Most T-shirts that have been censored in the U.S. have been challenged because they expressed political opinions or used foul language (or a combo of both). While that's all well and good, that also means grody dudes the world over remain free to wear their "Big Johnson" T-shirts anywhere they like in peace.

A day without a news story about a nearly nude starlet posting photos of herself on Instagram is like a day without sunshine, right? Though Rihanna and Scout Willis both ran afoul of Instagram's community guidelines by posting bare nipples, most celebs have no problem posting revealing shots that run the gamut from sexy to raunchy on the daily. This makes it all the more shocking, then, that so many nursing mothers find themselves with photos deleted and accounts suspended after posting breastfeeding pics — even though breastfeeding shots are now techincally permitted on both Instagram and on Facebook.

Here's why: Since these social networks rely on user-policing to sniff out objectionable content, mothers who are not violating any of the social networks' community guidelines (i.e. not baring their nips) can still have their accounts suspended if enough people with anti-breastfeeding agendas flag their account. Not that the community guidelines make all that much sense, anyway, as pointed out by the #FreetheNipple campaign. What's going to happen if people see a breastfeeding mother's nipple? Will they become cursed, and die in seven days unless THEY post a photo of their nipple on Instagram? Very confusing, indeed.

your right to CATCALL STRANGERS

In most states, catcalling must involve explicit obscene language, or an actual threat, to violate the law — meaning everything from "Smile, sweetheart" to "Shake it, party pants!" falls within the letter of the law.

your right to ADVERTISE a STRIP CLUB ON THE HIGHWAY

Puzzling headline aside, billboards like this are perfectly legal, despite the occasional community-led campaigns against them.

your right to put NAKED LADY MUDFLAPS ON YOUR TRUCK

Folks have attempted to ban these boobalicious pieces of Americana and failed more than once, leaving you free to celebrate the joy of the open road with some tasteful nudity.

your right to SHOW OFF A SEXUALLY-EXPLICIT TATTOO

Though one Texas woman was infamously booted from Legoland two years ago over a tattoo she had of Tinkerbell, uh, pleasuring herself, tattoos are generally considered a legally protected form of expression, no matter what they depict. Meaning, presumably in Idaho, you could get a tat of boobs ... and that would still be more protected than your right to breastfeed.