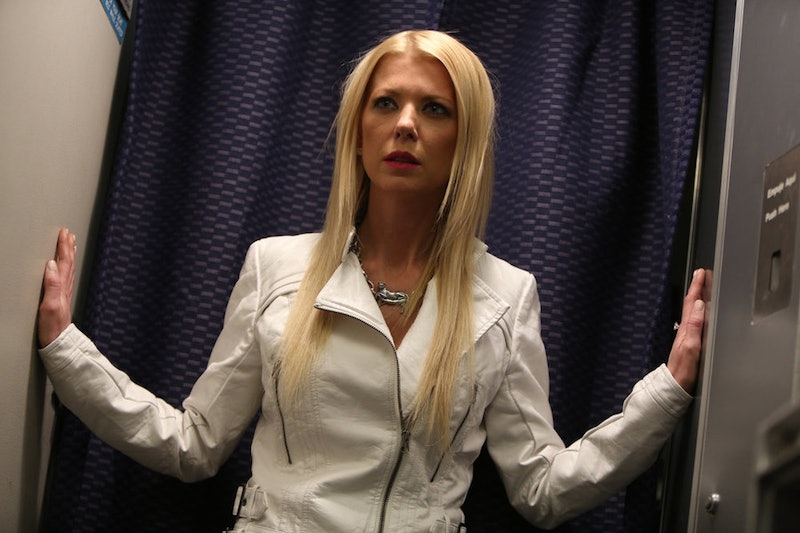 It's not often that you see Tara Reid named as the most important part of a movie (unless we're talking about Josie and the Pussycats, duh), but the Tara Reid we meet in Sharknado 2: The Second One has changed everything. Reid is absolutely the best thing in SyFy's followup to the surprise hit and it has everything to do with a prosthetic "hand" she fashions in the final seconds of the movie. In a word, it was badass.

Of course, Reid's April returns to us from Sharknado and since then she's written an apparently wildly popular book: How to Survive a Sharknado. We don't get any of the wisdoms from this tome (which are surely just as good as her beau Fin's assertion that New Yorkers are justified in their panic because "There are sharks. They're scary. And you don't want to get eaten"), but we do get to see her apply that advice IRL (or in real SyFy life).

Right at the outset of the film, April is on a plane with Fin when the initial Sharknado hits. While Fin jumps to save the day and fly the plane, April takes it upon herself to dangle out of the midair craft with a handgun and attempt to assassinate the finned attackers. Solid plan, A.

This plan doesn't work out super well, because a giant shark — who April claims had a vendetta against her (you know, that thing sharks can totally do) — "swims" towards her... in an out of control tornado that is not made of any sort of liquid and eats her hand. She lands at the hospital (with celeb cameo doctor Billy Ray Cyrus) and manages to escape in a brand new outfit, despite the fact that she's newly missing a hand and has lost tons of blood and probably isn't thinking straight.

This all leads her to the penultimate scene, where she swoops in to help Fin save the day once more. But she doesn't just show up in a fire truck (OK, sure). She also looks at a table of random mechanical pieces that is on-hand for some reason in this emergency situation, and within five minutes of offscreen time, builds herself a robot hand whose main asset is a spinning saw blade. How did she do that? No one knows. Why did it only take five minutes? Who cares? Wouldn't it get super infected after she gets covered in shark blood after killing a shark that flies at her out of one of two (yeah, two) sharknados? Probably, but that just makes it more badass, right?

And while April doesn't use a chainsaw to electrocute the Sharknado, or sacrifice herself to the shark gods (RIP, Vivica A. Fox), or ride the shark that ate her hand down onto the Empire State Building spire, girl made herself a fucking saw hand in under 10 minutes and saved the guy who saves the day. So if you think about it, for once, Tara Reid was the best damn part of the flick.