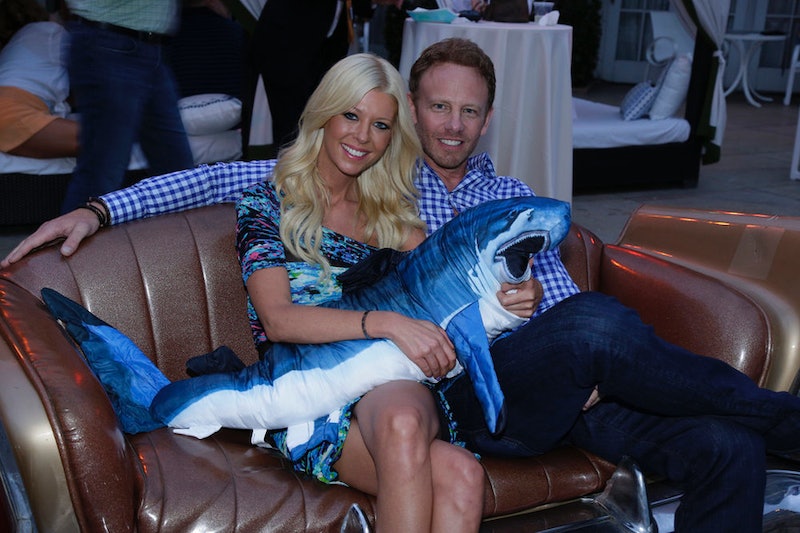 Tara Reid was in her element in the late 1990s and early 2000s by starring in movies that teenagers loved. She hasn’t been in many legitimate motion pictures in recent years, but legitimate or not, she made a comeback last year in Syfy’s Sharknado, and we get to see Tara Reid again in Sharknado 2: The Second One . For those of you somehow unfamiliar with one of the most ridiculous disaster TV movies ever made, Sharknado centered around a hurricane that caused the streets of Los Angeles to flood and fill with sharks, that lead to water spouts filled with sharks, that lead to shark-invested water tornadoes. Thus, the sharknado was born.

In Sharknado 2, the setting will be New York City and Reid will reprise the role of April — the ex-wife of the protagonist Fin (Ian Ziering). Reid has gotten a lot of hate over the years (even from her costars), so let's ride the awesome wave that is Sharknado 2 and give her some positive vibes. Here are some Tara Reid roles we love:

Before Ryan Reynolds was the Ryan Reynolds, he was Van Wilder in National Lampoon's Van Wilder, and Reid was Gwen, the college newspaper journalist who made him want to change his party-planning ways and graduate college. In a dangerous movie theme in comedies, Gwen was unwittingly dating a heinous, selfish jerk (see Wedding Crashers and The Wedding Singer). Don’t you just wish that when a female character is supposed to be smart, she’d be intelligent enough not to date an asshole? But this way there is no guilt when she leaves him for the male lead. Regardless, I didn't completely believe her as the hyper-intelligent Gwen, but she did give some convincing sass.

Well, obviously Sharknado had to be on this list — even though I kept getting hung up on the fact that Reid didn't seem old enough to have teenaged children. Then, I had to remind myself that I was watching Sharknado and should probably not get too invested in the plot details (but for the record, Ziering is 50 and Reid is 38, so Reid's April would have had to be less than 20 when she first had children if she has a son in flight school). ANYWAY, good thing April's pesky new boyfriend was disposed of quickly in the first Sharknado to make way for her and Fin to get back together for Sharknado 2.

And we'll give her a pass that she kind of thinks a sharknado could really happen since science tells us it's actually not so impossible.

Full disclosure: I haven't actually seen this movie, but I — uh, can I admit this? — I like kind of want to see it ... just a baby bit. It's a mashup spoof of The Hunger Games and The Hangover and Reid stars as Effing White (OMG so clever). Costarring Jamie Kennedy, the flick sounds like it has a Date Movie vibe. Actually, The Hungover Games has a higher viewer rating on IMDb than Date Movie — but to be fair, Date Movie has over 15 times the reviews that The Hungover Games has. And to be even more fair, neither movie's ranking is over a four out of 10, so we aren't talking about quality movies here.

But in recent years, we aren't talking about quality movies when we discuss Reid. That's not really what we expect or get from her nowadays (or maybe ever if you ignore The Big Lebowski). We get outrageous B movies (or even Z movies) from her, but it seems like she's embracing it. So let's not be too hard on her for now and just bask in the campy glory that is Tara Reid in Sharknado 2: The Second One.