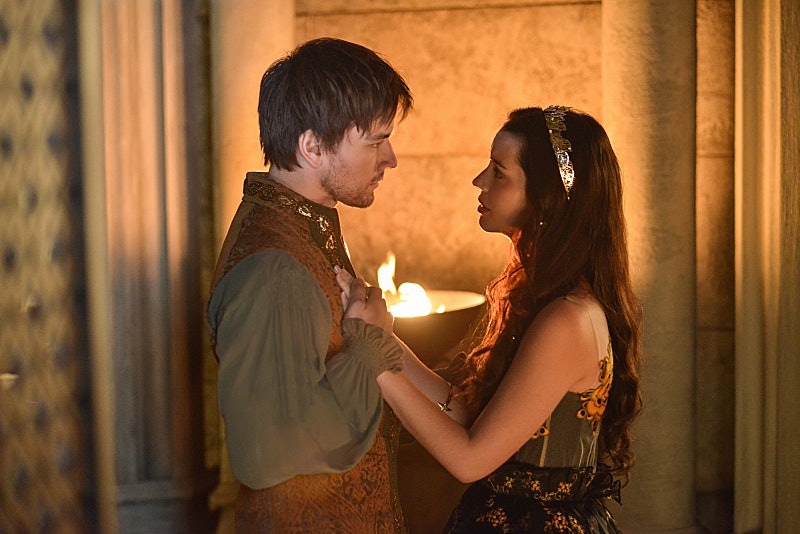 Will they or won’t they? It's the ultimate question to any potential love story. The anticipation of the first kiss… the longing glances in each other’s direction… it’s enough to leave any viewer on the edge of their seat (and in need of a very cold shower). With love triangles, it’s even more complicated since it brings more than one ‘shipping possibility into the equation. You can just sit back, relax, and let your fangirling freak fly. Sounds like a pretty awesome setup, right? So why is it that Reign seems to be doing everything in its power to shy away from the Mary-Bash-Francis love triangle?

Seriously, writers — what gives? I’m not saying that I don’t enjoy Mary and Francis: The Happily Married Years because I totally do. But that doesn’t mean I want the entire idea of an eventual Mary-Bash hookup completely out of the realm of possibility. Basically, I don't want this relationship off the table just yet, which is what made the love triangle option so very appealing. But alas, it seems as though this particular romantic tryst has no place in Reign Season 2… or at least that’s what the series wants us to believe.

Adelaide Kane, who plays Mary, recently addressed the love triangle situation at Reign ’s 2014 Comic-Con panel and insisted that it won’t be returning anytime soon… or ever, for that matter. “They’ll always have a special relationship,” she said, in reference to Mary and Bash’s future. “I just don’t think they’ll bang.” Talk about seriously reigning on somebody’s parade.

Of course, there’s always the chance that the writers won’t share in Kane’s opinion, though executive producer Laurie McCarthy has outright admitted to being an avid Frary ‘shipper. But this could simply be part of one big fake out — a way to trick us into thinking a reunion is never going to happen, only to surprise us with it further on down the road. But I'm onto their mind games. Let’s not forget that Reign’s Season 1 finale left things rather strained between Mary and Francis now that he's a full-fledged baby daddy to Lola’s child. It’s bound to influence their relationship next season and leave Mary feeling in need of a bit of comfort. Enter Bash:

He’s always been there for Mary when she’s needed him most, so a bit of marital tension could offer the perfect excuse to write in a few good Mary-Bash moments. And even though Kane said they probably won't "bang," she didn't exclude the possibility of a few stolen kisses here or there. Naturally, they’d both feel pretty guilty about it later on, but it would give fans a small jolt of hope, knowing it could lead to more in the future, especially since Nostradamus (and real-life history) keep reminding us of Francis' eventual demise (not that we want that happen anytime soon, mind you).

But to have Bash and Mary's relationship completely transition strictly into the friends zone from here on out would just seem odd and extremely cruel. Feelings like that don't simply disappear overnight. And does this look like a regular friendship to you?

I think not. My guess is they'll still manage to incorporate a few intimate moments here and there to appease fans. After all, watching two brothers fight over the same girl has proven to be a pretty popular CW concept in the past...

So, between you and me, let's not give up on the underdog just yet.