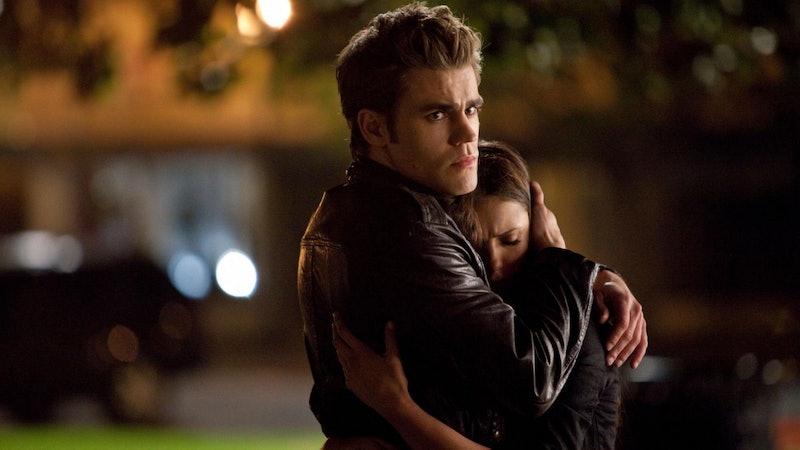 Who's bringing the snacks? The CW's vampire dramas are going to collide again sometime soon and I've never been more excited for something since Klaroline's 100th episode reunion. According to CW network president Mark Pedowitz, a Vampire Diaries and Originals crossover will happen but, in the case that it's not for Klaroline to get back together (it'd better be), there's another way that could kill two birds with one stone. Elena, Stefan, and the Mystic Falls crew will take a road trip to the Big Easy because, well, they need help and apparently New Orleans is a hotbed of supernatural chaos.

Is it October yet? At the TCA Summer Press Tour, Pedowitz revealed that "when it is organic, we'll do a couple of crossovers." A couple? So that definitely means that fans could get a massive reunion AND Klaroline in either one, big crossover or "a couple" of small ones. It's as if Pedowitz has been reading Twitter to find out exactly what fans want to hear now that Julie Plec broke all of our hearts by killing Damon Salvatore in the TVD Season 5 finale. So, how the heck is this going to work?

In case you need a little refresher, when we left off with TVD and The Originals both series were in major turmoil. On TVD, the Travellers had screwed everything up and made Mystic Falls a no-fly zone for supernatural beings. Their unnecessary drama ended with Damon and Bonnie (TVD's resident witch) getting zapped into oblivion and we're all pretty sad about it. So, yeah, Elena, Stefan, and the rest of that crew could really use a little intervention or, at the very least, a change of scenery. On The Originals, Klaus, of all people, got hoodwinked by pretend-human Francesca when she and here entire werewolf family swiped his enchanted moonstones and massacred an absurd number of vampires at the Mikaelson compound. Not really the ideal situation to be incapacitated during every full moon when you just had the world's first hybrid baby. Both series is dealing with complete and utter chaos and either way, both sets of characters could use a little extra help.

So, here are two theories as to how and why a TVD and Originals crossover could happen as early as TVD Season 5 and Originals Season 2:

We. Need. Witches. When TVD Season 5 killed off Bonnie for most of the first half of the season and then, allegedly, for good in the season finale, we all realized how screwed everyone was. No one on TVD has ever been able to really trust a witch that wasn't Bonnie over the past five seasons — mostly because every witch they've come across has had a strictly anti-vampire agenda. So, even though she was incredibly judgmental, preachy, and annoying most of the time, Bonnie was a total asset to this group.

When Season 5 ended, everyone who made it back from The Other Side before the collapse that sadly took Damon (RIP) was left with a huge shitstorm back in Mystic Falls. Which isn't limited to the fact that they can't technically get into the town anymore. (Thanks, Travellers, so glad we invited you to the party.) So, if Elena and the rest of TVD's series regulars have any hope of getting back to their home, they're going to need witches to break the Traveller's barrier around Mystic Falls. And there just so happens to be an extremely powerful witch hanging out in New Orleans — Davina.

Sure, she probably won't want to help them, but they won't find that out until they get there. And, well, she might be the only person who dislikes Klaus more than Elena and we all know how having a common enemy is a great bargaining chip on this show. There's also the question of how to get Damon and Bonnie back to this world, which is something that the witches of New Orleans (particularly Davina) have shown great talent with in the past. Mikael found her during Season 1 of The Originals and with her talent, I have no doubt that she could locate them, wherever they might be.

Again, much like how the Other Side's collapse effected everyone in Mystic Falls, the shit really hit the fan for Klaus in New Orleans. For the ultimate supernatural being, he's managed to find himself in the worst situation yet — he can essentially be controlled by Francesca and both of his parents are back from beyond the grave (he doesn't exactly know about that yet, but he will). AND, as if that weren't enough to drive Klaus off the rails, he has the added bonus of discovering his emotional center when Hayley gave birth to his hybrid baby daughter, Hope in the Season 1 finale. So, you could say that things are just not going well. At all.

Klaus needs bodies and he needs help with this werewolf problem and who better for the job than one of his former comrades, Stefan Salvatore? Well, and basically everyone in Mystic Falls because from what we've seen, they know how to kick some serious ass when necessary. Also, everyone's pretty much over that whole Tyler thing anyway, now that that perpetual liability is human again, so it'd be cool for them to help out their frenemy. I can imagine Elena and Stefan are feeling the need to let go of a little rage at this point, considering the injustice of Damon's death and all. So, really, everyone wins here.