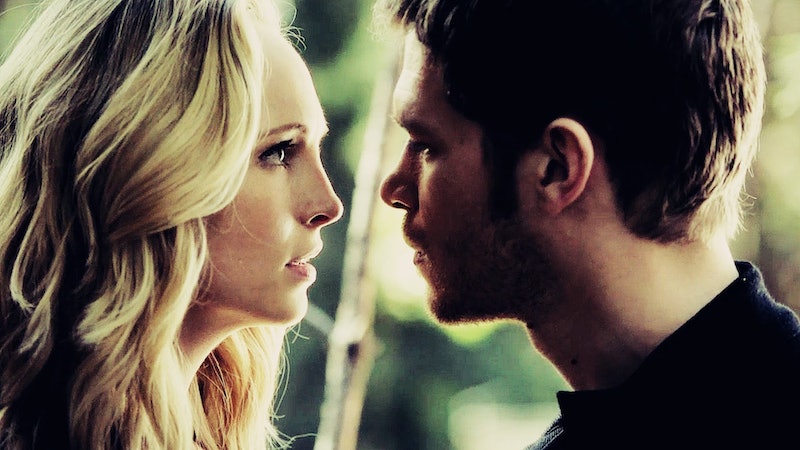 Could it be that the moment we've all been waiting for is finally on its way? There's going to be a Vampire Diaries and Originals crossover, so that obviously means that fans will finally get Klaroline. According to E News, The CW's network president, Mark Pedowitz revealed a huge, exciting potential plot point for the upcoming season of The CW's vampire dramas, The Vampire Diaries and The Originals. And this is what we've all been waiting for since TVD 's 100th episode in Season 5: a Klaus and Caroline crossover that finally gives their relationship the attention it deserves.

At the 2014 Summer TCA Press Tour, Pedowitz dropped details about a handful of The CW's series, but it's his TVD and Originals reveal that's got me ready for October to get here already. The network president told reporters at the event that, "when it is organic, we'll do a couple of crossovers," when discussing the two vampire dramas. And, well, what could be more organic than the fact that Caroline, Elena, Stefan, and the rest of Mystic Falls' vampires can't get into their town now that the Traveller Curse is on it? They're going to need help and they're going to need witches, but on the other hand, Klaus and Elijah could use a little extra help in New Orleans as well.

Essentially, there are plenty of rational and "organic" ways that a Klaroline reunion can work, which is great news if you've been 'shipping this pair for awhile. And, aside from the fact that it could obviously be amazing and fan-pleasing and make perfect sense, this crossover reunion needs to happen. Klaroline made people so happy last time.

I know what you're thinking: "What about Steroline?" Well, that's precisely the reason this needs to happen. First of all, Stefan is in no place to start a healthy relationship, even if it is with Caroline and they already have a great friendship to base it on. And, even if they did get together, Caroline's feelings for Klaus haven't just magically disappeared. They couldn't be together because of Tyler and because they needed to remain in Mystic Falls and New Orleans, respectively, to deal with their ever-complicated lives.

So, in the case that Steroline did happen during TVD Season 6 and then Caroline and the rest of the Mystic Falls crew went down to NOLA for an Originals crossover, she'd immediately realize that she was making a mistake with Stefan and break things off. And, really, does anyone want to see Stefan get kicked like that while he's down?

On the other side of things, Klaus needs this reunion, too. When we left The Originals at the end of Season 1, all of the shit had hit the fan in New Orleans. Klaus had been deceived by Francesca; Hayley gave birth, died, and became a hybrid; and he had to send his daughter off to live with Rebekah. Oh, and Mikael, Esther, and Finn have all returned from the grave. And while Klaus and Hayley seemed like they might have an emotional thing going on, it's never going to work out for him. They're going to be a modern family, in which Hayley is in love with Elijah, but she and Klaus co-parent Hope in the most functional of ways. (I know, that sounds idealistic, but the only way these characters can go is up.)

At this point, Klaus could use someone around for emotional support (that sounds like it goes against his nature, but he's seen the light in that baby) and no one is better for that job than Caroline. We've seen him let his guard down around her, we've seen him lean on her — there's really no better character to step in and stand beside Klaus in this battle. The Originals Season 2 is supposed to feature a major shift in Klaus' character on an emotional level now that he's had to go through giving up his child. Which, while it creates a lot of room for deep, dark depression, it also creates a space for Klaus to work through his feelings with the help of someone else — someone he loves and intends to spend the rest of his existence with, Caroline.

Pedowitz straight-up letting us know that a crossover is in the cards and following it up with the fact that Caroline and the rest of TVD's vampires are going to have trouble getting into Mystic Falls opens up a huge window of opportunity. And it's an opportunity that would be wasted if the two series don't take it and use it to elaborate on Caroline and Klaus' relationship. Because as much as Caroline and Klaus clearly love each other, the fans love them even more. If you're going to take Damon away from us, at least give us something to root for, Julie Plec.