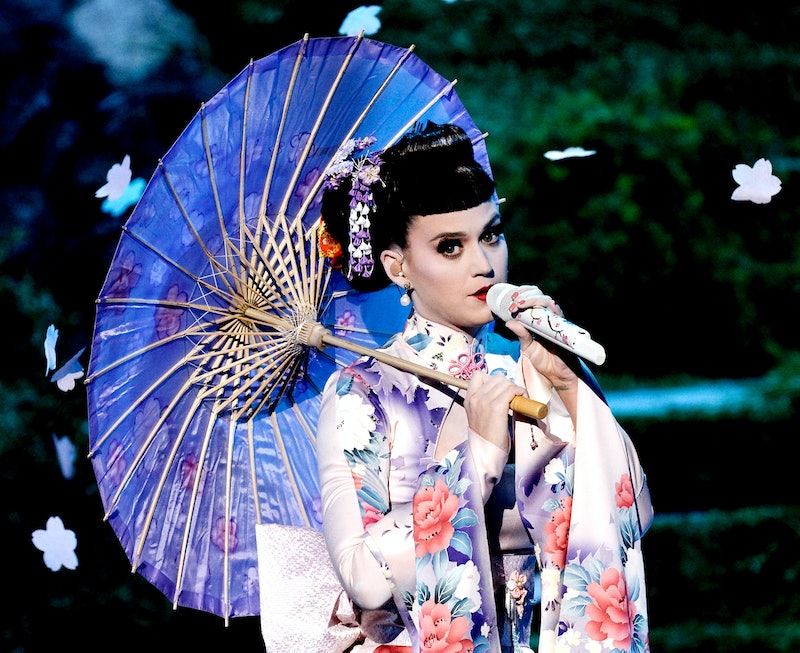 Remember Katy Perry's geisha appearance at the American Music Awards? And her mummy dancers on tour with giant fake butts? Well, Katy Perry responded to all the following accusations of cultural appropriation in an interview with Rolling Stone:

As far as the mummy thing, I based it on plastic surgery. Look at someone like Kim Kardashian or Ice-T's wife, Coco. Those girls aren't African-American. But it's actually a representation of our culture wanting to be plastic, and that's why there's bandages and it's mummies. I thought that would really correlate well together… It came from an honest place. If there was any inkling of anything bad, then it wouldn't be there, because I'm very sensitive to people.

I guess I'll just stick to baseball and hot dogs, and that's it. I know that's a quote that's gonna come to fuck me in the ass, but can't you appreciate a culture? I guess, like, everybody has to stay in their lane? I don't know.

Well, Perry is right about one thing: she doesn't know. I can buy that Perry meant the mummies to be a comment on plastic surgery and just doesn't know how to edit her ideas, but the pop star completely misses the point on cultural appropriation. In her comment, she manages to both misunderstand what "appreciate" and "culture" even mean.

First of all, dressing up in geisha wear for a music awards performance broadcast on national television is not "appreciating" anything. It's profiting from it. If you want to "appreciate" that culture, read Memoirs of a Geisha, travel to Japan, take a night class at a local college. Second of all, what Perry was portraying was not any sort of culture, it was a caricature of a tradition of another culture and a stereotype that continues to plague many Asian women today. Although Perry may think that this "exotic" representation of Asian women represents "unconditional love," it's an oversimplified image that presents them as beautiful, quiet, passive, and servile to men. The love that to her seems "unconditional" is actually paid for with a heavy price.

Perry seems to think that people are trying to restrict her "creative" ability, but the sad thing is that it's the opposite: people are commenting on the fact that since Perry is a white woman, she's able to play the stereotype without feeling the negative effects. After her performance, she can take off the kimono and no one will expect her to act subservient or meek. Perry can perform as many racial stereotypes as she wants to (in her "Birthday" video, she plays up Jewish stereotypes) but at the end of the day, all it is for her is a performance. As a performer, it's irresponsible not recognize what a privilege that is.

The strangest part of this, though, is that Perry seems to think it's an either/or question. Either she can "appreciate" and pilfer from all the cultures she wants, or she has to stick to some sort of hokey all-American shtick. Not only is that incredibly demanding, but it also exposes her lack of creativity. There's so much in this world to draw inspiration from, why would anyone need to make a mockery of someone else's culture?

There's good news, though. Perry's new video for "This Is How We Do It" doesn't include any cultural appropriation. It's a start.