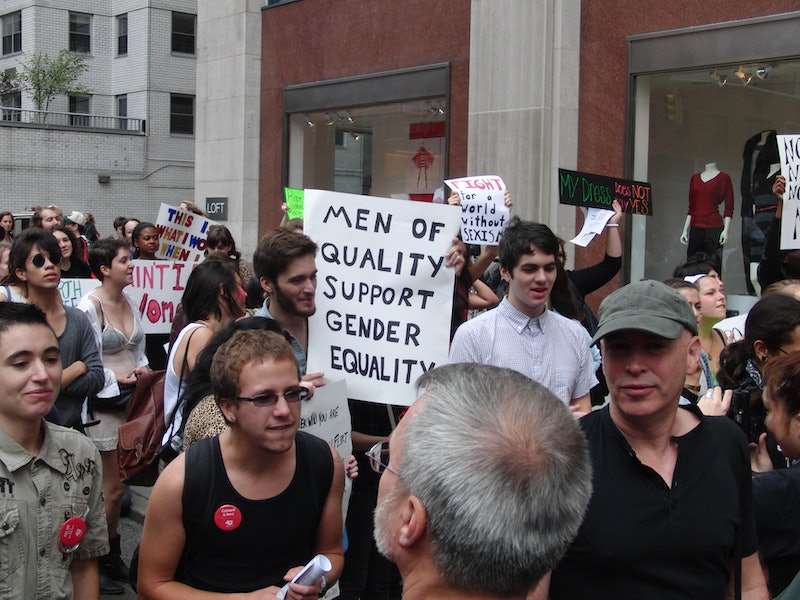 First there’s that song we’re all sick of: Robin Thicke’s “Blurred Lines,” which the singer had the nerve to suggest was a sexual liberation of women. This week there’s Hugo Schwyzer’s woman-blaming final salute to the Internet in New York Magazine.

There seems to be a sinister correlation between the number of times a man proclaims himself a feminist and the amount of hypocrisy and attention-seeking in his words and actions. Meghan Murphy at xoJane argues the “unpopular opinion” “It Pisses Me Off When Men Call Themselves Feminists,” saying “…[they] might be better off staying away from the title completely.” Though we should always view the phenomena critically, we shouldn’t prohibit guys point-blank from self-identifying as feminists.

Yes, there are many men who, to borrow Murphy’s words, “self-identify as feminist as a means of gaining credibility or avoiding accountability.” That’s the gentleman who thinks his mansplaining will have more impact if he prefaces with “I’m a feminist so…” and the dude who cries, “But what I did can’t be sexist, cause, well, I’m a feminist!” It’s annoying as hell, but we shouldn’t let some men’s misuse of the label nullify it as a designation for other guys. A total ban because some individuals are idiots is reductive, besides which, if we forbid the title, the only men who will stop using it are the ones who actually back up their words with actions. The pseudo-feminists will just keep on shouting from their megaphones (because they’re so far removed from the actual feminist community that they never got the memo).

But here’s the catch.

It’s cool for a man to call himself a feminist under the assumption that when he describes himself as such, he’s using it to designate himself as an ally, not to claim savior status, or an understanding of the perspectives of women, or a desire to guide the movement and run the dialogue. In other words, he must use it with the knowledge that, due to the inherent power imbalances of our system, “feminist,” in fact, means different things for men and women.

For men, who already enjoy the benefits for which the movement fights, to be a feminist is to be a supporter of women’s rights and equality for all, to appreciate the added freedom guys gain through the movement, but to do so in a way that does not make feminism all about them.

'Cause then that’s just a typical Wednesday.