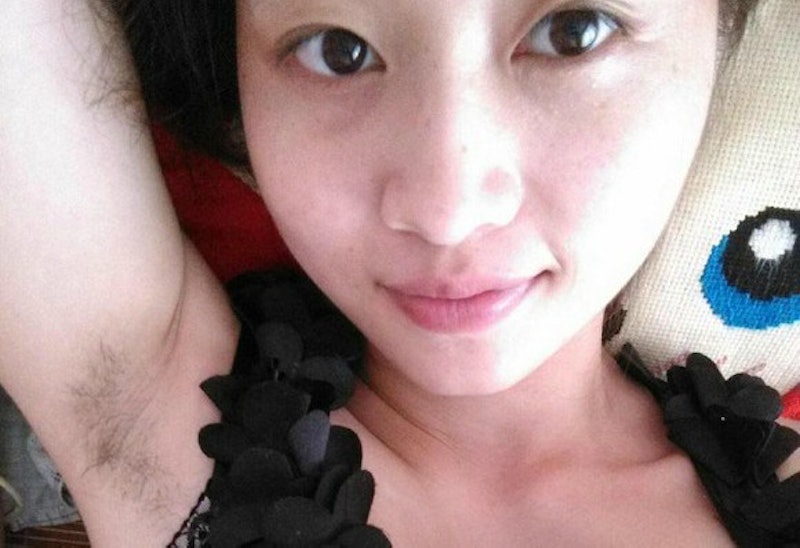 It’s becoming increasingly common for women to ditch their razors and embrace their body hair — and not just in the U.S. Women in China are currently participating in a hairy armpit competition on the country’s most popular social media platform, Weibo, and it’s my new favorite thing. Ladies? You seriously rock.

According to Rocket News (which, by the way, has one of the best taglines ever: “Bringing you yesterday’s news from Japan and Asia, today.” Maybe that’s where John Oliver got the inspiration for Last Week Tonight?), the trend has been taking Weibo on by storm. Its official name translates to “Girls Not Plucking Armpit Hair Competition,” and it’s pretty much exactly what it sounds like: Women all over China are snapping selfies of their unshaved armpits and posting them on the Internet. It seems only to be a competition in the loosest sense; there’s no prize or anything, and it doesn’t look like it’s a promo, but you know what? That just makes it even better.

As The Gloss points out, it’s possible that the American media (most of whom, like myself, don’t speak Chinese) are totally missing the point of the whole thing, so if that’s the case please let us know — but as far as we can tell, it looks like the hairy armpit competition is about turning beauty standards on their head. And that? Is super cool. Not only that, but it looks like all of the participants are having a lot of fun, too. Even the range of the types of pictures is fun. You’ve got your standard “Here’s my armpit hair, what are you going to do about it?” one:

The “I naturally don’t have a heck of a lot of body hair, but I’m joining in because this is awesome” one:

The “Look how luxurious my armpit hair is! (Shhhh, it’s actually my real hair threaded through my sleeve, but don’t tell anyone, OK?)” one:

And the “I’m a dude, but hey, armpit hair solidarity!” one:

What I love about things like the Hairy Legs Club, photographer Ben Hopper’s “Natural Beauty” project, and all of the other kindred movements out there is that it’s not about being anti-body-hair-removal — it’s about embracing the fact that you don’t have to remove your body hair if you don’t want to. You like to shave your legs? Great! You think it’s a waste of time and energy? Also great! As is the case with so many of these weird socially-imposed beauty standards, no one should ever feel like they absolutely need to or absolutely shouldn’t do something just because someone else said so. Just do you — and if “doing you” involves chucking your razor or using it daily, that’s cool. Everything is cool. Super, super cool.