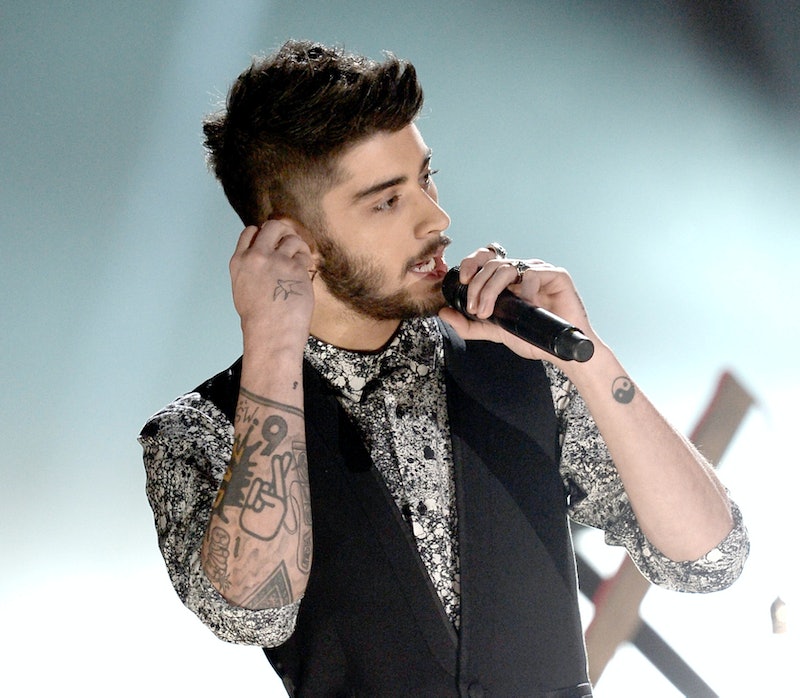 It’s hard to believe a year has passed since Zayn Malik and Perrie Edwards decided to get engaged last August — time flies when you’re in love (or in my case, busy paying attention to other things). But as we eagerly await the moment when the world will finally be blessed with a One Direction/Little Mix union, thus bringing together two great and powerful pop kingdoms, you might be wondering how the two met in the first place. I’ll be honest, it wasn’t my first guess (fancy pretty singer people party), or my second guess (Malik was highly intrigued by Edwards’ 1D fanfiction). It turns out, they met during the 2011 season of The X Factor, which Edwards’ band went on to win.

But that’s just where their story begins. For a more comprehensive look at couple’s history, here’s a complete timeline of Zayn Malik and Perrie Edwards' relationship:

Sometime during the 2011 season of X Factor — Malik and Edwards reportedly meet on the set of X-Factor. Celebrity couples: making other couple’s “we met through mutual friends” stories look even lamer by comparison one pairing at a time.

December 2011 — First reports surface of the two being an item. Presumably because Perrie saw this gif:

May 2012 — Photos of the two kissing surface and the tabloids declare them to be dating (which, in the grand scheme of tabloid reactions to celebrities swapping spit, is actually something close to restraint.)

August 2012 — Edwards and Malik officially become a bonafide celebrity couple with their first cheating scandal under their belts. They follow it up with a second round of cheating rumors the following month.

November 2012 — Little Mix posts this picture of Malik and Edwards new puppy to their Twitter account and you now have to choose between finishing this post or staring at his cute little face for the rest of your day/life.

December 2012 — Malik does that annoying boyfriend thing of not helping you with decorating projects. Luckily, he saved the situation with a clutch “ha sorry x” in the tweet he posted to document the occasion.

January 2013 — Rumors of Malik cheating surface for a third time, this time with an Australian waitress. Malik is later exonerated by the court of public opinion when fans (who maybe need a break from googling “one direction shirtless”) point out that the tattoos of the man photographed do not match Malik’s.

June 2013 — Malik gets a cartoony tattoo of Edwards on his right arm. Edwards later discusses the tattoo (and maybe reveals that Malik doesn’t know what a camera is) with Yahoo OMG! News, saying, "When I’m away from him, I guess he can just take a look at his arm and remind him of me. So it’s a lovely compliment really. I love it, it’s lovely.”

August 2013 — Malik proposes to Edwards and she accepts, which he later said was “quite sick.” Yup, just like a fairytale — every little girl dreams of that special day when her fiancé describes their engagement as “quite sick.”

May 2014 — Malik buys Edwards' mother a house which really just raises the bar for fiancés everywhere, but it also lets us know that almost a year after their engagement, they're still doing just fine..

So there you go. Big props to these two for weathering the storm of tabloid suspicion to their happily every after!