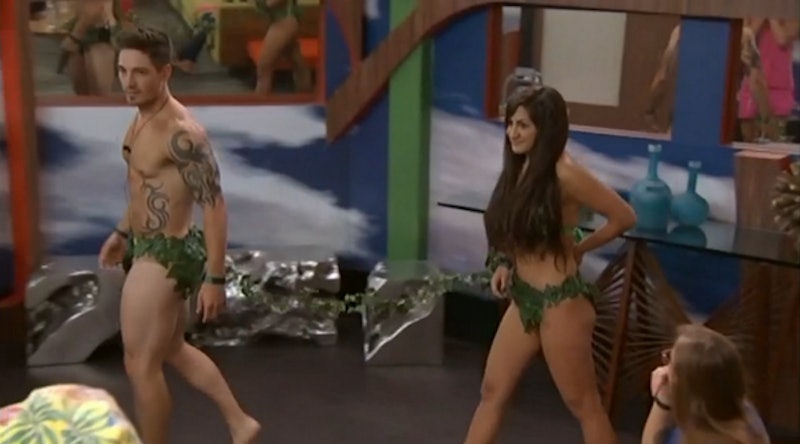 The outfits that have resulted from the competitions on Big Brother have been pretty interesting so far this season. For the most part, Nicole Franzel has usually been the one rocking everything from a frog costume to bright green suspenders, but with Nicole being one of the HoHs this week it was clear that this wasn't going to last. Now it's Caleb and Victoria's turn to spend some time in a ridiculous outfit. SPOILER: Nicole chose the two of them as her nominees during the ceremony and, in the aftermath of the Battle of the Block, they racked up penalties. Their punishments? First, Caleb has to shave his head. Second, Caleb and Victoria are both on slop for two weeks. Third, Caleb and Victoria will be tied together in Adam and Eve costumes for 48 hours.

Victoria is understandably worried about being tied to Caleb for two days. After all, it took him about that long to fall so madly in love with Amber that he essentially stalked and harassed her until she was evicted from the house. Caleb might not like Victoria now, but a lot can happen in the Big Brother house in two days. Especially when they're basically wearing a couples' costume and being pronounced "Beastmode Adam" and "Princess Eve". Caleb's best and worst quality is that he is a hopeless romantic and this punishment seems like the kind of thing that could just get him thinking that maybe he and Victoria are meant to be.

Frankie even seems to be encouraging this development by telling Victoria that she should use this as her opportunity to get close to Caleb because he goes out of his way to protect people he cares about in the game. It was a strategic move on his part. As he later told Nicole, he's "hoping that [Victoria] becomes the next Amber". Considering how completely Caleb torpedoed Amber's game, Victoria could be on her way out if Frankie's plan goes off without a hitch.

Then again, Caleb seems to have fallen in love with Mariah, Nicole's best friend from home who he has never met, and is more concerned about having to shave his head than about being tied to Victoria, so Victoria might be safe from his obsessive affections for now. Either way, those matching costumes are the most hilarious — and revealing — ones we've seen on the show so far. I doubt the audience is complaining.

More like this
The 'Big Brother 24' Racism & Bullying Controversy, Explained
By Jake Viswanath
What’s New On Netflix: 'Never Have I Ever' & 'Indian Matchmaking' Return
By Arya Roshanian
Everything To Know About The HBO Max & Discovery+ Streaming Service Merger
By Brad Witter
What’s New On Netflix: 'Bridget Jones’s Diary' & 'Monster-in-Law'
By Arya Roshanian
Get Even More From Bustle — Sign Up For The Newsletter