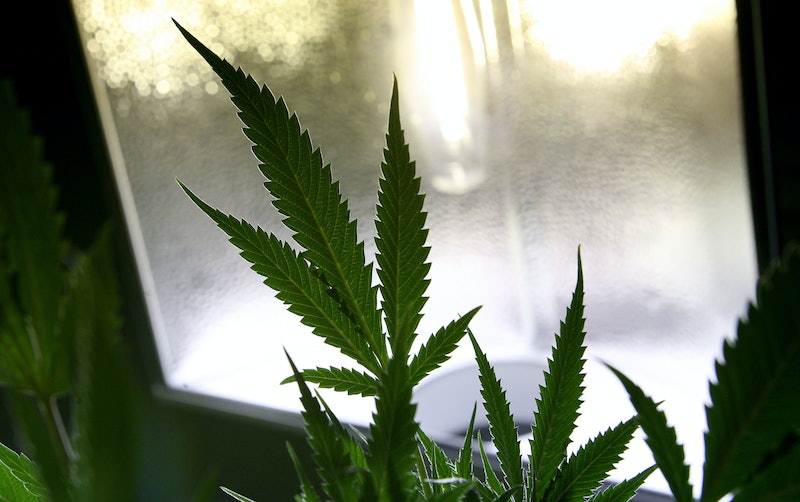 Leafly, the Yelp of weed, has made the ultimate move into the mainstream: a marijuana ad in the New York Times . The ad, which praises New York Governor Andrew Cuomo for signing the Compassionate Care act, may be the first-ever ad from a legal marijuana-focused company to run in a major national newspaper. The ad ran on a full page of the print paper on Sunday, nearly a month after Cuomo signed the law legalizing a very regulated medical marijuana program in the state of New York and just days after the paper itself endorsed legalizing the drug entirely.

In keeping with the air of respectability sought by marijuana advocates eager for legalization laws to expand, there are no dreadlocks dreadlocks or pot-leaf symbols to be seen here. Bucking stereotype, the ad depicts a middle-aged businessman entering a New York City brownstone as a woman in exercise clothing runs past. Next to each person floats a text bubble that explains the type of marijuana they have used for their medical conditions (MS and cancer, respectively). The text below the picture reads:

The first step in benefitting from cannabis is making informed choices. From learning about the right products and strains for you, to finding trusted clinics and dispensaries nearby, we'll be here to help.

It's a slick move for a company trying to expand beyond young people in areas where marijuana is entirely legal or at least decriminalized. Leafly is headquartered in Seattle, Washington — one of only two states where weed is completely legal (the other, in case you've been living under a rock, is Colorado). But as many more states are decriminalizing or at least granting medical status to the drug, legitimate businesses have an interest in expanding their core market beyond college students and Phish enthusiasts. "Patients need a reliable, mainstream information portal about cannabis that is free of classic stoner stereotypes," said a press release on Leafly's blog, "and we truly believe that Leafly is the resource for them."

It's true that where marijuana is completely legal, Leafly is no doubt used by people merely seeking to unwind with some friends and a big pile of snacks. But since the site stays on the legal side of the discussion, it only features reviews and connections to legal storefronts and dispensaries. So the trailblazing ad may have more truth than you think. Most of Leafly's customers nationwide are probably not your typical stoner. They're more likely to be like Ian, that well-dressed fellow with the nice apartment, who's just looking to manage his condition.