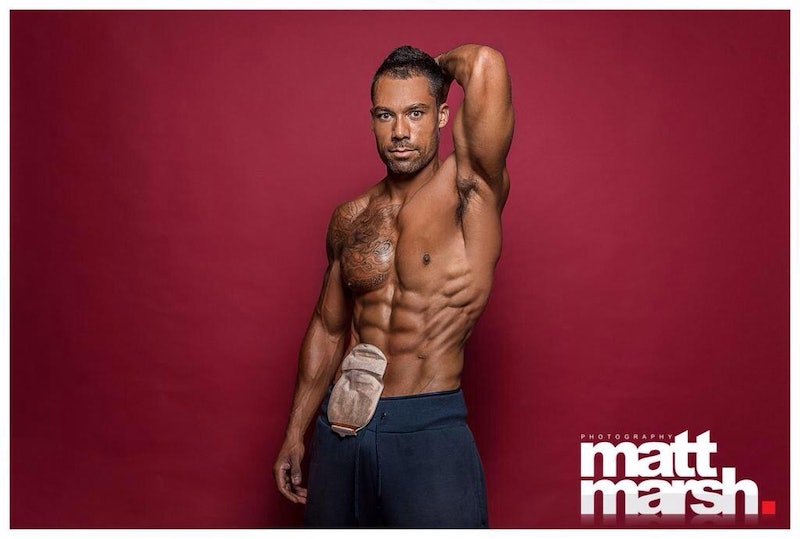 A lot of so-called trends these days baffle me (does that mean I’m getting old?) — but one that I’ve definitely been able to get behind is all the folks who were told they’d never achieve their dreams because of their medical conditions totally kicking butt regardless. Joining aspiring model Bethany Townsend and Miss Idaho winner Sierra Sandison in the “IDGAF, I’m doing it anyway” corner today is Blake Beckford, a body builder who hasn’t let either ulcerative colitis or his colostomy bag stop him from becoming one of the fitness world’s rising stars. Why hide it if you don’t need to?

Beckford had dreamed of making it big in the fitness industry ever since he was a kid. Now 33, he began training seriously when he was a teenager, only to find his hopes seemingly dashed a few years later. “I was trying to go to the gym, but I couldn’t eat afterwards because I felt sick, or I was so fatigued that I couldn’t get there in the first place,” he told Men’s Fitness. He finally went to see a specialist in 2003, at which point he was diagnosed with ulcerative colitis. Beckford battled the condition for 10 years; in 2013, though, he suffered through the worst flare-up he’d ever had. He knew something needed to be done, so in October of that year, he underwent a sub-total colectomy laparoscopically, a procedure that removed his colon and gave him an ileostomy.

Recovery was difficult; he underwent two additional surgeries due to complications, lost a ridiculous amount of weight, and had to be fed through a feeding tube. Doctors told him he’d never train again. He wrote on his website: “When you go through surgery some say you grieve… I didn’t grieve because I had a bag, but I did after I was told I would be very unlikely to achieve the fitness goals I had always aspired to. Hearing this after having surgery to remove this awful disease that’s held you back for all this time is incredibly hard to deal with.”

But you know what? Screw that. Beckford started small, reports Men's Fitness: He made daily goals as simple as walking to the end of the street. Then he started doing pilates and yoga to re-strengthen his core before finally heading back to the gym. And now? Well, here’s your proof that nothing is impossible:

According to the Huffington Post, the photos were shot by British photography Matt Marsh; Beckford hopes that the series, along with his hashtags #FightWithBlake and #IBD, will raise awareness for inflammatory bowel disease, as well as provide an inspiration for others. “I am determined to show people and society that having a stoma doesn’t change who you are and it doesn’t mean you’re not normal,” he writes on his website. “It means you can achieve anything you want to do, you can be attractive, and you can lead a normal life.” Ayyyyy-men.

More like this
Wimbledon Alters All-White Kit Rule Amid Candid Period Discussions
By Catharina Cheung and Rachel Mantock
Emily Ratajkowski & Pete Davidson's Astrological Compatibility, Revealed
By Nina Kahn
Dorinda Medley Has Holiday Hosting Down To A Science
By Brittany Leitner
Hailey Bieber Has A "Painful" Ovarian Cyst "The Size Of An Apple"
By Radhika Menon
Get Even More From Bustle — Sign Up For The Newsletter