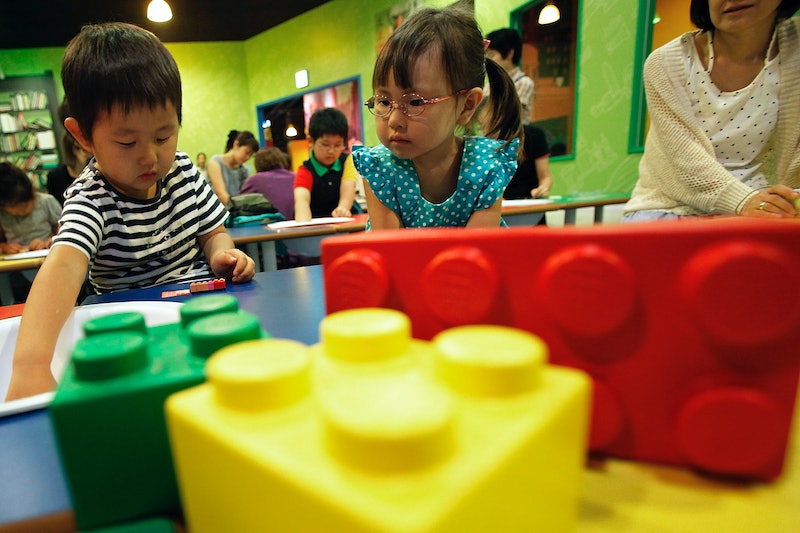 Two months ago, we welcomed the news that LEGO would be introducing a "Research Institute" set, featuring a cast of all-female Minifig scientists. Perhaps inspired by 7-year-old LEGO fan Charlotte's impassioned letter about the scarcity of female Minifigs, the creative minds at LEGO concocted a set that would show women doing more than just "sitting at home and shopping" (in Charlotte's words). Apparently, we weren't the only ones to get excited, because there was so much demand for the new set that traffic crashed the site and "Research Institute" sold out in a few hours after its release on August 1st.

The set, which was envisioned and submitted by Swedish geochemist Ellen Kooijman, includes a paleontologist, a chemist, and an astronomer, along with scientifically-minded accessories (a telescope and dinosaur skeleton, among others). According to LEGO enthusiast and blogger Jay, the LEGO site crashed due to high demand within hours of releasing "Research Institute." four days ago. Shortly thereafter, when it became operational once more, it sold out of the set completely. The LEGO website lists it as one of its top sellers and says that it will be back in stock on August 17th.

The reviews are almost entirely positive. Here are a few excerpts from satisfied customers:

"I am a middle school science teacher, so this set was a must for me! I bought it with the intention of keeping it on my desk at school, but my 8-year-old daughter loves it so much, it will probably stay home...I loved sharing a set with my daughter that focused on women in fields of science."

"This 'Research Institute' set is a great gift for anyone, ideal for children and youth as it encourages "girl power" and education. Lego Ideas has released another awesome set."

"This is the best Lego experience ever. I have waited for the research lab to enter the Lego world."

After the step backwards that was LEGO Friends, a "pinkwashed" set that claimed to cater to what girls really wanted (and which was based on some vague notion of "research"), it seems as if LEGO has really hit its stride when it comes to toys marketed at girls. This comes as a welcome relief. A cursory look at the "Girls" section of the LEGO site will reveal sets with names like "Model Catwalk," "Heartlake Shopping Mall," and "Olivia's Ice Cream Bike."

To be clear: I don't mean to imply that girls should never play with pink, glittery, lipsticked toys and dolls. However, when those kinds of products saturate the market, where are girls who don't want to build another mall or dollhouse supposed to turn? The trend of producing "girl-friendly" toys like Miss Possible dolls and GoldieBlox is meant to provide alternatives to traditionally feminine products, not to make every little girl into a would-be STEM major. That's why the sudden popularity of the "Research Institute" set is important: it demonstrates a demand for Minifigs that don't look like the LEGO Friends sets.

In the meantime, LEGO sent Kooijman one of the first sets for her to review. Her take: a resounding success.

"Personally, I think the play value of the Research Institute set is quite high," she wrote. "I can easily see the science stories unfolding, but maybe that’s just my nerdy imagination. My astronomer Dr. B.A. Star panicked when she spotted an asteroid plummeting towards Earth, the impact of which caused the T-rex to come alive and chase Dr. M.O. Lecule…cheers to science and good play!"

More like this
Designers Say If Your Home Doesn't Have Any Of These Things, It Looks Outdated
By Claire Epting
Walmart's Pre-Black Friday Sale Is On — And Here Are All The Cool Things Worth Buying
By Kate Marin
Of All The Black Friday Deals On Amazon Over 50%, These Are The Sales You Don’t Want Miss
By BDG Commerce
21 Absolutely Adorable Christmas Gifts For Dogs
By Carolyn Steber
Get Even More From Bustle — Sign Up For The Newsletter