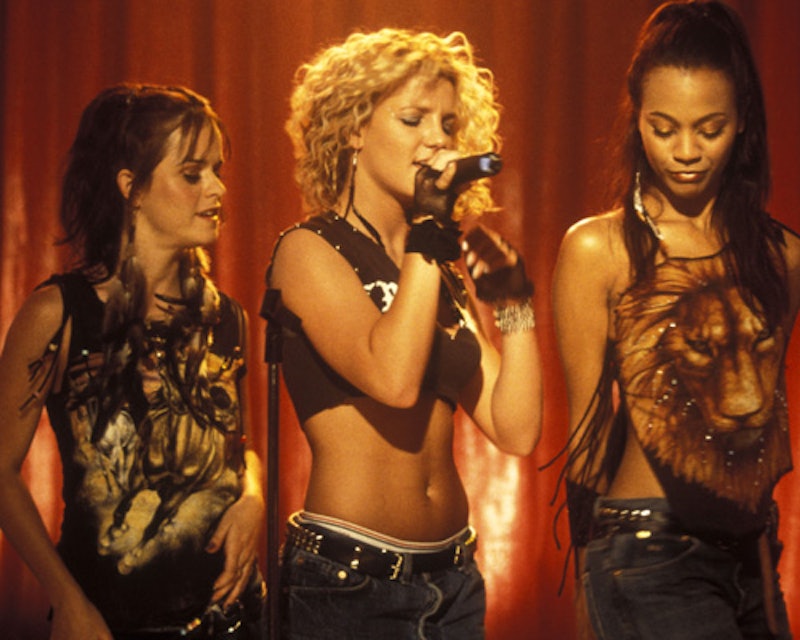 Remember Crossroads? Don't lie. Of course you do. It's not cool anymore to pretend you that didn't see it. You totally saw it with your ~best friend forever~ back in 2002. As I'm sure you'll recall, the movie was many things: It was The Britney Spears Movie, it was a road-trip movie, it was a coming-of-age film complete with a miscarriage and a hell of a lot of plugs for Herbal Essence, but most of all, it was not very good. So why does Britney Spears want a Crossroads 2?

OK — maybe she doesn't exactly want a sequel to the movie that made her a laughingstock among movie reviewers. However, she at least hinted at a reunion, and with relatively good reason. Spears tweeted a thank you to Zoe Saldana for coming to her defense when Saldana, hot off of her ass-kicking role as the coolest green lady ever, Gamora, in Guardians of the Galaxy, was asked about Britney Spears' leaked songs sans-auto-tune on Bravo's Watch What Happens Live. Saldana stuck up for her former co-star and pal; that's what Cross-friends are for. She was super classy when the whole interaction could have been super awkward. I mean, it wasn't like the two filmed the Citizen Kane of our time or anything.

Yup — with a GIF of Spears, Saldana, and yes, Taryn Manning (or as you may know her now, Pennsatucky) swayin' side to side in a car, as BFFs do when they cinematically travel across the country.

But if the cinematic and Spears-summoned forces defied the laws of bad movie reviews and Crossroads 2 actually came to fruition, I highly, highly doubt that Saldana would jump from the critically acclaimed and box-office-thumping Guardians of the Galaxy to that project, and I also doubt that Manning would take a break from Orange Is the New Black to breathe life into a pretty dead sequel, but assuming they did ... and assuming Crossroads 2 were to actually happen ... what should it be like? I've got a few thoughts.

Saldana + Manning + Spears would make for quite a trio now. A Marvel heroine, a Litchfield scene-stealer and Britney? Yes, I would watch that.

It Takes Place In Real Time

No age-defying make-up here. We're picking up today in 2014. They're all in their 30s. This is a movie about women in their 30s finding themselves. It's dedicated to women who have nightmares about childbirth and the media's obsession with weight loss products.

They Would Play Themselves

Screw the characters they play! This is about Zoe Saldana, Taryn Manning, and Britney Spears. Cameos from Spears' kids would be welcome. Everyone asks Saldana about Center Stage at least twice.

They Have To Travel Cross-Country Together

So basically, it's just Saldana, Manning, and Spears in a car for approximately 95 minutes.

It's Actually A Documentary

So, yeah, Saldana, Manning, and Spears in a car for approximately an hour and a half IRL. Awkward silences included, and of course, there's one dramatic fight when someone gives spoilers for Season three of Orange Is the New Black. Spears cries at one point and wonders if she's still relevant, but the other girls come to her rescue because of course she is. She's Britney, bitch!

They All Sing "I Love Rock 'n Roll" At One Point, Preferably In A Karaoke bar

It was the song of the original movie. It must be revived and re-lived. Begin the renaissance by watching it above.

... Where road trip documentaries about three celebrities are meant to thrive.