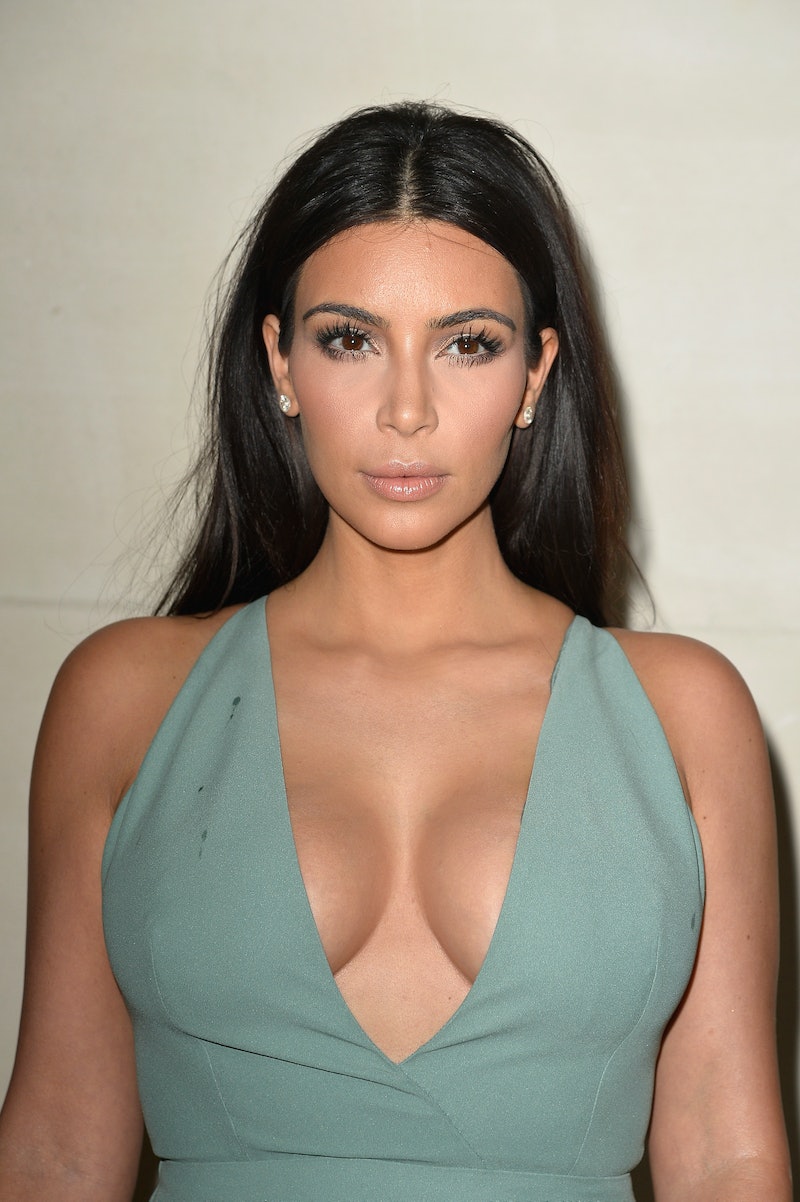 It looks like Kim Kardashian has finally figured out that she's been contradicting herself. Lately, Kardashian has been overly preoccupied with her weight. For example, Kardashian posted a Photoshopped picture of herself as her "thinspiration" — aspiring to a level of skinniness that she's never even had — and followed that up with another throwback photo that made it clear that whatever she weighs now isn't nearly as good as what she used to weigh before she had North West. This has been a source of confusion and derision to those of us who aspire to Kim Kardashian's curviness, but Tuesday morning saw Kardashian finally find a less offensive way to discuss her weight. Instead of her usual whines, Kardashian opened a dialogue with other mothers about baby and post-pregnancy weight gain that came across as more thoughtful than she's been lately.

"Off to an intense workout. Can't seem to shake this last 15-20 [pounds] of baby weight," Kardashian began in a series of tweets. "No more excuses. My baby is 1 years old! UGH!" She then went on to deride herself for using the phrase "baby weight" as an excuse and share her experience with other mothers on Twitter in the hopes that they might know what she was going through.

For the first time, Kardashian's desire to return to the weight she was a few years ago feels less like she's body shaming herself and more like she's genuinely trying to return to what she perceived to be her ideal weight after becoming lax on her exercise routines. The entire problem with Kardashian's constant weight talk was not that she wanted to get in shape and keep herself healthy, but that she continued to shame her own body with phrases like "UGH" and "#SkinnyDays" as if her current shape was anywhere even close to obese.

Maybe it's the fact that Kardashian has promised that she's not going to complain about her weight anymore, but this Twitter rant nonetheless marks the first time that her complaints are refreshing rather than annoying. Kardashian is going through something that everyone goes through — the horrifying realization that they've gained weight without noticing and have strayed outside their ideal body look — and instead of hating herself or her body she has opened up a dialogue and welcomed support from others who have experienced the same thing.

If she can follow this up with a refusal to post any more #SkinnyDays pictures on Instagram, then I think we can start to consider Kardashian a sometimes champion of healthy body image again. You know, if you ignore the fact that Kardashian's video game only allows one body type. That's a whole separate problem.