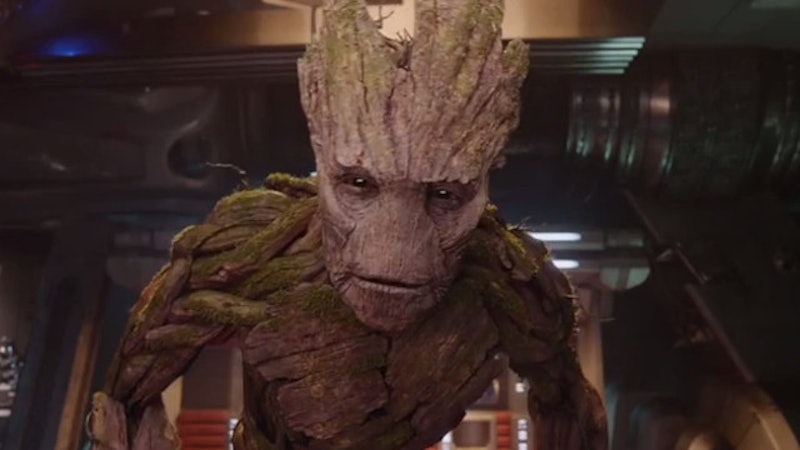 If you saw Guardians of The Galaxy (and if you haven't — GO SEE IT! You're missing out on a damn good movie!), then you know that the movie is filled with general awesomeness from Chris Pratt's goofy Walkman-toting action hero to Zoe Saldana's ass-kicking to Bradley Cooper's wisecracking raccoon. However, there's one little character who — despite his size — outdoes them all, and that's Baby Groot, the greatest dancing tree-baby-superhero of all time.

So, who exactly is Baby Groot? Prepare yourself for a SPOILER ALERT if you haven't seen the movie yet. Baby Groot is the life that regenerates after the big Groot (Vin Diesel) dies from protecting all of the other Guardians in an enormous cocoon of his branches. When he bursts everywhere, his pal Rocket Raccoon (Cooper) takes a remaining branch and places it into a pot, which ultimately becomes an adorable superhero in its own right. As the movie nears its end, Baby Groot busts several moves in his potted fixture to the Jackson 5's "I Want You Back," and it's funny, unexpected, and totally worthy of the Internet's love.

Unsurprisingly, the Internet has indeed fallen head over heels for with this dancin' baby tree hero, so here are a few Baby Groot GIFs for ya. Consider his father Groot a version of "The Giving Tree."

Note: You should play the music below for the best results.

Okay! Got that soundtrack goin'? Now proceed! Er, I mean, "I AM GROOT."

If those few GIFs don't make your day then I don't know what will. Maybe a Baby Groot combined with a Corgi... or having your own Baby Groot?

If you want your own dancing Baby Groot, you should know that there are rumors — and the operative word there is rumors — circulating that there may be a dancing Groot toy, thanks to fans who really want some to call their own. For now, take a Groot toy and stick it in a pot for a plant and make it dance with your hands.

But for now, at least you've got this: