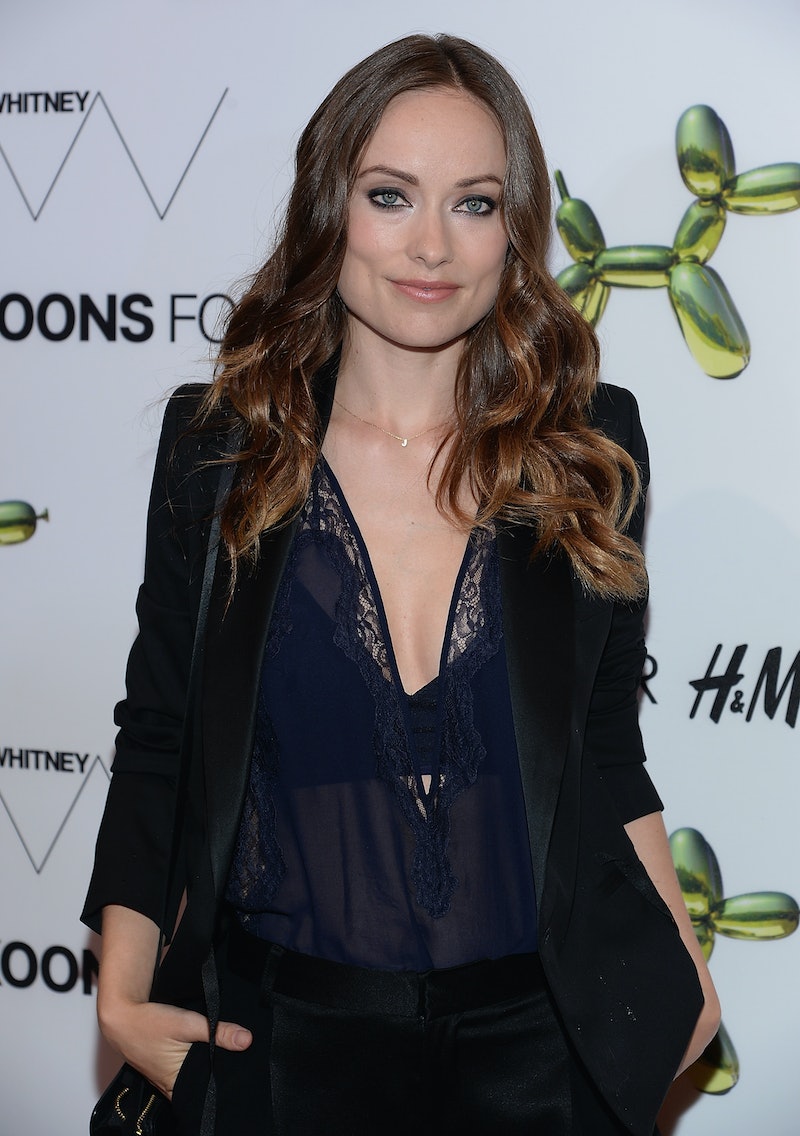 She's only been a mother for three months, but already, Olivia Wilde is proving she's one of the coolest celebrity parents out there. First, there was the matter of her son's first name: Otis, in tribute to the '60s soul singer. Then, there were all those tweets, funny and relatable and delightfully weird ("a breast pump looks like something Katy Perry would wear to perform at the VMAs"), and that sweet photo, fittingly labeled "rock and roll, baby." Now, Wilde is posing in magazine spreads while breastfeeding her child, because in addition to being funny, talented, and a crazy cool parent, Wilde is also a hardcore feminist.

In a photoshoot for Glamour, Wilde, who's spoken out about her feminism before, poses several times with her infant son, including sitting for one shot showing her breastfeeding. It's a gorgeous photo, featuring the dress-clad actress in a diner booth with Otis at her breast, and one can imagine it might've been a bit awkward to shoot. According to Wilde, though, being photographed breastfeeding Otis felt natural, not uncomfortable.

"Being shot with Otis is so perfect because any portrait of me right now isn't complete without my identity as a mother being a part of that," she told Glamour. "Breast-feeding is the most natural thing. I don't know, now it feels like Otis should always be on my breast. It felt like we were capturing that multifaceted woman we've been discussing — that we know we can be. You can be someone who is at once maternal and professional and sexy and self-possessed."

In the interview, the actress credits her mother, the renowned journalist Leslie Cockburn, for teaching her that while achieving a life/work balance may be difficult, it's doable.

"My mom is such a badass working mother," Wilde said. "That inspired me when I was pregnant. I wasn't going to sacrifice myself because I was becoming a mother."

Clearly, she hasn't. Since giving birth to Otis, Wilde has promoted a film, Third Person, performed in comedy shows, and signed on to produce and star in an upcoming drama. And with the breastfeeding photo, she's helping to erase the stigma of the act, which sadly still looms large. Sure, she's a bit fancier than the average new mom ("I certainly don't really look like that when I'm [typically] breast-feeding. And there's usually a diaper involved," she said), but by putting the photo out there, Wilde's easing the notion that breastfeeding is something to be ashamed about.

And she's certainly not trying to keep anyone under the illusion that breastfeeding is as dainty as a fashion spread may make it seem. Along with the photo, Wilde tweeted, "Otis ordered milkshakes. Luckily I had some on me. Then he peed on my dress. Good kid. #boobfood #whennaturecalls." Like I said: coolest mom there is.

Check out the photo below: