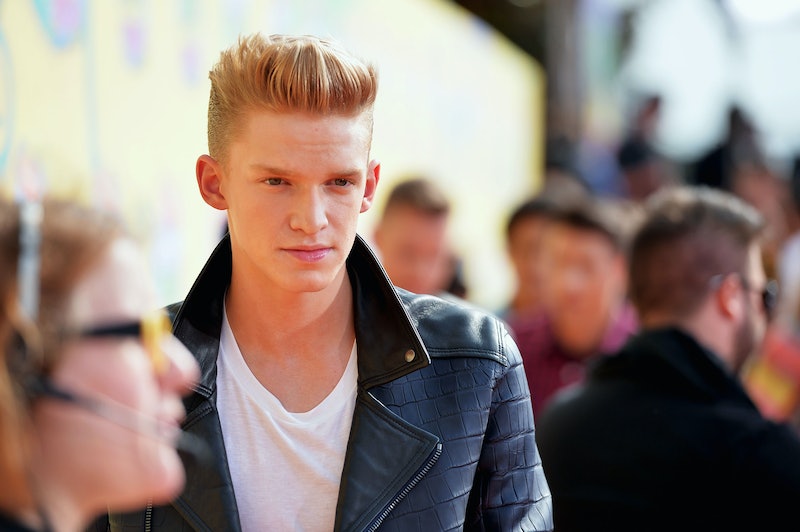 For some unfathomable reason, we don't normally equate teenage boys with fashion. Could that be because, I don't know, most teenage boys wear rumpled American Eagle button downs when they want to feel "fancy" and saggy-butt jeans the rest of the time? But perhaps I'm being short-sighted because Vogue recently polled a group of stylish teen boys about fashion and they actually had some wise words!

With advice ranging from, "Just don’t care sometimes. Comfortably chic is everything" (thanks, Zach Coffman of Chicago) to "Thrifting is more than okay!" (hat tip to Betts DeHart, cofounder of Lucid FC) it's clear some young gentlemen know their way around a well-curated closet. Maybe I've been underestimating post-pubescent males all this time! I've been blinded by too many oversized baseball tees and visible Smurf-printed boxers, but the fashionable teens of Vogue have shown me the light. Teenage boys are a fount of sartorial knowledge!

The Vogue feature got me thinking about what other style tips I could glean from chic male adolescents. Since I'm a 23-year-old woman who is practically allergic to anyone under the age of 19, I turned to a staunchly reliable source: celebs. What do the most fashionable youthful males have to say about style? Read on to find out!

The question in this video asked Australian pop star Cody Simpson to elaborate about what girls should wear, but his wise words can go for anyone. "Fashion, you know, it's always been an expression of your personality and stuff so it's pretty much whatever you would like, but just definitely keep it classy." WORD. (Is my age showing?)

2. Be inspired and original

R&B group Mindless Behavior is known for coordinating ensembles, but they each recognize that originality is key. Ray Ray told AP Entertainment "When you look up to a lot of different people in the fashion world you can get influence, which is pretty cool [...] but I really try to do my own thing so the generation after me can look up and say, you know, 'I like Ray Ray.' I just do my own thing, make my own style. Just wear what I wanna wear that day."

3. The shoes make the man

The ever-charming Rico Rodriguez (Manny Delgado on Modern Family) is no slouch. His sense of style puts most 16-year-old boys to shame, but according to Rodriguez, fashion is actually pretty simple: "It's the shoes, I mean, you always have to have cool shoes [...] I think what makes a person is their shoes." Duly noted.

Jaden Smith might be of enviable lineage, but that doesn't make him immune to critique when it comes to style. In an interview with The Life Files he said, "I have this image in my head of what I think an amazing fashion person would look like, and I really just take whatever I would want to wear and I just put it on. Sometimes you get criticized for it, [but] give it two months and everybody’s wearing it." What a little trendsetter!

5. Don't be too matchy-matchy

Singer Austin Mahone likes a good coordinated outfit, but he admits he overdoes it sometimes. "I match my clothes too much. My mom always told me to match my clothes really good and sometimes I overmatch. I’ll wear a blue hat with blue shorts with a blue shirt with blue shoes. Too blue! A lot of times, people will be like, ‘You’re not good today!" Learn from Austin's mistakes and introduce some contrast!

6. A little bit of punk is always cool

The boys of 5 Seconds of Summer have made it clear that they are no boy band, with a rough-around-the-edges image that includes colorful hair, visible tats, and ripped band t-shirts. Their message? Never be afraid of punk fashion! From a profile in Billboard:

Some rolled their eyes with disdain when [Luke] Hemmings wore a Misfits T-shirt onstage at the BBMAs. “People were saying Glenn Danzig would roll over in his grave — and Glenn Danzig is still alive,” laughs [John] Feldmann [of Goldfinger], who’s not the only major pop-punk personality to stand up for 5SOS.

7. Play it cool, no matter what you're wearing

Brooklyn Beckham practically popped out of the womb onto a magazine cover (okay, so he's actually just getting started with his modeling career). What I mean is, looking like a Tom Ford model runs in his bloodstream, so he doesn't have to try very hard. Throw on a suit and aim that smolder at the camera and boom! A style star is born. What can the normals learn from his #wokeuplikethis brand of fashion? Always keep your cool, whether you're wearing fuzzy sweatpants or a Hugo Boss tuxe.