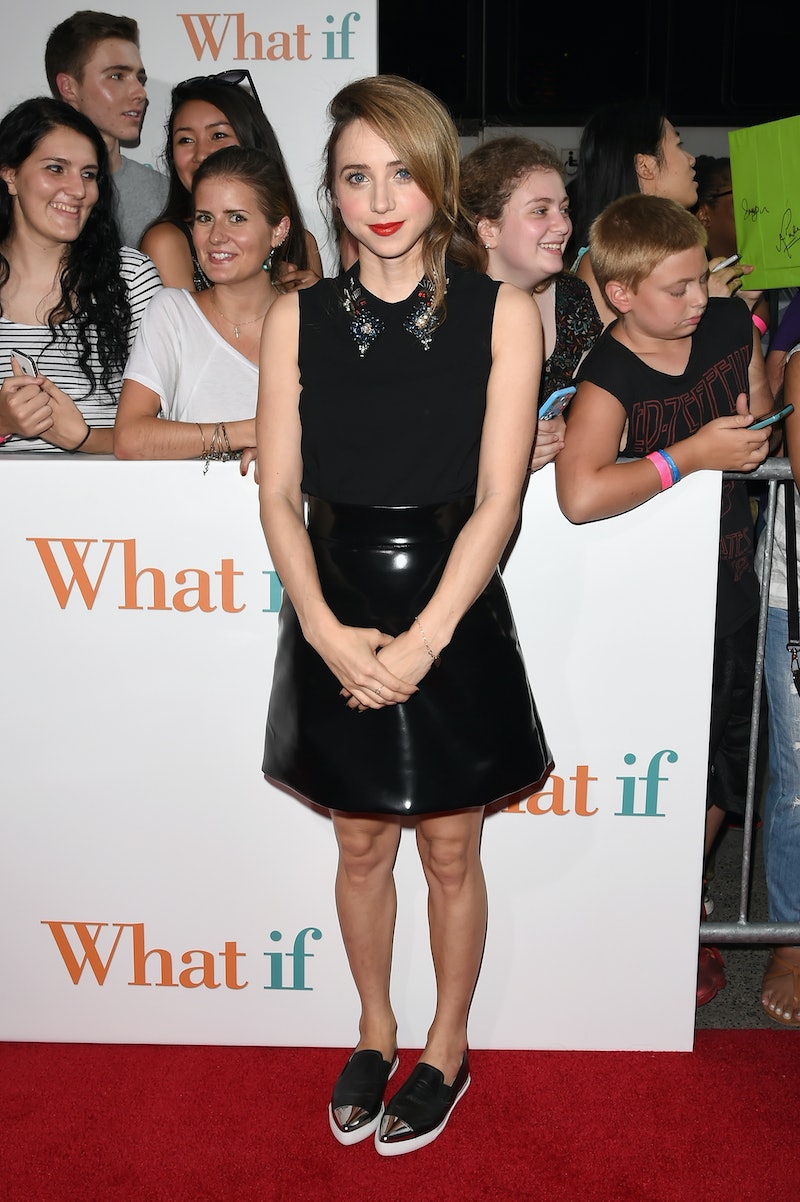 As a lifelong and extremely — almost obsessively — dedicated Harry Potter fan, it doesn’t surprise me one bit that actor Daniel Radcliffe is stirring up insane levels of buzz and excitement along the press tour for his most recent film, romantic comedy What If. And I’m not talking about screaming-fan-girls kind of buzz. I’m talking about the kind of buzz that resulted in having to cancel the Mexico premiere for fear that die-hard fans would trample Radcliffe, along with the former Harry Potter star having to literally comfort a hysterically crying girl on the red carpet who was just that thrilled to see him. (Oh, and Radcliffe also had to attend Comic-Con in disguise because, you know, he's just so popular.)

Despite all the attention the 25-year-old Brit is getting, there’s another star who deserves a second look, too, particularly when it comes to her style sense: Zoe Kazan. The actress, who stars alongside Radcliffe in the soon-to-be-released movie, has long been holding her own on the red carpet, looking pretty in her little pink dresses and in-your-face printed ensembles.

But at the What If NYC premiere, Kazan’s fashion choices took a turn for the insanely adorable when she sported one of the most charming outfits I’ve seen on the red carpet since Elle Fanning's floral mini dress at Comic-Con.

Decked out in Miu Miu from head to toe, Kazan proved once and for all that she’s one star who knows how to look cute without looking twee. And because I know you want to do the same, here are three lessons you can learn from the star’s ensemble:

Next time you're ready to shop for an adorable collared shirt drenched in pretty sequins or dazzling rhinestones, make like Kazan and search for a piece that's otherwise neutral, like a simple black tank or a plain white button down. Tuck it into a shiny leather skirt in a girly silhouette and, voila, you're sure to look sweet.

2. Pair your outfit with one accessory that's a wee bit edgier

Too-cute flats or girly heels may have thrown Kazan's entire look into twee territory, but her metal-capped slip-ons give the ensemble just the perfect amount of edge to keep it balanced. Can't find similar shoes? Then opt for an accessory like a studded clutch or purse to rough things up.

Kazan's loose, shiny ponytail couldn't be more romantic, which is why the bright and sexy red lip is the perfect complement to keep her beauty look from reading too sweet. Try the combo yourself, or switch it up with a rosy cheek and lip paired with a slicked-back pony or fierce, sleek locks.

More like this
Rita Ora’s Sheer Dress & Mermaid-Inspired Prosthetics Stun At British Fashion Awards
By Sophie McEvoy
Florence Pugh’s Bra Top & Fringe Skirt Are Giving High Fashion Goth
By Dominique Norman
The 8 Coolest Haircut Trends Of 2023
By Audrey Noble
Dua Lipa On YSL Beauty, Plus Her Fearless Approach To Hair & Makeup
By Erin Stovall
Get Even More From Bustle — Sign Up For The Newsletter