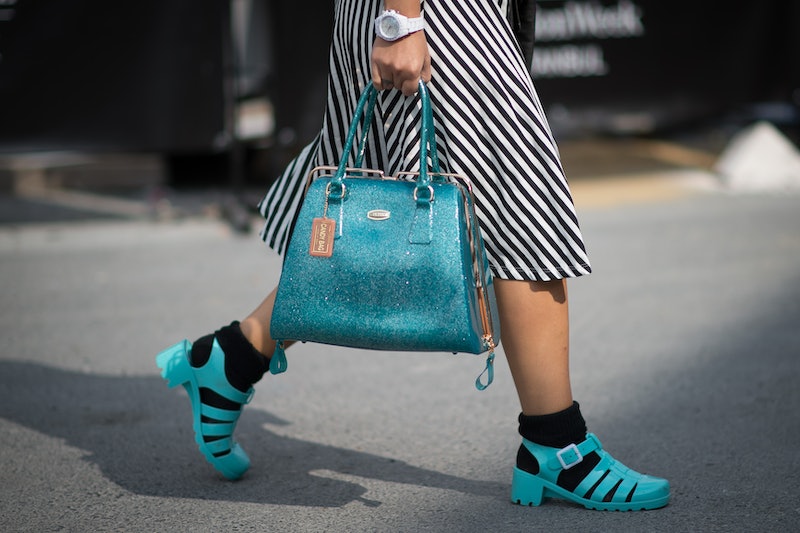 Childhood may be a time of innocence, but more often than not, it's marked by a desperate desire to own, own, own. No one is more susceptible to trends than children, and a tearful "But all the kids are wearing it!" is a cry desperate enough to break a mother's heart. And what were all the kids wearing in the 1980s? Jelly shoes, my blistered friend. Jelly shoes in every sparkly color of the rainbow.

Like the other hilarious throwback items we've been examining here at Bustle, the jelly shoe has an oddly checkered history. According to the LA Times, jellies probably originated somewhere around the late '50s to early '60s, when plastic became so common that even fashion designers began to play around with it. Note this "racing car shoe" from 1965, made mostly of plastic. Hip, no? But while plastic was already on shoemakers' radars, it wasn't until the '80s that the jelly boom began. Really, it was a perfect storm: The '80s were already obsessed with all things bright-colored and highly synthetic.

According to one legend, the jelly shoe sprang into American prominence at the 1982 World's Fair in Knoxville, Tennessee. It was a Wall Street fairy tale: Their champion was a former bank president named Preston Haag Sr., who quit his lucrative job in order to find a career that would involve his family. When he flew to South American to look for products that weren't being exported to the United States, he was struck by the bright, cheap shoes worn by many Brazilian women. They were being manufactured by a tiny factory called Grendene, and Haag quickly decided to get in on the jelly game and distribute the plastic shoes in the US. After the World's Fair, jellies were officially on the map, but Haag's lucky break came a year later, when a buyer for Bloomingdale's ordered 2,400 pairs in nine different styles.

In order to keep jellies moving full steam ahead, Haag decided to make them hip, varied, and expensive. They may have been cheap in Brazil, but this was America, baby! Haag teamed up with four well-known designers — Dorthee Bis, Fiorucci, Thierry Mugler, and Jean-Paul Gaultier — and made sure the styles of jelly shoes changed every six months, to keep his company ahead of the competitors. As Haag told the Ocala Star-Banner in 1985, "The key has been keeping the shoe in high-fashion. We refuse to sell [the shoe] in discount stores. That would hurt the positive image we've built up."

It's possible, though, that Haag wasn't actually the Great American Jelly Shoe Originator. A 1980 New York Times article cites a different origin story. Apparently shoe manufacturer Bert Geller spotted plastic shoes on Greek hotel workers and, smelling a profit, began manufacturing them at home. Geller sold his jelly shoes at Saks Fifth Avenue and Macy's for around $20 a pair. The New York Times article mentions society ladies buying jellies in shades of "cherry" and "smoke gray," intending to wear them while gardening and washing the car.

The irony? Despite both Haag and Geller's attempts to make the jelly shoe something for high society to garden in, it's forever remembered as that cheap, tacky shoe that kids wore in the '80s. After all, it's a shoe made of plastic, and plastic can only feel so fancy for so long. Plus, the plastic gave you horrible blisters and locked in foot odor like no other. Jellies quickly sank in price — '80s fashion aficionados mention being able to buy them for as low as $1 a pair — and became the go-to for kids and teens. Since they were so affordable, kids bought them in every color, style, and sparkle-level under the sun. It wasn't unheard of to own a casual school-day jelly, a sparkly party jelly, and even an elegant, high-heeled jelly for New Year's Eve dinner.

Today, the jelly shoe is back and living in hipster neighborhoods all over the USA. It's been reinterpreted by high-end designers who dream, perhaps, of the days when Thierry Mugler designed them, and it's also being sold in heavy-handed ironic throwback mode by retailers like American Apparel. It's hard to imagine a future when jelly shoes don't scream '80s throwback, but at least you know you can go as highbrow or as lowbrow as you want with them, and either way is historically accurate.

More like this
10 Nail Trends That Perfectly Capture The Early 2000s
By Paris Giles
10 All-Denim Outfits Inspired By Billie Eilish, Bella Hadid, & More
By Allie Fasanella
Dua Lipa Just Took A “Pre-Show Dip” In A Dreamy Thong Bikini
By Allie Fasanella
‘90s Streetwear Brands That Are Making A Major Comeback
By Dominique Norman
Get Even More From Bustle — Sign Up For The Newsletter