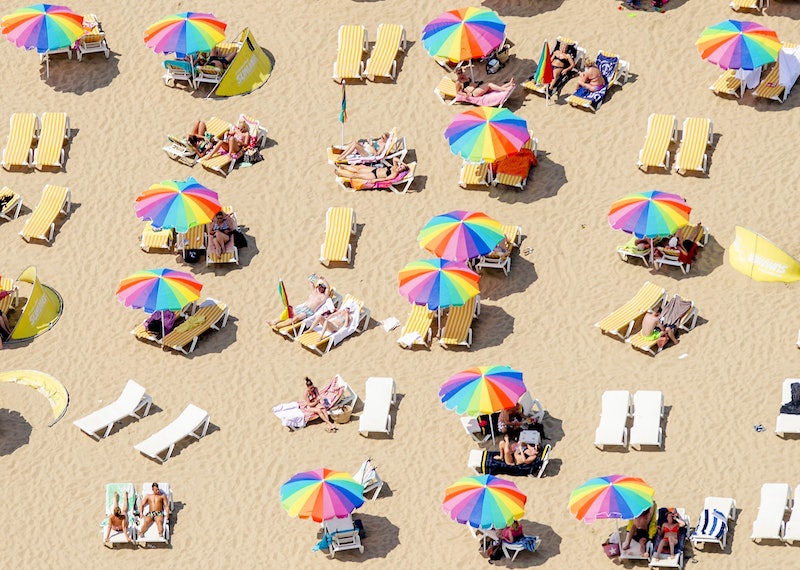 August (noun): Impending doom. OK, so I have a flare for the dramatics, sue me. But really, I could write you a thirty page thesis paper on how August is the worst month of the entire year. Why August when there are so many other awful months, you ask? Because August is a tease, my friends. It gets all hot and the flowers are looking real nice and you're tanner than ever (hell yeah) and there's an Oprah's Favorite Thing's amount of block parties and barbecues and music festivals and then BAM-- it's September. And it's chilly, and there's school (even if you're not in it anymore), and Winter's right around the corner, and you have to put away your flip flops that have perfectly melded to your feet and take out your stupid, feet-restricting, weather resistant boots.

The other thing that royally blows about August is that even while you're enjoying the heat and the sun you have that nagging feeling in the pit of your stomach, the one that reminds you that it's all going to be over soon. Before you know it you're going to be an iced caramel latte girl in a pumpkin spiced world and you're just not sure how to deal with it all.

Well, I'm here to help. To best commiserate that end of Summer onset depression you're experiencing or are about to experience once you've read this (sorry, y'all) here are some songs that accurately depict your melancholia.

We were all about cutting to the quick when we were in middle school, weren't we?

FAR MORE DANGEROUS THAN ANY WEAPON: "WAKE ME UP WHEN SEPTEMBER ENDS" BY GREEN DAY

Oh you didn't want to fall down a bottomless pit of despair? Well...

*Lays on deck with Strawberita in hand and faces existential crisis*

OH, YOU THINK THIS IS SUPPOSED TO BE A FUN SONG?: "SUMMER NIGHTS" BY THE GREASE CAST

Until you sit there and remember that they're talking about Summer in the PAST tense and they're at freakin' school. SO THINK AGAIN.

Oh remember that person you had a real connection with? WELL, YOU'RE NEVER GOING TO SEE THEM AGAIN (till Winter Break).

WHAT IS UP WITH THESE TITLES: "SUMMER'S ALMOST GONE" BY THE DOORS

As if we didn't already know, The Doors. Gosh.

IT'S BRIGHT EYES SO BRACE YOURSELF: "JUNE ON THE WEST COAST"

"You see sorrow gets too heavy and joy it tends to hold you, with the fear that it eventually departs..." WELP.

HERE'S ONE TO REALLY PUT YOU OVER THE EDGE BECAUSE I'M CRUEL LIKE THAT: "SUMMER IS OVER" BY JON MCLAUGHLIN FEATURING SARA BAREILLES

Bareilles, you slay me.