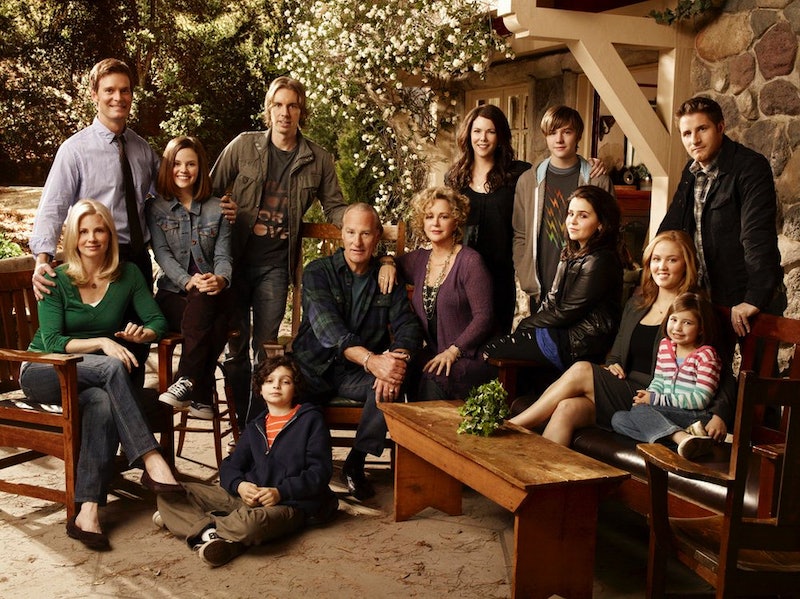 There have been many shows that have made us tear up throughout the years, but none have transformed us into a weeping, inconsolable pile of mush quite like NBC’s Parenthood , which is heading into Season 6, the final season. And with word that death could come to Parenthood, those tears are going to be even harder to quell. (If you have not, at some point, completely balled your eyes out or had some sort of emotional melt down over this show then I'd recommend running to the nearest doctor’s office and making sure that you actually still have a heart. Seriously though, this series is a total sobfest, and I mean that in the best way possible.)

Throughout the years we’ve witnessed the Bravermans go through incredible highs to extremely depressing lows. From Crosby and Jasmine’s wedding to Kristina’s cancer to Amber’s relationship woes — every single moment has not so much pulled, but rather yanked at our heartstrings and forced us to care for this family as if they were our own.

So where am I going with this? Writer and producer Jason Katims has recently teased that Parenthood 's Season 6 will present "a huge new challenge" that he assures will impact everybody on the show. And while he hasn't come right out and said it, many fans are speculating that this could mean someone is going to die by the series finale. So we all might as well start stocking up on Kleenex right now because, if that is the case, those scenes are definitely going to be a new form of emotional torture.

But it makes sense, though. One of the great things about this show is its ability to be relatable in so many different ways. Divorce, cancer, Asperger’s, engagements, breakups, child birth — these are all things actual people experience all over the world. Death is one of the few topics this show hasn't really covered, with the exception of Gwen Chambers' death last season. However, that loss only seriously impacted Kristina, who befriended with Kristina during chemo treatments. We have yet to see them deal with the death of an actual family member, which makes this particular tragedy seem all the more inevitable.

So who will meet their fatal demise? There are many Parenthood final season theories floating around out there, but I think we may have to say farewell to the Braverman patriarch, Zeek Braverman. And here’s why…

He Has a Heart Condition

We’ve known for some time now that Zeek’s heart isn’t in the best condition, and lord knows his junk food craze probably didn’t help matters while Camille was away in Europe. But the issue hasn’t really come up in a serious capacity so far since the pills he was prescribed seem to be working. But was this done intentionally? Perhaps the writers want us to all but forget about Zeek’s heart condition just so they can spring a crisis on us in the future. (I have major trust issues, if you can’t tell.)

His Character Development Is Complete

Any else notice how much Zeek seemed to grow as a person throughout the course of Season 5? He built a car from scratch with Victor, which he eventually gave to Drew; he went on a father-son road trip with Crosby; he started putting Camille first in their marriage, and even agreed to sell the house just to make her happy. See where I’m going with this? One could argue that Season 5 served as Zeek’s road to absolution, in a way. He’s developed and grown and learned from his past mistakes. Maybe through all this, the writers are trying to convey to us that even if Zeek’s life is ending, we can take comfort in knowing that it was lived to the fullest.

It Could Reunite Joel and Julia

Admit it, you want these two back together again just as much as I do. And as sad as Zeek’s death would be, it could serve as a motivator for this couple to find their way back to each other. Like it or not, death tends to have a way of bringing people closer, and Julia will certainly be in need of a shoulder to cry on. Come on, Joel — this is your shot to become the man you once were.

It Will Allow the Next Generation to Take Over

Zeek has been the head of the Braverman household ever since the series made its debut. Losing him would force someone else to take over as the main patriarch of the family — a role that, let’s face it, Adam was pretty much born to fill. It’s something that happens to every family… a sense of passing the torch to the next generation. It’s the circle of life and a symbol of hope in even the darkest of times, which is pretty much what Parenthood has always been about.

More like this
This Tiny Clue In 'Wednesday' Foreshadowed That Season Finale Twist
By Grace Wehniainen
These 'Law & Order: SVU' Throwback Pics Show 23 Years Of Shipping History
By Grace Wehniainen
At 14, Pauline Chalamet Fell In Love & Danced ‘The Nutcracker’
By Grace Wehniainen
In Pop Culture, Female Journalists Are Finally The Main Character
By Jenny Singer
Get Even More From Bustle — Sign Up For The Newsletter