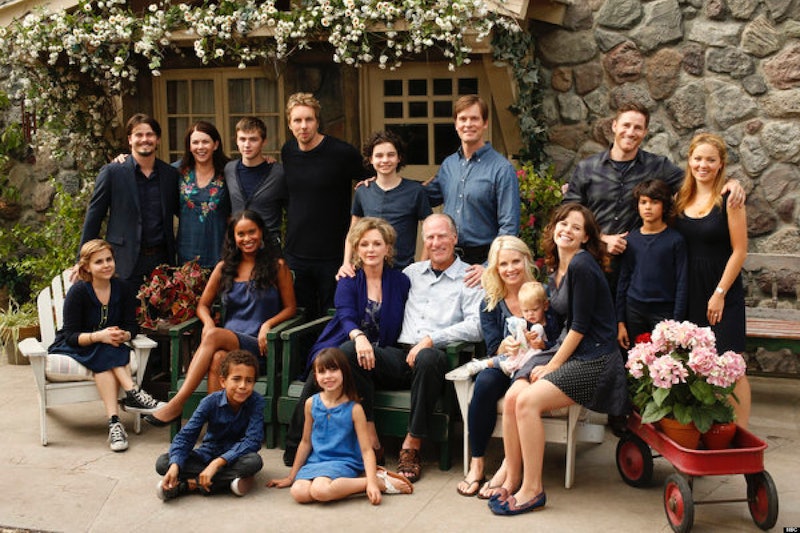 The last time Parenthood fans saw the Braverman clan, all was (mostly) well: Sarah and Hank got together, Haddie returned home, and Julia and Joel took a baby step towards reconciliation. Sure, there was that whole "Is-Amber-pregnant?" thing, but other than that, the Parenthood season five finale was as happily satisfying as they get — which is why, of course, Season 6 is bound to be downright depressing. According to showrunner Jason Katims, Parenthood 's new season will revolve around "a huge new challenge" that will affect all members of the family, because clearly, if the Bravermans are doing well, something's gotta go wrong.

While at the Television Critics Association Press Tour on Sunday, Katims revealed that this "challenge" will be introduced in the series' season six premiere and continue throughout the remaining 12 episodes.

“One of the things I wanted to do for the season was to find one larger story that influences everybody on the show,” he said.

He also added that the situation is one that "we didn't see before," and while it won't affect the number of other storylines going on during the season, it will be "something that tracks us throughout the year."

And then he shut up and moved on, because Parenthood's creator loves nothing more than making fans miserable. There's still over two months until the show's sixth (and final) season premieres, and so, in the meantime, we'll just have to make do with some educated guessing; five theories for what this "challenge" actually is:

I know, I know, Kristina having cancer doesn't fit the criteria of something fans have never seen before. Still, a recurrence would certainly be something that brings the family together, especially if it turn out to be as serious as her first bout with the disease.

2. Something Happens to Zeek And/Or Camille

Personally, my money's on this one, although I'd hate to see it actually come true. If one or both of those characters gets seriously hurt or dies, it'd obviously have a major effect on the family, and it'd also be a situation the Bravermans haven't yet faced. Of course, it'd also be seriously traumatic and heartbreaking, but this is Parenthood we're talking about — all dramas, no matter how severe, are fair game.

The fifth season finale saw Amber buying a pregnancy test, shortly after seeing Ryan for the last time. We don't yet know if she's actually having a baby, but if she is, it's assumed that it's Ryan's — unless it's not. What if Amber had a fling with Mr. Cyr during his return to Berkeley? Or Landry, when Crucifictorious spent some time at the Luncheonette? I'm not quite sure how this would affect every character on the show, but go with me here. A permanent Friday Night Lights crossover is too good to not consider.

4. A Child is Kidnapped

Now, this would be exciting (assuming the child is safely returned home by season's end, of course). What if Max or Jabbar got kidnapped, and the season revolved around the search for his/her return and the effects it had on the family? Yes, it'd be depressing, but as long as the kid was found to be okay, it could also be super interesting.

5. They're Forced to Leave Berkeley

Maybe there's a natural disaster. Maybe someone (meaning: Sydney) accidentally burns the house down. Maybe it's a Full House-type scenario, and some rich old man comes along and offers each family a few million dollars if they'd move out. Whatever the reason, it's possible that the Bravermans are forced to leave their homes in Berkeley and move elsewhere, an event that would undoubtedly affect everyone and cause major chaos.

Or, the "challenge" could be something totally unrelated to these five scenarios, and my guesses are laughably far from the truth. More likely than not, Katims is planning a curve ball that no Parenthood fan could predict, and we'll have to just deal with the blows as they come. One thing is certain, though; whatever this situation turns out to be, it's going to make you cry. Get your tissues ready and your DVRs set, because when Parenthood returns on Sept. 25, you're going to want to be prepared.