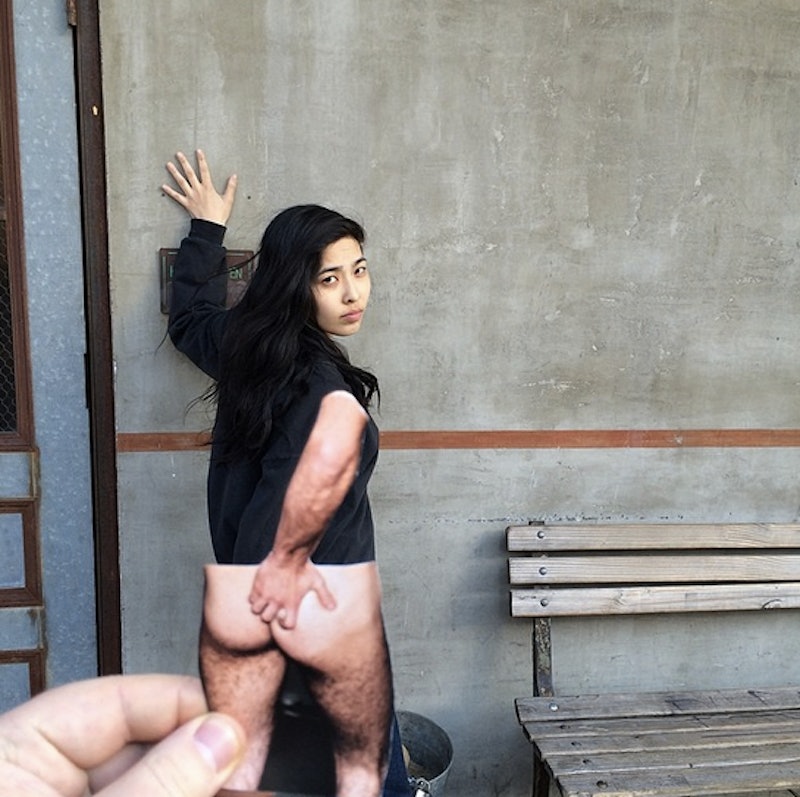 For many of us, Instagram is a way to make not-so-interesting things in our life seem pretty and appealing. For artist Kalen Hollomon, it's more than just that — it's become a crucial part of his medium and as a result, has boosted him to Internet fame. According to The Cut, Hollomon @kalen_hollomon uses Instagram to create erotica from everyday situations and fashion ads that are borderline NSFW.

If you take one glance at his Instagram page, you'll notice a trend — high fashion meets ordinary people and situations. There's a man at the mall unsuspectingly holding a Celine bag, Cara Delevingne's gorgeous blonde head on the body of a polo-shirt wearing man and Kim Kardashian being fondled by a man standing next to Kanye West.

It all started after the New York-based mixed media artist became frustrated with how he was unable to paint large-scale canvases in his tiny Brooklyn apartment. He began to cut up his girlfriend’s vintage copies of Vogue. This was the beginning of what would be his signature cut-out style. When he hit a wall at his kitchen table, looking for ways to incorporate his clippings, he thought, "I was shuffling through my backgrounds, couldn’t find exactly what I wanted, and then realized there were a lot more options outside."

Hollomon decided to take those magazine clippings and juxtapose them to people he would see walking on the streets and taking the subway, from police officers to homeless people. It fit perfectly with the square format of Instagram, which prompted him to use it as a way to showcase his art. Slowly, but surely, Hollomon attracted hundreds of followers — now he has over 65,000.

Not only did Hollomon gain a huge social media following, people in the fashion industry began reaching out to him for work and among those well-known clients was Vogue — what a full circle! But while he's found success through his gender-bending, somewhat erotic art, Hollomon admits he's a little embarrassed to stand around holding magazine clippings. "No matter how the photograph looks in the end, the act of standing around holding out a magazine clipping feels dumb," but he continued to tell The Cut that he doesn't mind that much anymore. "Now I sometimes get paid to do those kinds of photographs, and that feels very good.

Here are some of his most popular pieces: