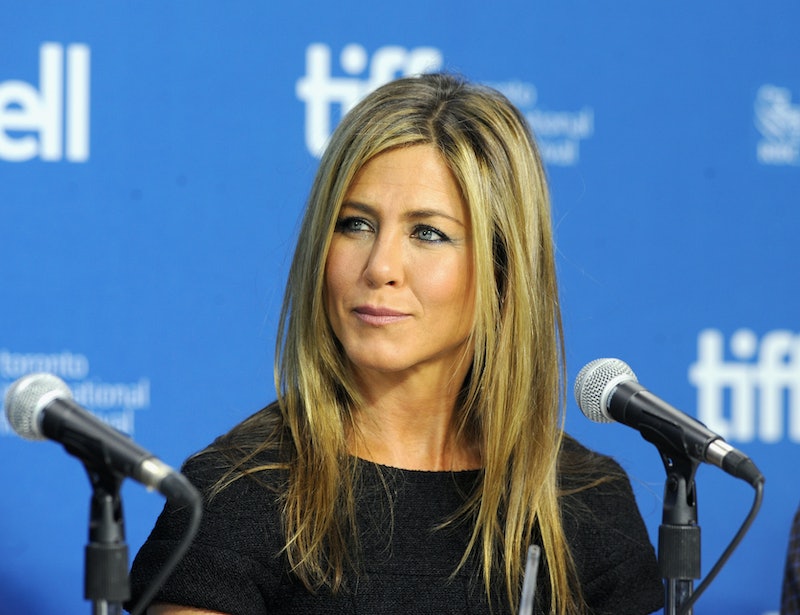 Jennifer Aniston’s been keeping busy hanging out with fiancé Justin Theroux, acting as an executive producer for two of her upcoming movies, reuniting with Friends , and launching her sophomore scent. But that's just all in a day's work for one of the most famous women alive, I suppose. Not only that, Aniston, has some new movie projects that will be released this year. We'll see the We're the Millers actress in three new roles, and they're leaving me pretty excited.

They also all really show her range. I mean, who knew that she could be such a sweetheart one minute, then a sex-obsessed, morally ambiguous villain the next? Or that she would play a sexy dentist and someone who needs to be rescued from a hostage situation? I couldn't have seen these roles coming, but I'm super intrigued by the films' trailers.

Plus I'm digging Aniston's cast mates. She got to work with Isla Fisher and Yasiin Bey (aka Mos Def) in Life of Crime, Anna Kendrick and Chris Messina in Cake, and she's reprising her role in Horrible Bosses 2. Of course, I'm on board.

Check out the trailers and summaries for some of her soon-to-be released films below.

Summary: Hawkes and Bey kidnap Aniston, a businessman's wife, in this funny novel-turned-movie. But the twist comes when we find out that Aniston's husband, Robbins, doesn't even want his wife back and prefers his sexy younger girlfriend, Fisher, instead. The hostage situation suits him just fine and saves him the hassle and alimony of a divorce.

Why Watch It: It's a pretty hilarious scenario, and Aniston looks like more than just a golden wife to some business tycoon. But, hands down, Fisher wins this trailer, especially with the snippets of her scenes with Bey, who will always be Mos Def in our hearts.

Summary: Sudeikis, Bateman, and Day reprise their roles as Kurt, Nick, and Dale in this sequel. They're still fed up with their jobs, so they decide to start their own business, and of course hijinks occur when one of their investors pushes them towards kidnapping... Which is what happens when trying to run your own business, I suppose. Aniston reprises her role as the overtly sexual dentist Julia Harris.

Why Watch It: Well, if you liked Horrible Bosses and wondered what shenanigans the trio of rookie criminals are up to. (Just a guess, they're most likely cringeworthy but hilarious.) Points also for Aniston and Bateman's awkward flirting at the end of the trailer, especially considering their previous roles opposite one another in the off-beat romcom The Switch.

Release Date: Is said to premiere at the Toronto International Film Festival on Sept. 8, but a wide release date is not yet available.

Summary: Aniston plays a woman named Claire who gets invested in another woman’s suicide, played by Kendrick. The woman, Nina, used to be in Claire’s chronic pain support group, and the deeper Claire investigates the tragedy as Nina's ghost continues to communicate with her, the closer Claire becomes to Nina’s husband and the more she digs into her own tragedy.

Why Watch It: While there is not a trailer yet released or a release date for that matter, the cast itself should get you pumped. It's a drama, so we'll see some favorites in a different light than we're used to (Messina, Kendrick, and Aniston especially). Plus, a ghostly Kendrick haunting Aniston? Of course I'm in.