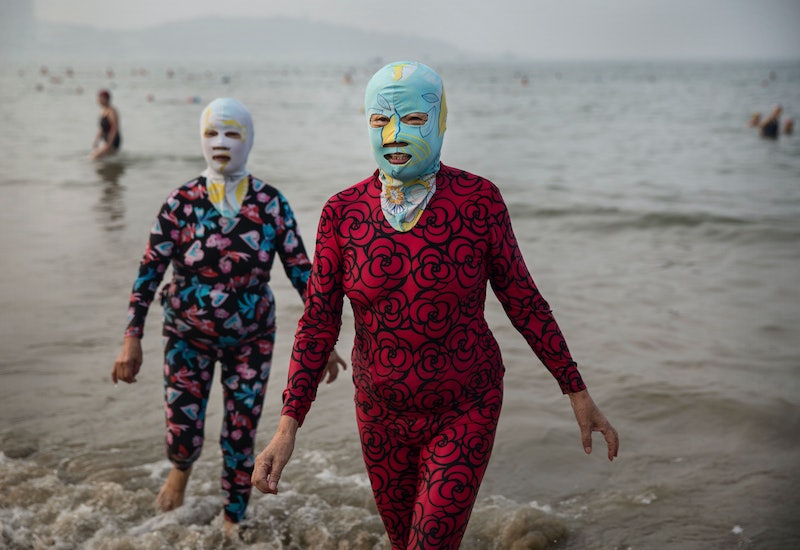 When it comes to skincare, I have this sort of vendetta against the sun. At the beach, I’m always the one hiding under an umbrella, draped in a long sleeved chiffon button-up while clenching a bottle of expensive 70+ SPF sunscreen (I just want nice skin forever, OK?). As obsessed as I am about it, I think women in China have taken this battle against the sun to a whole new level. Ladies and gentlemen, I give you: the face-kini, a mask designed to protect your face from sun damage. Yes, mask.

According to Business Insider, the mask was first designed nine years ago in China as a way for people to protect the skin on their faces from sun damage. Costing anywhere from $2 to $4, the masks are often handmade, usually from materials like old swimsuits or even underwear. The "face-kini" is especially popular on the beaches of the East China Sea in Quingdao, a northeastern city in China where it was invented.

The reason why people are resorting to literally wearing masks (as opposed to my expensive spray-on protectors + shear shirts + hiding in the shadows method) is because fair skin is highly sought after in China. According to NPR, protecting and preserving one’s skin from the sun is a sign of well being in the country, as opposed to tan skin which implicates you could be a “peasant” who works outside. As a result, China is famous for its effective skincare treatments, regimens, and cosmetics. The Huffington Post notes that many of the skin-releated trends from the east often make their way here, like using coconut as an ingredient in cosmetics.

Aside from sporting what looks like water-proof ski-mask to stay as pale as possible, there are other reasons to keep a face-kini handy. In fact, most of the people who wear them are actually older women looking to conceal their identities while swimming in the ocean. They’re also great if you want to protect your face from jellyfish stings and/or insect bites. Such a versatile accessory!

Personally, I will probably not be investing in a face-kini before my next trip to the beach. A wide brimmed hat, maybe. But not the face-kini (I’m not a big fan of bright colors). However, if I get invited to a Spiderman or Harmony Korine-themed party, then yes, I shall face-kini.