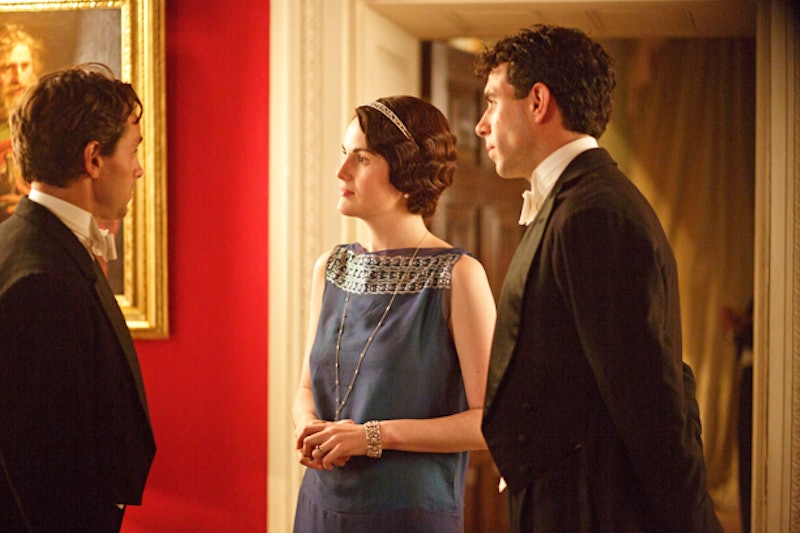 Poor Lady Mary… so many suitors, so little time. Downton Abbey Season 4 proved to be a rather rough year for the Crawley’s eldest sibling, who was trying desperately to adjust to life as a widow (RIP Matthew). But Downton Abbey's Season 5 U.S. premiere is looking much less dreary now that Mary’s currently the center of a very dapper love triangle. Lord Tony Gillingham and Charles Blake have been vying for her ladyship's heart for some time now and it seems neither has any intention of slowing down… or backing off.

But this single lady can only play the field for so long — otherwise she may wind up losing them both. And while many fans tend to be standing in Gillingham’s corner, I am proud to admit that I am now and will for always be a hardcore Team Blake supporter. (Try to keep those disapproving stares to a bare minimum, if you please.) Seriously though, everyone I talk to seems to think that Gillingham deserves the girl over Blake, which perplexes me still to this very day. Maybe it’s because they’ve known each other since childhood, so fans feel they have a special, sentimental bond together? Perhaps I just need new friends? Either way, Blake is totally the better fit for Mary and I can prove it.

It’s like that old playground adage… if a boy is being mean to you, that means he probably likes you. The same can be said for Mary’s situation. Upon first meeting, Mary and Blake would make jabs at each other all the time, nearly to the point where she acted as if she couldn’t stand him. It proves that he's able to stir up some deep-rooted passion inside of her that's been missing since Matthew's death. To me, that's the sign of a healthy relationship. And remember that whole muddy pig debacle? They ended up really bonding from that experience. Plus, to witness Mary stepping out of her comfort zone like that and getting her hands dirty (literally) was a thrilling sight to behold. More of this, please!

Just like ogres and onions, this guy has several layers to his personality, which makes him all the more intriguing. For starters, he lied about his identity. Yes, lying is wrong, but in this case it was somewhat understandable. He wanted to win Mary over with his charm, not his checkbook (or whatever they used in place of a checkbook back then). The point is — it was done with very innocent intentions, so we shouldn’t completely write him off because of it. Everyone wants to be chosen for who they are, not what they own. And I’m sure Mary, above all people, could come to respect that and perhaps even like him more because of it.

It also makes Blake so much more interesting and complex than his competitor. Gillingham is a gentleman who is always proper and does everything by the book. He’s also a great listener as well as a dear old family friend. Frankly, he looks incredible on paper. But he’s almost too good. And you know TV viewers have a thing for characters who are a little rough around the edges.

Mary Has Already Turned Down Gillingham Once

Okay, yes, technically she's also seemingly rejected Blake’s advances as well and appears pretty neutral in her feelings toward both parties… or at least that’s what she’s trying to convey on the outside. However, her reasoning behind these rejections vary a bit. When Gillingham proposed, she told him no, explaining that she wasn’t quite ready yet so soon after Matthew's death. That’s a perfectly reasonable excuse. But a sufficient amount of time has gone by since then, and yet she still seems hesitant to take the next step with him. Is it because she still isn’t ready or could it be that she now has her heart set on another?

When approached about a relationship with Blake, Mary’s main concern was that it wouldn’t work because of their difference in status, unaware at the time of his true inheritance. It wasn’t so much about the money as it was about thinking he’d have completely different priorities than her, like preserving Downton’s estate, for instance. Did anyone else notice that with Blake she didn’t claim to not be ready? Could that be a hint that he’s the one she prefers? If Gillingham was truly the one for her, I doubt she’d be quite so hesitant, especially after everything that happened with Matthew. Life is too short not to trust your instincts.

So please give Blake a chance to win you over next season. You may even find yourselves switching teams...