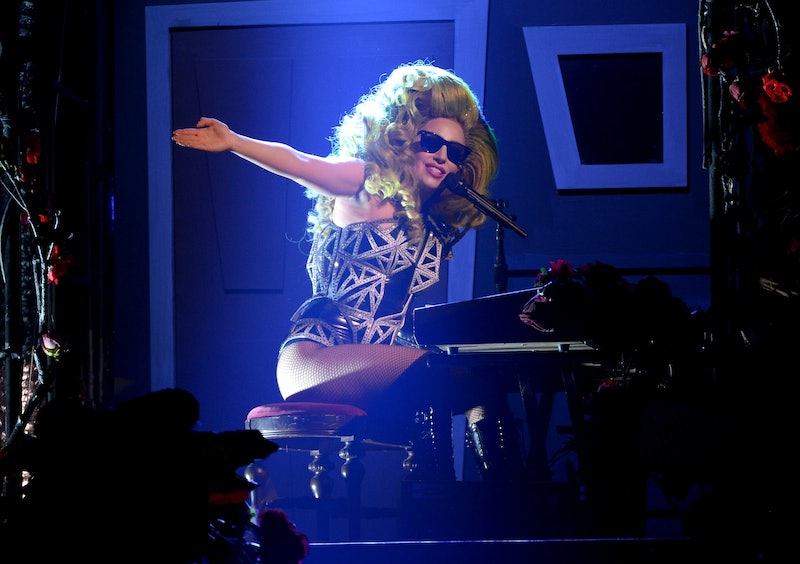 Lady Gaga's fashion sense is outrageous. Gaga has left her mark on the fashion world as we know it. But most of us can't really replicate any of her crazy couture ensembles or onstage costumes — no meat dresses IRL, not even for carnivorous Little Monsters, thank you very much. Although I must admit that her recent take on a classic Chanel tweed suit on her latest Harper's Bazaar cover was the most normal she's looked in a while.

But that doesn't meant you can't dress up and go as hard as possible when it comes to glamming out if you decide to go see Gaga live. She is currently on her artRAVE: The ARTPOP Ball Tour in the U.S. and is heading overseas shortly to continue her global trek in support of her latest album.

International factions of Little Monsters can get gussied up when heading out to The Ball. While some enterprising Monsters of the Little sort often employ their arts and crafts skills to create outfits that are similar to that which Gaga wears on stage, that's not always an option or even a desire for some of her other fans.

If you just want to get dressed up, look amaze and stylish, and enjoy Gaga's performance antics, here are four outfits that are totally suited for taking in a Gaga gig or going Gaga...at least in concert, that is. I am thinking Ma Monster herself, who looked amaze when she channeled Bianca Jagger earlier this summer, will throw two very enthusiastic thumbs up at these choices.

Gaga has been seen wearing heavy metal t-shirts and has espoused her love for classic rock artists, which is a byproduct of living with her rock lovin' dad Joe Germanotta. While Gaga is a pop artist, who says you can't wear a decidedly rock 'n' roll ensemble when dancing and singing along to her hits? A graphic sweatshirt (check out that print!) along with cut-off jean shorts, chunky combat boots, and a heavy smoky eye are a Joan Jett update and are elements we've seen Gaga herself play with in different variations. Pus, you'll be super comfy while you rock out.

Little Monsters are aware of a crazy catchy Gaga song called "Glitter and Grease" from her early days. This outfit is heavy on the gothy glitz and glam. You can totally be "that girl," who wears a Gaga tee to a Gaga show, if you pair it with the right pieces, like a leather mini, well-heeled boots, and wristlet. Tone down all the black with light pink lip gloss and be careful walking in those towering booties. I want a pair NOW!

It's technically still a summer tour, since it's August, and even though the tour is packing up and heading to the other side of the world, a summery outfit is totally workable. A cute, girly, and skinny strap crimson dress and gladiator sandals get a boost from stacked bangles, a high-end tote, and ruby red lips. A lot of Gaga fans are regular girls with more simple styles and this look is emblematic of that fact.

Gaga fans who like to make statements on their night out at a concert could go with this furry teal top. Since the top if so bold, other elements can be simple but sexy, like a pair of leather leggings, black platforms, and a fedora, nodding to Gaga's love for Michael Jackson. Finish with black lacquered nails and a classic Chanel bag and you'll be one of the most fashionable real girls in the room... after the Lady on stage, of course.