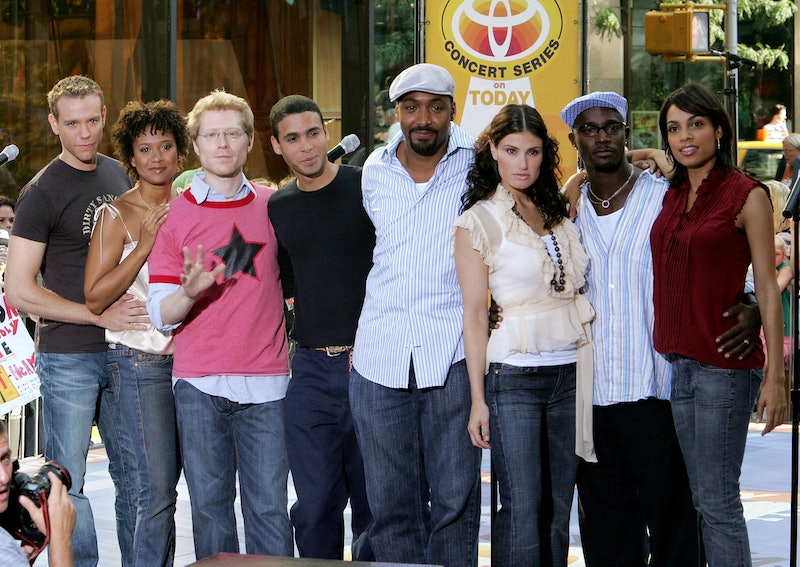 Viva la vie boheme! You know exactly what I'm talking about, Rent-heads. It's the celebratory anthem about living a bohemian lifestyle from the seminal Broadway musical by the late Jonathan Larson, duh. Rent made its way into the hearts and minds of almost everyone... except for a few haters. But we self-affirmed Rent-heads need to band together over our shared adoration for the musical, even if it's been six years since the show bid adieu to Broadway. Back when the show first debuted in 1996, it was really something else, and fans who listened to the soundtrack on repeat understand exactly why.

Haters often jump in with their snide remarks about how Rent is lame, or how if "you really were broke and couldn't pay your rent, you wouldn't be singing about it." Or how mathematically, if Roger and Mark hadn't paid their rent in a whole year... well, that would be a lot of money that they owed. I hate it when naysayers say it's so overplayed, so overdone, so whiny, so emo. Stop.

Fans — who still have the soundtrack on their iPods and occasionally bust out "Out Tonight" at karaoke — know why it's a special musical, and even if they forgot a few of the lyrics to "La Vie Boheme," they will jump to defend the show if you insult it.

You don't say these things to a Rent fan. You just don't.

Ew. Musical theater. I Hate The Sound of Music

Yeah, Rent is a musical, but if you hate The Sound of Music, it's far from it. Open your mind and be aware of the fact that musicals have changed over time!

I don't understand why you had to see it multiple times

The cast changed! The actors' interpretations were different! I wanted to rekindle the romance! I won $20 lotto tickets! The list of reasons is endless, but no one's criticizing you for re-watching The Big Lebowski.

I hated the movie

Not every Rent fan loved the 2005 movie, either. As cool as it was to see the original cast save for Joanne and Mimi, most of the actors were about 10 years too old to play the parts that they played nine years before. Also, that moment where Roger is riding through the canyons with his hair blowing in the wind was moderately unsettling. But still, it was kind of neat to see it in movie theaters.

Why do you feel the need to listen to it at Christmas time?

Hey! It's beginning to snow!

Because the whole show takes place over the course of a year, from one Christmas eve to the next. The whole first act takes place on Christmas Eve. Got it? It's "A Christmas Story" for Rent-heads.

Eastern standard time, from here on in I shoot without a script — why, it's the first sung line of the show! Duh.

No, she was baller as Maureen. Listen to her voice on "Take Me or Leave Me" on the Rent soundtrack and re-think that thought.

Okay, maybe the end ties things up a bit too neatly, and "Your Eyes" isn't half as good as "One Song Glory," but whatevs. Roger + Mimi forever (or, uh, until they die).

Oh, it's that show about people with AIDS

It's about WAY more than people with AIDS. It's about a community of artists, dealing with various emotional tribulations. And no, not every single character has AIDS, by the way.

My high school/college did that — It sucked

That's like saying, "I heard someone sing 'Let It Go' at karaoke, and oh dear lord, that was painful. That song must suck." Is your high school composed of Broadway stars? If so, then I'm sorry. If not, then please kindly revoke that statement.

The music is so loud

You have obviously never heard "Sante Fe" before.

It's not about anything

GAH. Don't even make me recite the whole soundtrack and tell you the whole plot. We'll be here for two hours and thirty minutes with one intermission.

I'm sorry, but nobody would wear those leggings

DON'T. I totally owned a pair of aqua leggings.

The show was written in the early '90s. Learn yourself something and know that the East Village was not the college party 'hood with vegan snacks that it is today.

It's a metaphor! And to quote the song, "it's a dark, dizzy, merry-go-round. As she keeps you dangling... your heart she's mangling..." It's about the seductress Maureen and how she grips onto people's hearts, leaving them cold.

Idina Menzel much? Taye Diggs much? That's how they met (before they very upsettingly split)! You would NOT be watching all of Taye Diggs' vines if it weren't for this Broadway performance. (OK, maybe you would be, but still.)

No, I will not moo with you

Fine. I'll find somebody else, or I'll moo alone.

That "no day but today" stuff is BS

Actually, it's gorgeous. It's YOLO, without the eye roll or the consequences that The Lonely Island illustrates so perfectly in their song with that title. It's about seizing today and this moment because you may not have another. Is that BS? I don't think so — and I don't think millions of Rent-heads think so, either.