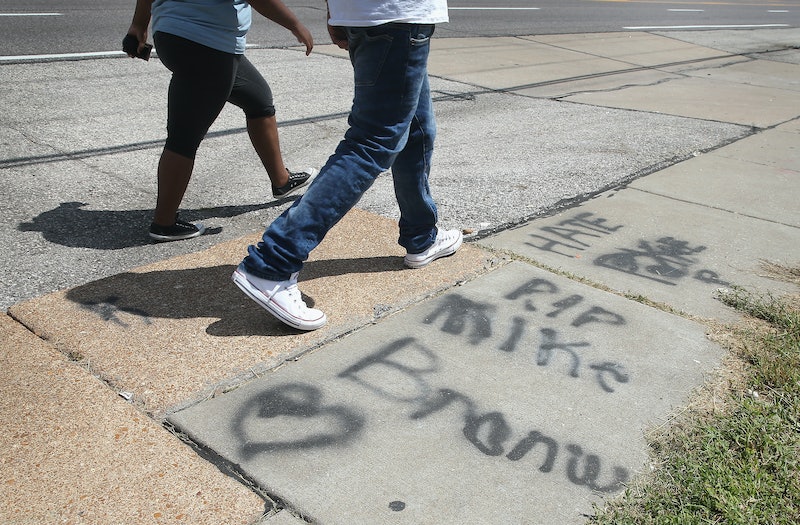 Hundreds of activists picketed a police department in Ferguson, Missouri, on Sunday, protesting the shooting death of teenager Michael Brown. Brown was just 18 years old when he was shot by a police officer Saturday afternoon. The unnamed police officer, who is reportedly a six-year veteran of the department, fired multiple shots at Brown at an apartment complex in Ferguson, a predominantly black suburb of St. Louis. The shooting of an unarmed teenager is obviously never a good thing, but in a time of nationally escalating suspicions of police brutality against black people, it's especially disturbing. Officials have said there will be a federal investigation, and the NAACP has sought the help of the FBI.

Brown and a friend, Dorin Johnson, were reportedly walking to where Brown's grandmother lived when they were confronted by police. It's here where the stories diverge. According to St. Louis County Police Chief Jon Belmar, the two shoved and assaulted a police officer as he attempted to exit his car. Belmar said in a press conference that after a struggle for the officer's weapon, which fired once and hurt no one, the teens began to run from the scene. The officer fired the fatal shots as the friends fled.

But Johnson remembers something slightly different. He claims he and Brown were walking in the middle of the street and the officer instructed them to move to the sidewalk. After a verbal confrontation, the officer reportedly fired a shot, at which point Johnson and Brown began to flee – an account corroborated by eyewitnesses. Johnson says he hid behind a car but that the bullets stopped Brown. Though Brown reportedly held his hands up to show he was unarmed, the officer fired more shots anyway, killing him.

The shooting, regardless of how it happened, caused immediate outrage among neighbors in the apartment complex, who emerged to shout insults at the officer. More shots were reportedly fired (though no one has confirmed who fired them), though no one else was hurt. More than 60 officers from 15 departments eventually reported to the scene, and the officer who shot Brown has been put on administrative leave. The Ferguson police department has turned the case over to the better-appointed St. Louis County department, which has promised a thorough investigation.

The protests continued into Sunday, both at the Ferguson police department and online. Two major hashtags (and many more less popular ones) have sprung up around Brown's death: #Ferguson and #MikeBrown.

John Gaskin,representing the St. Louis NAACP, expressed what many of the protesters are feeling after the incident, saying, "With the recent events of a young man killed by the police in New York City and with Trayvon Martin and with all the other African-American young men that have been killed by police officers … this is a dire concern to the NAACP, especially our local organization."