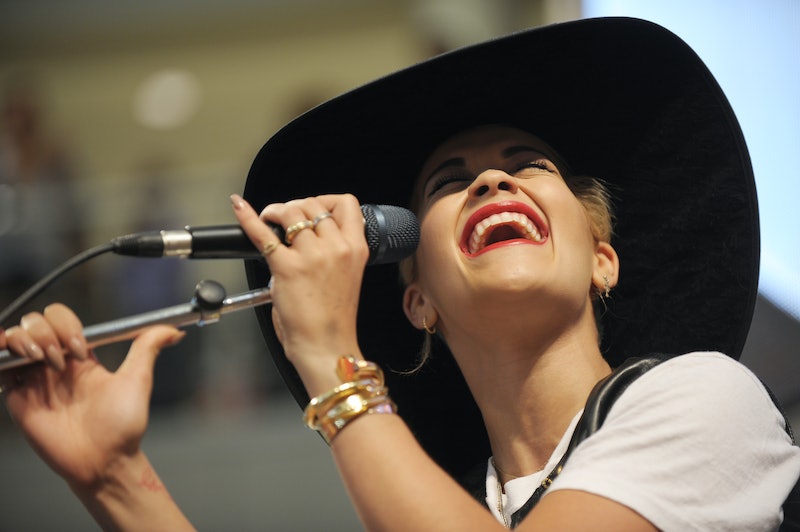 The Teen Choice Awards was the highlight of the weekend, especially since it was hosted by Tyler Posey and Sarah Hyland. Between Hyland and Posey's amazing stage chemistry, the awesome performances, and the throwback reminder that Posey appeared with Jennifer Lopez in Maid in Manhattan, the ceremony was a rousing success. However, there was one performer that was supposed to be there but had to cancel. Rita Ora was replaced by Becky G, which isn't that much of a disappointment considering that Becky G is a talented performer and it gave us a great shot of Ariana Grande dancing along, but the reasons for the switch are what's disappointing. Apparently, Calvin Harris refused to let Ora perform because the song she had scheduled was one he had written — and he decided to make this call two days before the Teen Choice Awards.

Listen, I would love to be more understanding about Harris' feelings here. After all, the song does belong to him even if it was Ora who made it a hit and it might be awkward for him to see all the videos of her performing it at the Teen Choice Awards when "I Will Never Let You Down", as the song is ironically called, is a love song. It might have been over two months since he broke the news on his Twitter that Harris and Ora had split and his tweets made it seem like it was an amicable one, but clearly that isn't or is no longer the case.

However, the sheer disrespect involved in revoking his permission to allow Ora to perform the song at the Teen Choice Awards two days before she's slated to make her appearance is completely messed up. Ora wasn't informed two days before Sunday that she'd be performing. She's known for a while, considering how much rehearsal, stage blocking, costumes, fittings, lighting negotiation, and camera angles go into performing onstage. The only way Ora could have gotten this far to still be preparing to perform as late as Friday is if she already had Harris' permission before he suddenly changed his mind.

According to a Daily Mail insider, "She had spent a considerable amount of time and energy preparing for her now cancelled performance of the song and is devastated to let her fans down in this way... This cruel move by bitter Calvin has impacted not only the Teen Choice Award production but the teenage fans expecting to see her perform. He's let the teens down."

Whatever issue Harris and Ora are having with each other, it wasn't worth letting down the audience, some of which might have been there in the hopes of seeing Ora perform. Becky G did an amazing job filling in last minute, but the fact is that she shouldn't have had to because Ora should have gotten to perform like she was originally scheduled to. Even if Harris did have what he considers to be a good reason for this, it still seems like a petty stunt to pull, one that affects not only Ora but also the audience.