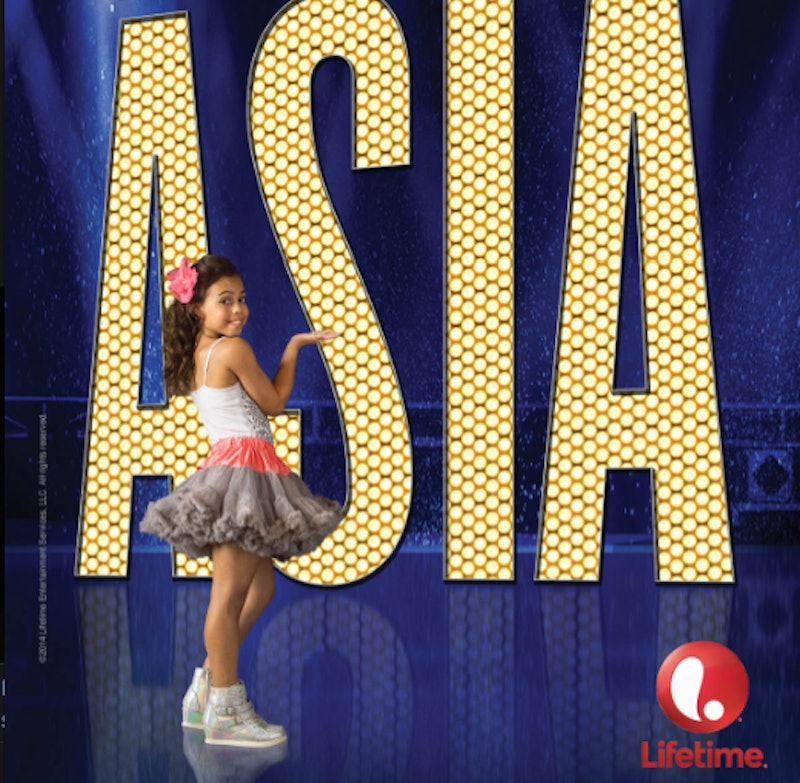 By the time I had seen one episode of Dance Mom's third season, I already knew that Asia Monet Ray was going to be a star. When I was 9 years old, I was sitting in a third grade classroom not really understanding math. Asia, however, spent her ninth birthday walking the red carpet of this year's Teen Choice Awards just a few weeks after the premiere of her Lifetime reality series Raising Asia . In an interview with Bustle, Asia shared her advice on how to follow your dreams, which is a big theme in her debut album Asia Monet. Yes, this 9-year-old also has an album.

"I would tell girls who want to do what I do to follow their dreams," Asia says. "Don't listen to what people are telling you to do; do what you love to do. '1 Wish 4 U' off the album is about that. Be nice and be humble."

Asia told me singing had always been a passion of hers, even amidst a very jam-packed schedule. "Ever since I was little I loved singing, I loved music," she says. "I was so busy in the beginning and had no time for it, but when I got less busy I had more time. I started to sing like a bird." And what beautiful music this little bird makes. The album includes other anthems like "Move Something" and "Getup 2 Get Down," which features a rap flow from Asia that not even Nicki Minaj could rival, and the inspirational "1 Wish 4 U," which is based on Asia's current career climb to the top.

This pint-size pop princess has aspirations of becoming the next Beyoncé, and boy are those big shoes to fill, but it seems Asia is well on her way. She is in the midst of production on her first feature length film, Sista Code, trouncing her competitors at dance competitions, and recording Asia Monet.

Asia is incredibly humble and self-aware for a 9-year-old star. She thanks all of the people in her life, most of whom you'll meet on Raising Asia, for helping her get this far. "My mom has helped so much, motivated me, and never held me back. My Dad knows how hard it is to be the best you can be," she says. She also thanks her choreographers, like Anthony Burrell, who is featured on the Lifetime docuseries, and manager Billy Hufsey, a former teen idol who has appeared on NBC's Fame and Days of Our Lives, among other things.

As much as Asia loves the glitz and the glamour of Hollywood life, she does say that it isn't always easy. According to Asia, her father, a big proponent of family quality time, gets upset about how busy her schedule is and the fact that they can't always spend time together. That's also what she cites as one of the largest drawbacks of this lifestyle. Asia stays grounded by remembering that great sacrifices yield even greater rewards, and she is set up to win big.

One of those great rewards has been her Lifetime series. While definitely an adjustment from previously not being filmed, to her role on Dance Moms, to this, Asia is happy and enjoys her time on camera, "I'm so thankful and blessed to have the opportunity, now everybody can see my life," she says. "I'm so thankful and glad and I have so much confidence to do the things I do."

It was truly inspiring to speak to someone who is so young yet has such intense drive and passion. My five year plan is so scattered and vague that I couldn't explain it, but Asia's is so clear and concise, "I wanna do a ton of movies, tour, do a Staples Center performance, perform in Paris and New York... I guess if I go to Paris I have to learn to speak French."

It's rare to be able to watch the growth and process of becoming a star. If I could watch a reality show all about how Beyoncé became who she is today, you already know I'd be sitting down binging it on Netflix. In 20 years, people will be able to look back and say they saw what it took for Asia Monet Ray to get to where she is now.

Asia's series is a really interesting look into a side of stardom that most of us don't get to see. It shows all of the hard work, the practice, the determination, the ups, the downs, and the pay offs. And it shows just how well one hugely talented 9-year-old is handling all of that.

More like this
Andy Cohen Apologized To Larsa Pippen After A 'RHOM' Season 5 Reunion Dust-Up
By Brad Witter
'Bachelorette' Vet Clare Crawley Unveiled 2 Special Wedding Day Accessories
By Stephanie Topacio Long
'Bling Empire: New York' Star Nam Laks Is The “Blair Waldorf Of Thailand”
By Alyssa Lapid
Paris Hilton & Carter Reum’s Relationship Timeline Includes A Surprise Baby Boy
By Bustle Editors
Get Even More From Bustle — Sign Up For The Newsletter
From hair trends to relationship advice, our daily newsletter has everything you need to sound like a person who’s on TikTok, even if you aren’t.