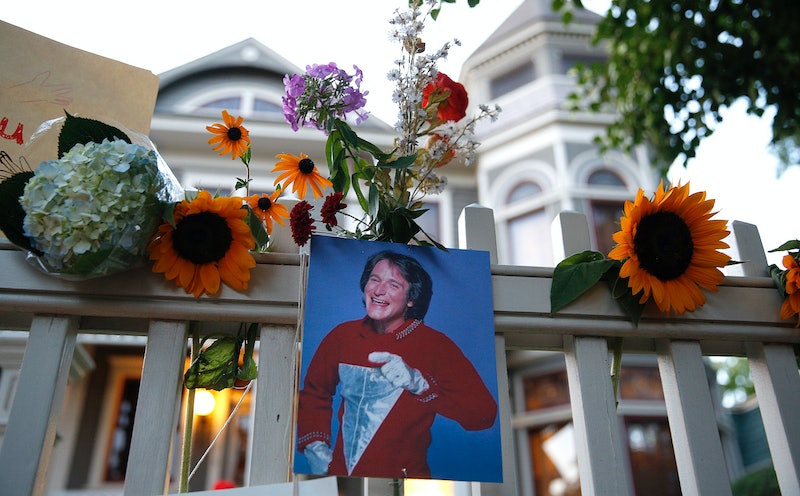 The world is mourning the loss of beloved performer Robin Williams, who died Monday from an apparent suicide. While many will remember Williams as an actor, a comedian, and a father, he was also a man who struggled with depression. His death is a reminder that mental illnesses, specifically depression and suicide, often affects those you would least suspect. People who are outgoing, charismatic, and larger than life.

Much like Robin Williams, I once tried to kill myself. Unlike him, my attempt wasn’t successful.

Over the years since, I've heard people comment that suicide is the selfish way out. But when I was contemplating suicide, I was actually riddled with guilt about my depression being such a drain on my family and friends.

When I was in eighth grade, my struggles with depression reached a boiling point, and I felt there was no reason to go on living. Though it was 21 years ago now, I remember the day I decided to end my life vividly. I remember how alone I felt and the complete feeling of desperation. I remember wanting to die.

I had struggled with depression for almost a year before I decided to attempt suicide. It was always an option I had considered, but one that I was scared to take. My mom's best friend had committed suicide earlier that year. Instead of feeling sad for her family and friends, the first thing I had thought was, She succeeded. She's the lucky one. I saw my mom suffer from her friend's death, but I had also seen her suffer as she watched her friend fall into the grips of depression.

Though I was young, I'd already tried therapy. It hadn't felt helpful. I was sad about nothing and everything, all at the same time. I believed therapy couldn't fix anything when there was nothing I could pinpoint as wrong in the first place. I had a loving family who did whatever they could to help me through. But it wasn't enough.

There was no real trigger that prompted me to decide that one Tuesday after school was the moment it would all end. Something just snapped in me. Suddenly, I was convinced there was no way out from the pain and misery of everyday life. It was as if I was outside of my body; like I was watching myself from the corner of a room. I felt as though I had no control over my actions. My brain was focused on death, and I saw it as my only option.

The only thing I thought about, other than ending my life, was the horror my brother would experience if he came home and found me.

So I slit my wrists and promptly called 9-1-1. I asked for an ambulance to come get me and remove my body before my brother got home from school. I left the door unlocked to make their entry and exit easy. They were there within minutes, which is undoubtedly what saved my life.

My suicide attempt forced me to get the psychiatric treatment I needed. I'm grateful to the 9-1-1 dispatch and I'm even more grateful to my brother. I'm sure he has no idea that he was responsible for, in many ways, saving my life, but he absolutely was.

Over the years since, I've heard people comment that suicide is the selfish way out. But when I was contemplating suicide, I was actually riddled with guilt about my depression being such a drain on my family and friends. I saw their struggle trying to understand and support me through my illness. I saw their eyes filled with tears, wondering how to get through to me. I knew my depression was hurting those around me just as much as it was killing me, and I thought suicide was the best way to end all of their suffering. Not just mine.

I suspect that’s how Williams felt, and that suspicion breaks my heart. To think he felt for one second the pain and desperation I felt brings me to tears. No one should feel that way. No one should have to die alone, overcome by emotion and hopelessness.

Editor's Note: If you are struggling with thoughts of suicide or self-harm, the National Suicide Prevention Lifeline is here to help. Call 1-800-273-8255. You're not alone.