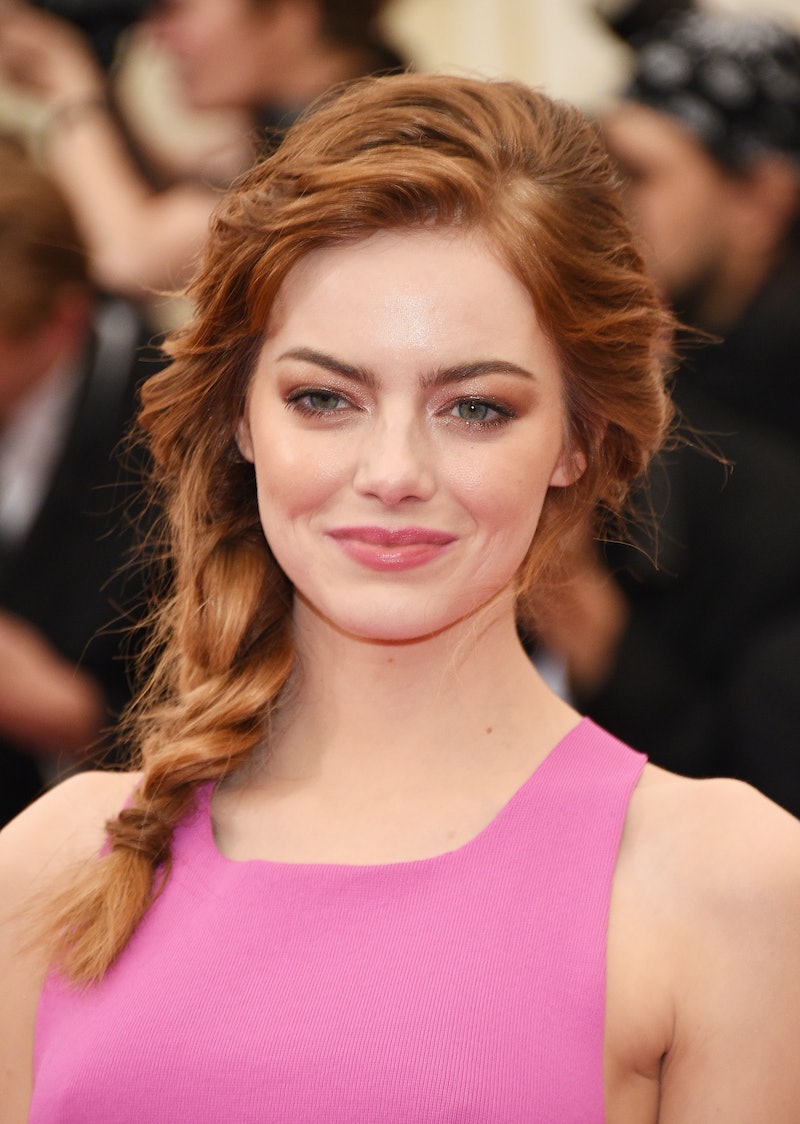 Am I the only person who didn't realize that Emma Stone has never been on Broadway until I heard this news? Just me? Okay, bye... Emma Stone is right up there with Jennifer Lawrence as being a national treasure, one of those unique young actresses who has mastered the art of comedic and dramatic acting without being typecast into one or the other, who brings talent and light to every role, and who refuses to talk about their personal life ever. In fact, Emma Stone and Andrew Garfield are dating but both of them continue to play coy about that fact and generally only refer to one another professionally when they're asked to talk about each other at all. Still, considering Andrew Garfield has already appeared on stage, that just makes it even more of a surprise that Emma Stone is in talks to make her Broadway debut. As in, appearing for the first time.

According to E! Online, this is actually the second time that Stone has been in negotiations to finally appear on stage after 2013 talks fell through due to scheduling conflicts. Now it appears that Stone is very close to finalizing a deal to take over in Cabaret when Michelle Williams makes her exit in November 2014. Stone would be playing Sally Bowles, the 19 year old performer around whom the play centers. Honestly, I'm still finding it hard to believe that Stone has never been on Broadway before. There are so many reasons why she'd be perfectly at home there.

Take this as your opportunity to watch Easy A again. Not only does Olive belt out "Pocketful of Sunshine" in the bathroom, but she also bursts out some lingerie and starts singing at the climax of the film. Stone clearly has the voice of an angel and it's been a longtime overdue for us to hear it on a Broadway stage.

The only person with smoother moves is probably Taylor Swift. Remember that time that Stone competed in Ellen DeGeneres' Dance Dare Challenge and showed off the fact that she is a better freestyle dancer than anyone in the world ever? Now imagine if she had real choreography to work with. The results would be epic.

3. She's known for her stage presence.

In 2011, Ryan Gosling melted all of our hearts (even more so than usual) during his interview with MTV by describing Stone like, "When [Emma] came in the room, it all made sense. Show me someone that wouldn’t give it all up for Emma Stone, and I’ll show you a liar." Even Stone's beau Andrew Garfield can't stop praising her enough: "It was like I woke up when she came in… It was like diving into whitewater rapids and having no desire to hang onto the side."

4. She can perform in front of an audience.

Stone has twice hosted Saturday Night Live, once in 2010 and once in 2011, and if she was ruffled by being able to see her audience as she performed instead of performing knowing they'd all see it later then she definitely didn't show it. Being in a room with all eyes on her is probably something Stone is just used to at this point and if it's ever made her uncomfortable then she definitely doesn't let it affect her work.

5. She already lives in New York.

So it would be really easy for her to get to work and back, obviously.

6. She's been considered before.

As E! Online pointed out, this is the second time that they're considering Stone for the Broadway stage and since her character has just been killed off in the Amazing Spider-Man franchise then Stone might have a lot more free time on her plate to do Broadway. It would be a fresh challenge for her and, really, it's exciting that they're still willing to reach out to her even after she had to decline once before.

7. She can basically do anything.

She's Emma Stone. She can do whatever she wants. All we need at this point is for Stone to become a serious contender for the next EGOT actress. It could definitely happen.

More like this
What Is Elvis Presley’s Net Worth? How The King Earned & Spent His Fortune
By Grace Wehniainen
Taylor Swift's “Carolina” Theme For 'Where The Crawdads Sing' Soundtrack Is Here
By Jake Viswanath
The Best Memes & Tweets About Lady Gaga Reportedly Joining 'The Joker' Sequel
By Grace Wehniainen
Just 1 More Award Would Make These Celebrities EGOT Winners
By Hugh McIntyre
Get Even More From Bustle — Sign Up For The Newsletter