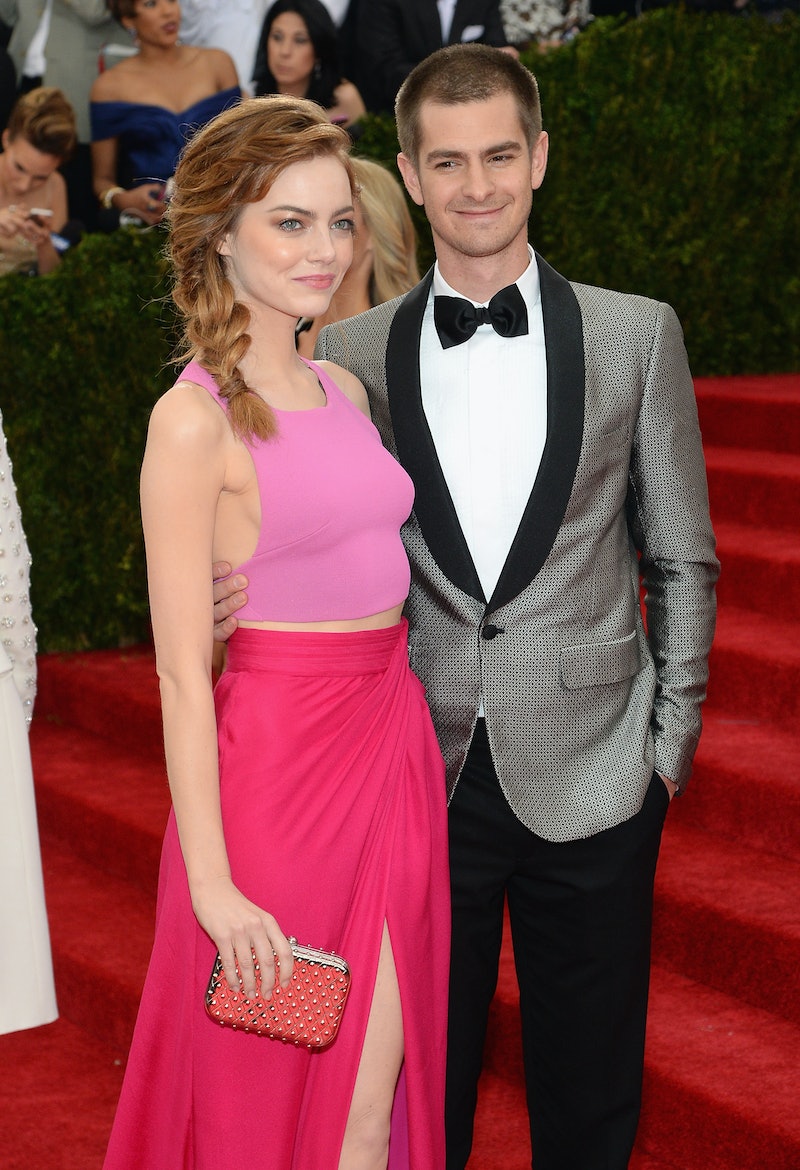 We already know they're one of Hollywood's cutest (and most charitable!) couples, but how did Emma Stone and Andrew Garfield meet? Well, when Garfield met Stone for the first time, his spidey senses were tingling. The picture-perfect pair was introduced during Stone's screen test for The Amazing Spider-Man in 2010, and they had instant chemistry. In a 2012 interview with MTV News, Andrew Garfield admitted he felt an immediate connection with Emma Stone at that audition.

We got on really well as people, in between [takes]. That was the fun stuff: In between, we'd just mess around, and I felt, 'Ah, this is different.' I wasn't really aware what was happening in the screen test. She keeps you on your toes, and that wakes you up. That was the beginning.

Garfield spoke of that same audition with Teen Vogue, when the pair did a joint interview and cover for the magazine. (Because, of course, they do adorable things like that!) He recalls the screen testing being very boring, until Stone walked through the door.

It was like I woke up when she came in... It was like diving into whitewater rapids and having no desire to hang onto the side. Throughout shooting, it was wild and exciting.

Despite their obvious connection, the pair didn't immediately start dating. That's because both were in long-term relationships. At the time, she was with Kieran Culkin (yes, Macaulay Culkin's brother) and he was dating Shannon Woodward. After those relationships ended, rumors surfaced that Garfield and Stone were together in June 2011, but it wasn't until November of that year that the two became open about their relationship.

Nowadays, the two are very much a couple, but still remain coy. They tend to speak of each other in professional terms, usually regarding acting not romance. When Stone was on the cover of Vogue in May, it was one of the first times she opened up about how much he means to her, saying,

I've learned a lot by being around him. And you know, he is an incredibly important person to me. It's been fun working with him just because of who he is as an actor and person.

Regardless of whether or not they gush about dating, they're pretty much the perfect pair, both on-screen and off! Especially when they do adorably awesome things like support their favorite causes together.

More like this
Yes, That's Christina From 'The Bachelor' In Taylor Swift's "Fifteen" Music Video
By Brad Witter
All The Clues About Aly & Zach’s Relationship Status After 'The Bachelor'
By Brad Witter
Mimi Webb’s IRL Situationship Inspired “Red Flags”
By Catharina Cheung
Paris Hilton & Carter Reum’s Relationship Timeline Includes A 2023 Grammys Date Night
By Bustle Editors
Get Even More From Bustle — Sign Up For The Newsletter
From hair trends to relationship advice, our daily newsletter has everything you need to sound like a person who’s on TikTok, even if you aren’t.