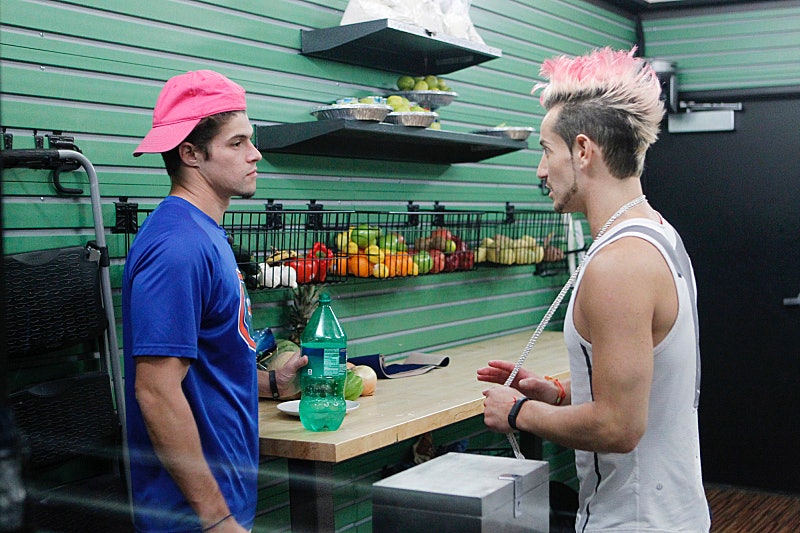 Despite all the fanfare and anticipation, Frankie's big Ariana Grande truth bomb was more of a sad fizzle (his housemates saw it as sad boasting that made him nothing more than an "escape goat"), but that doesn't mean there wasn't a total meltdown caused by Ariana's brother Frankie during Wednesday night's episode of Big Brother . Once his former BFF Zach found out Frankie's other news (he's playing for a charity in Africa, because he is a totally selfless social media mogul) he lost it. Like, totally melted down. Full dingus. Even by Zach standards. Last week's display looked like a level-headed reaction compared to this.

Zankie fell apart right before our very eyes as Zach called Frankie a liar, and his former cuddle buddy screamed back, "This is fucking Big Brother!" Zach accused Frankie of being a manipulative backstabber, while Frankie shot back that Zach wouldn't even be in the game if it weren't for him. "My best friend in the house betrayed me," Zach later said, with arms folded. The honeymoon phase is over, kids.

If Zankie's unofficial breakup tipped the scales to Zach's latest meltdown, it was Frankie claiming that he's playing for a charity that really sent him over the edge. With tears in his eyes, Zach wondered how he'd lose to a guy who was playing for a good cause.

But, dry your eyes, Zach fans, ya fruit loop dinguses... because he just won the Power of Veto! (That is, if he doesn't blow up his own game, in addition to emotionally self-imploding.) "If I get a chance, I'm gonna take him out," Zach warned, as he and Frankie played fake nice to pretend they're still friends. Now that is Big Brother.