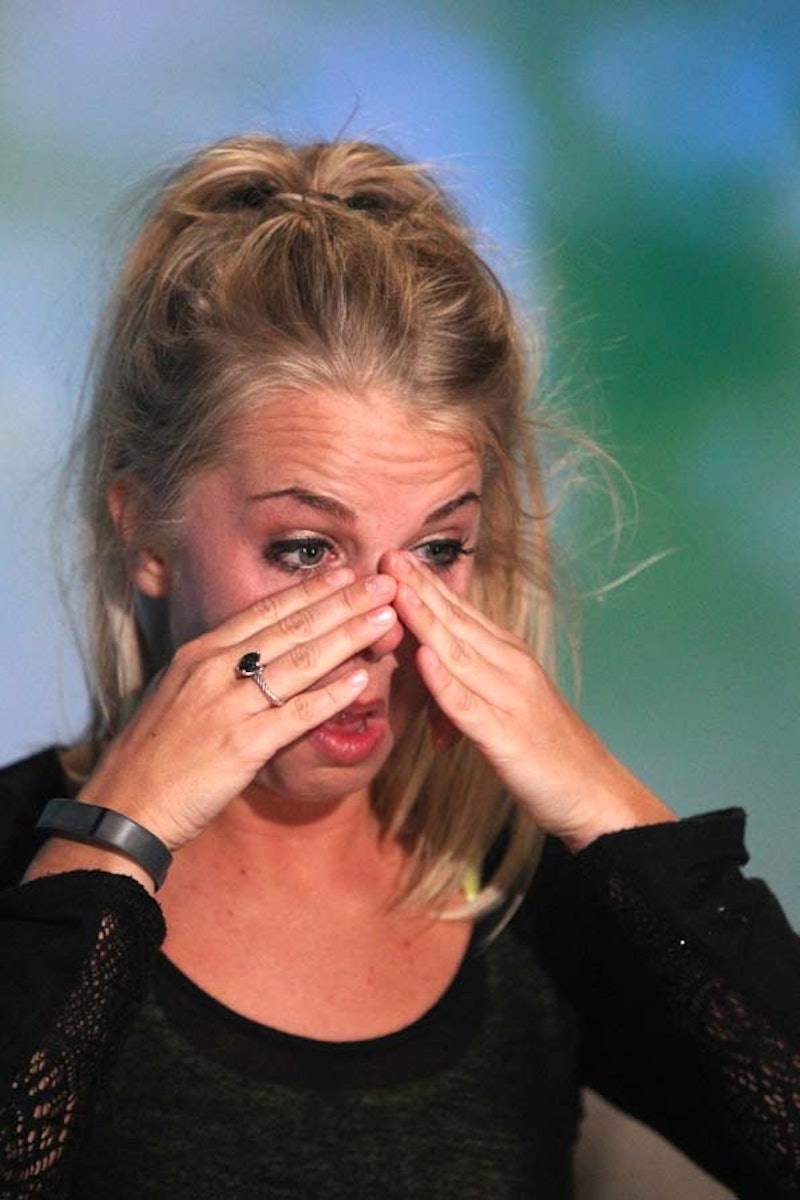 I truly believe that you are not out of the Big Brother game until the second that Julie Chen announces "You have been evicted from the Big Brother house." Every single thing that the houseguests thought they knew while inside the house, can be flipped upside down in a matter of minutes. Last Thursday, Nicole's entire Big Brother game was thrown for a loop when Zach wasn't evicted, and instead replaced by Jocasta ad Hayden during the double eviction episode. She was left completely alone in the game, especially when her Big Brother BFF Christine betrayed her and put her on the block.

So with Thursday's live show hovering over us, and Nicole on the block next to Donny, is there any chance that Nicole could save herself? Well, the show isn't over until Julie says so, so of course there is a chance that Nicole might not join her "boyfriend" Hayden in the jury house. Nicole went to work during the days before the live eviction to campaign for her safety, but Wednesday night, Derrick came to her and told her the votes just aren't there for her to stay. Maybe if Nicole tries one of these four tactics before the live episode, she'll still have a chance.

Zach is known for ruining his fellow houseguests' games by completely exposing every alliance he is in and subsequently the alliances his fellow houseguests are in. No doubt that if Nicole and Zach struck up a deal he would be happy to cause some drama and blow up people's games, possibly altering Nicole's fate (but maybe sealing his).

Make a deal with Derrick and Cody

"The Hitmen" are running this house, and if she can get them to change their votes, she can get anyone to change their votes. If Nicole were able to come up with a deal for the two guys, possibly using her as a vote (like Victoria) and vowing to throw future competitions (unlike her co-nominee Donny), there is a chance they might bite, since they see Donny as a threat.

Get to Caleb & Frankie

Caleb and Frankie might think they have power in the house, but at the moment, they are Derrick's puppets that he is controlling, big time. If Nicole can influence them into realizing that Derrick is only loyal to Cody, and has tried to get them evicted before, they might vote for her to stay and form a super-alliance. Caleb has already taken a liking to Nicole's friend Mariah, maybe that gave him a soft spot for Nicole.

As Donny's number one fan, I would hate to see this happen. But maybe if Nicole can convince Donny to quit before the votes are read, she would be able to stay on a technicality. Just trying to think outside of the box here.

If Nicole can't manage to save herself, that doesn't mean her time on Big Brother is over. Julie Chen keeps teasing us saying there is a chance that evicted houseguests could return, so I guess even being evicted doesn't mean your game is over this season.