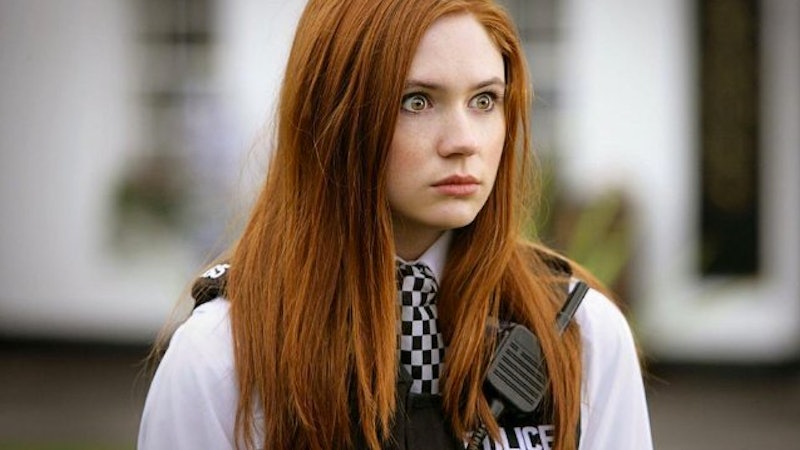 Can you believe we're less than a week away from new Doctor Who episodes? After eight, long months of hiatus, even the handful of days we have left seems hard to weather. Luckily, there are a few things to tide us over while we wait:

With the news that Jenna Louise-Coleman has quit Doctor Who, we'll only have until Christmas to enjoy her quirky, girly style — but hopefully someone just as fashionable will take her place as the Time Lord's companion. In a spirit of celebration and anticipation, I've created a fashion face-off, Doctor Who style. And who better to pit against one another than the two most recent companions, Clara Oswald and Amy Pond? They're kind of like apples and oranges, style-wise — Amy's known for her cool-girl sensibilities, what with her leather jackets and miniskirts, while Clara's known as more of an adorkable, Zooey Deschanel type. Thus, to make apple/orange comparison a little easier, I've divided them into subcategories (plaid, leather, dresses, etc) — so let's see who has the better style!

I'll never get tired of plaid jumpers. Ever.

Plaid was one of Amy's mainstays, but I think Clara might just have her beat: Clara 1, Amy 0

Holding a mace certainly helps her case, but...

...Amy's the unofficial queen of the leather jacket. I especially love this one from her out-of-left-field — not to mention short-lived — modeling career. Clara 1, Amy 1

Relaxed with an edge — the jacket looks awesome paired with those moto boots and that high-low-hemmed dress...

Short skirts (especially of the denim variety, like the one shown above) were kind of Amy's trademark, especially during season 5. That said, I have to give the edge to Clara for the twee factor! Clara 2, Amy 2

Clara's worn a lot of cute dresses in her day, but this one might just be my favorite. A kitschy sequin print and a black Peter Pan collar make it a strong contender, but...

Victorian Clara had just as great style as future Clara (or rather, Oswin) and present Clara.

Amy's period gear is a little less impressive (though to be fair, the Savoy did just get invaded by Zygons). Clara 3, Amy 3

I suppose that makes it a draw! I mean, off the record, I slightly prefer Clara's look (I'm a big proponent of cutesy retro-inspired dresses), but as this highly-scientific, multi-category study of the two ladies' style deems it a tie, I guess that means it's up to you to decide whose style you like best!

Are you a Clara or an Amy?