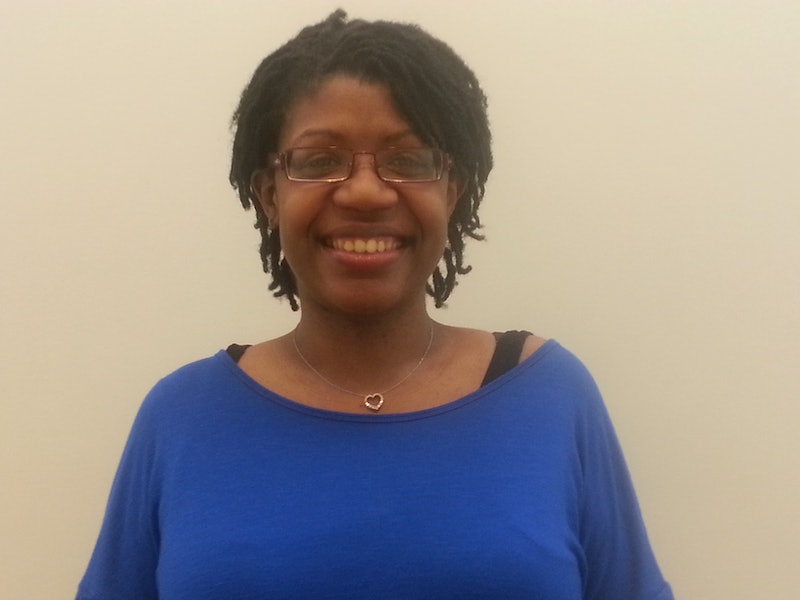 When a 25-character twitter hashtag catches on worldwide, calls out big-name writers, and continues to spread for days, its creator will have quite the busy schedule — as Mikki Kendall can attest. The hashtag #SolidarityIsForWhiteWomen has become a catch-all for women —especially women of color— airing concerns about the issues they see as excluded from the mainstream feminist movement. Kendall took a break from her own writing, tweeting, and teaching to tell us about her take on this conversation she's started.

What do you think is left to be said about this hashtag?

I saw someone tweet to me today that it feels like an abscess that has been run, that this was a poison that had been built up, and finally it’s out, and now we can heal. I think that is absolutely the case.

What’s your response to some of the negative feedback?

Look, I get we’re all supposed to say “it’s the patriarchy.” But the patriarchy doesn’t necessarily work the same way for women of color as it does for white women. Or white men. Or wealthy white men. These big terms are problematic, and yes, I get that I even used one [with #SolidarityIsForWhiteWomen] when I was short-handing for Twitter.

I get that it’s not really 'all' white women, which is why the hashtag doesn’t say 'all.' I thought the 'some' was implied, but apparently for some people it’s not. But the point is, you can’t say 'all black women have the same concerns...' or 'all Latina women have the same concerns' either. And if is this is your approach, constantly? Maybe you need to address that. It should be: Deal with the individual with a goal toward changing structural.

For some background here: Where did you grow up?

I’m coming from a very American context, and a very Midwestern context, no less. I grew up on the South Side of Chicago. That’s a different thing from someone who grew up in Chapel Hill or rural Mississippi, or New York even. We all have different concerns. I’m not expecting the movement to address each of them at the same time. But the ones that do connect? The ones like reproductive rights and access to education and safety? The faces of these things cannot just be tied together with racist tropes.

I’m that girl that is 'one of those people.' I lived in public housing, I was raised by my grandmother and other aunts for a long time because my mother wasn’t really present. I don’t know who my father is. I was a single mom for awhile.

What's a feminist issue for you?

The school that I went to [growing up] was on the school closure list this year, because at 98 percent poor and 98 or 99 percent black, they didn’t think we would fight for it. Fifty public schools in my city were just closed. There are going to be girls in that city who are now transferring schools, who are going to be crossing dangerous neighborhoods, for whom maybe education doesn’t seem like the key to anything because affording quality education is much more difficult for them. Because they’re coming from a school system where they’ve had their education disrupted repeatedly, and now we’re maybe not so good at school. These are all conversations that are feminist. We’re not necessarily having them that way.

Access is important. And a certain amount of cultural respect.

There has been such an overwhelming response to the hashtag. What themes have you noticed? Who's participating?

There’s a lot of talk about sexual violence, and violence period. Sexual violence was one of the ones to jump out at me — and the fact that the face of rape culture is basically a white woman, and the rapist is basically cast as a brown man. But the group of women with the highest incidence rate are actually Native American women, and overwhelmingly, they are actually assaulted by white men.

This is an indictment of rape culture, obviously, and it’s also an indictment not just of the individual rapist, but of this process, of this fetishization, of this abandonment of women. When you think about the Violence Against Women Act, it was actually controversial to get more power for women who are living on reservations, by giving tribal courts some say in what happens. The push back was “No, you’ll become this petty little fiefdom that can prosecute people for no good reason.”

Well, the statistics show, Native American women are in the most danger, and they need support. To do the work themselves.

And I’ve heard you say feminism hasn’t 'become' this way. Feminism has always had this history.

Yes, that’s it. You can go back to Frances Willard and see the same thing, We’re talking about the 1800s and Ida B. Wells and Susan B. Anthony. We’re talking about a long process. I mean, even where feminism came from — we don’t usually talk about the Seneca Falls Convention in the context of Seneca women, or the Iroquois women [who still lived there].

You're in good company. But how do you think this particular moment with its trending hashtags is different?

This is going to sound really dorky too, but Twitter has changed the game. You have feminists writers of color who have platforms of their own via social media, that maybe you didn’t see so much when it was just blogs. I saw my follower count jump this week — more than double actually.

In terms of gatekeeping, it’s much more difficult to keep people out. That’s not to say people aren’t still being marginalized.

Yesterday in the interview on HuffPost Live, he asked you “Can you have solidarity with white women?” I want to know, what does “solidarity” mean to you? What is that word?

I feel like there’s more than one kind of solidarity, and that word’s sort of a catch all anyway. But when we're talking about solidarity and feminism, it means being basically being able to respect the fact that your issues are not the only issues. And I’m not saying that white women in the West just need to take a moment to step aside and get off the mic. I’m saying that we need to take turns at the mic.

That “mic” is not just for the concerns of women above a certain income level, of women of a certain ability level, women of a certain educational level. You know, you look at what happened to Rachel Jeantel in the Trayvon Martin trial. That girl was so brave. She was trying to testify in what was her third language. We got sidetracked into talking about her appearance and whether she spoke English ‘well enough,’ or whatever, but the reality is that she was doing the work.

The people doing the work are not always going to be perfectly packaged, or maybe even necessarily frame things the same way that I would, or you would frame things.

So where do you go to find the feminists that you tend to listen to and read on a regular basis? Who are people out there doing work that you really admire?

We know @BlackAmazon does things. We know @brownfemipower does things. We know that you can go to, bizarrely enough, Clutch or sometimes Madame Noir , and find some great stuff. We know about RedLight voices. We know Jamilah Lemieux is running Ebony, and there is nothing more feminist than a black woman’s magazine that prioritizes a culture that we're told is garbage.

And you can sit down, you can google, you can find ChiefElk on Twitter, who’s talking about Native American issues. Or bad_dominicana, who talks about being from the Dominican Republic. They’re there. I talk to a lot of them all the time. But somehow when it comes to being paid for what they’re talking about? Then they’re invisible.