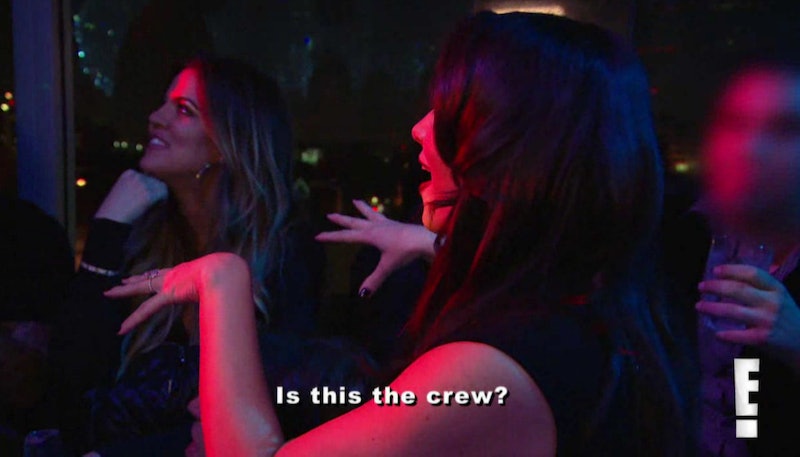 During Sunday night's episode of Keeping Up with the Kardashians , Kris Jenner makes it known that she is dead set on helping Kim Kardashian plan her and Kanye West's wedding. But! There's a road block: Kim won't have it. Kris won't have Kim's not having it. What does Kris do? Uh duh, she contacts Kim's wedding planner behind Kim's back. And uh duh, this infuriates Kim to the point of moving out of Kris's house and into Kourtney's house. And uh duh, this infuriates Kris to the point of calling Kourtney's landline ten million times.

Kourtney tells Kim that, in light of the middle daughter's argument with the matriarch about wedding plans and showers and favors, Kris said she doesn’t think she should attend the nuptials. [Clutches chest.] Kris wouldn't DARE! ...Would she?

HAHAHA, yeah right. Like that was ever a real threat. As upset as she is that Kim will not allow her to be involved in the planning of the big day, Kris would not miss that wedding for the world. They make up. Everything's coming up Kardashian!

My head would’ve exploded, reassembled itself, and exploded again. And then, a strong wind would’ve scooped up the pieces and dropped them into a bottomless well.

My head would’ve been a goner.

Enough about my skull and brains. Let's talk about the crown jewel of the episode: Kim at the klub. Here are the three best lines from Kim and Jonathan Cheban's stakeout/club appearance:

HONORABLE MENTION: Before she falls asleep in the passenger seat, Kim announces that it's "literally 12:15" and tells Jonathan about the busy morning she has ahead of her.

She never says anything about Bed Bath & Beyond, but she doesn't have to. Her eyes say she can't wait to pick out a new food processor. And I totally get that.