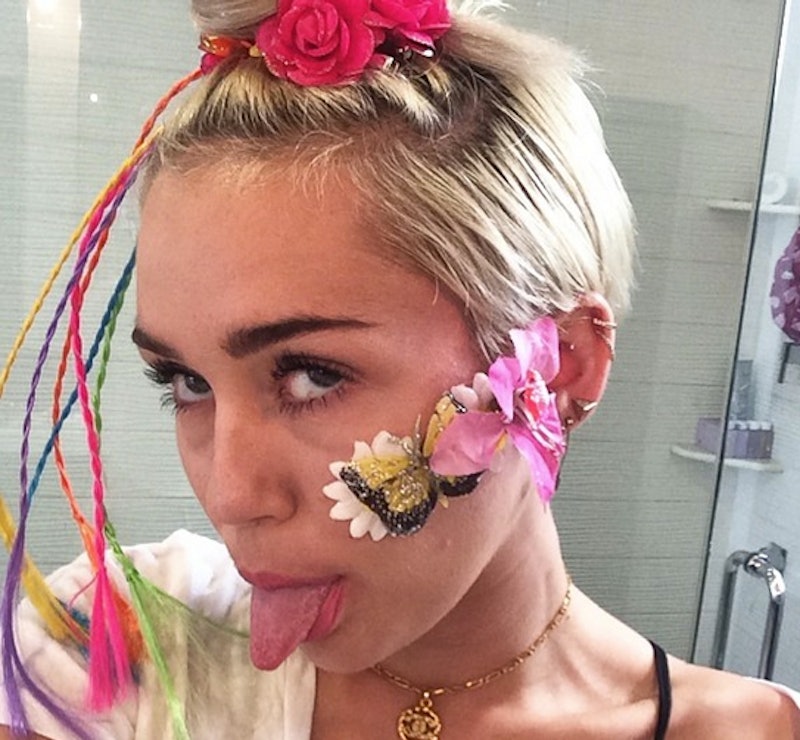 Miley Cyrus, tongue brandisher and pop star — or pop stars if we choose to believe that Hannah Montana wasn’t just a fictionalized TV character — has brought crafting back. Yes, there has been a black hole in the craft project world, because while we have the hands to make things, we simply lack the inspiration to do anything about it. Martha Stewart might be the reigning craft queen, but the craft world is after a new guiding light. Many have tried, like Taylor Swift who has made some headway with her handmade Mason jar snow globes and that Drake lyric needlepoint she gave Ed Sheeran. There’s also Blake Lively and Ryan Reynolds who like DIY-ing gifts for each other from time to time. And then there are Miley Cyrus' crafts which are really a step above everyone else's. Cyrus came into the craft environment like a wrecking ball, introducing a flavor of avant garde meets Lisa Frank meets raver meets Miley Cyrus' brain.

I admit that Cyrus’ rainbow crafts might make it seem like she let her inner child take the reigns of a glue gun, and they might look a little mad with the piles of silk flowers, the tiny velvet teddy bears, and the rainbow beads. But seriously, whoever gave Cyrus a gift card to Michaels should be patted on the back, because not only is she busy bedazzling, beading, and brightening our days with her Instagram posts of her crafts, but she’s inspiring her millions of fans, aka Smilers, to make their own. Some might say that an extremely decked out monogrammed ‘M’ might not be the most useful item on a desk, but it’s at least cheery. Here are just a few things Cyrus has pimped out, ranked by usefulness.

This is the latest in the Miley Cyrus collection of everyday objects covered in brightly covered bric-a-brac. If you were wondering whether it was a pile of friendship bracelets or a five-foot-bong, you're not far off the mark because Cyrus covered a five-foot-bong in friendship bracelets. This is more sentimental than useful, so she gets one bear for thinking of her friends as she takes hits.

Where would you need an entire face mask covered in tiny toy bears, other than a Miley Cyrus concert or an adorable crime heist? One bear for each scenario.

Sometimes a hat, your bangs, or even foundation can't hide a large zit. It's awful, and as much as you try, sometimes your efforts just bring even more attention to the Mount Vesuvius on your cheek. Cyrus solves this by making her "ugly pimple pwetty" with a Springtime themed bandaid that draws attention to the flora and fauna, and makes us forget the oozing pimple underneath.

This is Cyrus' version of a hair tie trippin' on acid. Mad props to her for mastering the loom to weave the rubber bands together. I also appreciate her two different weaving techniques. It's helpful, because as any girl growing out a short pixie can attest, it's hard to keep all of the short strands held back without any coming loose. Cyrus solves it by covering the entire short bun of hair with a really long psychedelic hair tie. Ain't nothin' coming loose there.

What else can you do with that rundown TV set from your grandma's time besides spray paint it gold and make art only a Hello Kitty enthusiast would love? It could sit in the corner and gather dust because no one can watch Netflix on it, or it could be a show stopper, conversation piece in your living room. This is the most useful transformation because she took something relatively out of date and will make people actually pay attention to it.

Can you imagine Cyrus' apartment? I bet it looks like a life-size version of Candy Land in there. I can only aspire to achieve such vibrance with my everyday objects. I know my coffee maker could use some beads, maybe even a few feathers and a rubber ducky too.