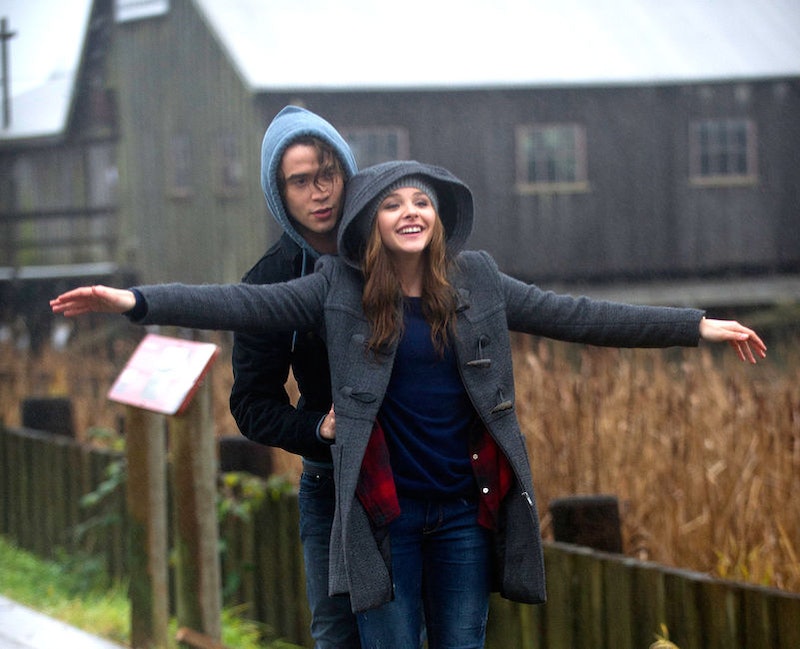 At first glance, it's nearly impossible not to compare If I Stay to The Fault in Our Stars. Just like the John Green book, If I Stay is a popular, beloved YA novel about a heartbreaking subject matter and led by a nuanced, likable female protagonist. Both books are part of the recent, fast-growing "realistic YA" trend, preferring real, relatable topics like sickness and school to sci-fi and fantasy. Both books, too, have become movies — The Fault in Our Stars an acclaimed June blockbuster, and If I Stay a Chloe Moretz-starring drama set for release August 22.

And that's where the similarities end. The Fault in Our Stars, at its center, is a love story between two teenagers, with cancer and adolescence as background. If I Stay has that, too, but it's far from the primary focus. Instead, the book and, most likely, the movie, focuses on the choice of its young narrator to live or die. Its other aspects —Mia's relationship with her boyfriend, her love of music, her fears about the future — are secondary, as they should be; the book is all about her, and her decision. Past the surface level, the two books are nothing alike, with totally different tones, storylines, and themes.

Yet they're still constantly compared; much of the promotion for If I Stay has called it "the next Fault in Our Stars ," with studios banking on moviegoers running to the theaters for anything featuring a sad plotline and a teen girl narrator. And while comparing the two works may be understandable on a financial end, doing so is a disservice to both books, as well as their movies.

People may not read or see If I Stay on its own merits, when they should be viewing it as a work that's moving and important for reasons entirely different than The Fault in Our Stars. Many might unfairly group the two together as "emotional YA," casting them aside as manipulative tear-jerkers when, in reality, their similarly sad storylines are just one small aspect of totally different works. Some people who didn't care for TFIOS might not even consider If I Stay at all, thinking that the two are alike in all the worst ways when that's as far from the truth as can be.

And they really are nothing alike. The Fault in Our Stars is a story about a girl with cancer who falls for a boy with cancer. They fall in love, travel to Europe, deal with the effects of their diseases and experience some typical adolescent milestones. John Green's novel is a funny, smart work that's heartbreaking at times, hilarious at others, filled with quirky, likable characters and plenty of pop culture references.

If I Stay, meanwhile, is depressing. It is always depressing, even when it's sweet and romantic and funny. At its start, its teenage protagonist loses her parents and possibly her brother to a car accident, one that leaves her trapped in a coma, caught between life and death. And from there, it just gets worse, sadness-wise, as Mia decides whether or not she can handle life without the people she loves most. It's a beautiful book, poignant and powerful, but it is far darker than most "realistic YA," including The Fault in Our Stars.

But the way some people see it, books that are about teens and make people cry are all the same, no matter how different they actually may be. It's not fair to the books, or the genre; adult literary fiction is rarely, if ever, grouped together by things as minor as the age of a narrator or the amount of tears a novel elicits from its reader. If it stays similar to the book, chances are that the movie of If I Stay will be nothing like any other film, YA or not, that came out this year; to say so otherwise is mistaken at best, harmful at worst.

So if you see If I Stay this weekend, enjoy it for what it (probably) is: a sweet, sad, eloquently-told story about a young girl's life-altering decision. Pay no attention to what it's not: The Fault in Our Stars, or any other sad movie starring a couple of people not out of their teens.