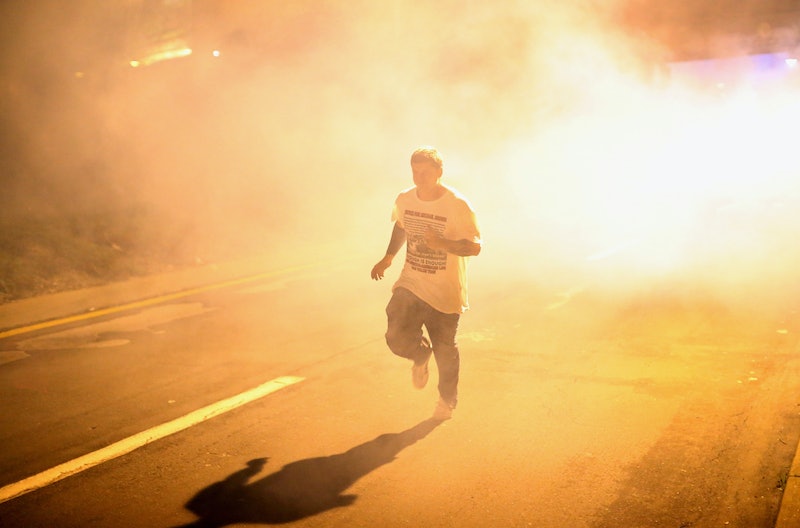 As clashes between protesters and riot police continued throughout the weekend in Ferguson, Missouri, Amnesty International sent human rights workers to the St. Louis suburb to help quell some of the escalating violence. It's an unprecedented move for the international group, which has never taken action of this kind in the United States, BuzzFeed reported Monday.

The team of 13 Amnesty International members was sent to Ferguson on Thursday, which marked a day of calm for the town embroiled in controversy over the fatal shooting of 18-year-old Michael Brown. According to BuzzFeed, the team consists of researchers, trainers and observers — a "cross-functional" team that Amnesty senior campaigner Jasmine Heiss said has never before been used in the United States.

However, the first few days in Ferguson have been tough for the Amnesty workers, who are looking into the allegations of excessive police force, gathering witness testimony and training residents on how to hold peaceful protests.

Steven W. Hawkins, executive director of Amnesty International USA, said in a statement last week that the Amnesty team will remain in Ferguson "until we have a clear picture of what is taking place on the ground." On why the human rights group was drawn to the soaring protests and miscarriages of justice in Ferguson, Hawkins said:

Law enforcement, from the FBI to state and local police, are obligated to respect and uphold the human rights of our communities. The U.S. cannot continue to allow those obligated and duty-bound to protect to become those who their community fears most.

Since arriving in Ferguson, Amnesty International USA has criticized the midnight curfew imposed by Gov. Jay Nixon, calling it a tactic meant for "quelling dissent and silencing protestors." Hawkins added in a statement that the residents of Ferguson "have the right to protest peacefully the lack of accountability for Michael Brown's shooting."

On Monday, after monitoring the unfolding violence and ensuing police retaliation, Amnesty International USA released these three advisories for fostering peace, calm and justice in the St. Louis suburb:

"This is a moment for people around the country – and around the world — to join the Ferguson community in raising concerns about race and policing, and about the impact of militarization on our fundamental right to peacefully assemble," Hawkins added.