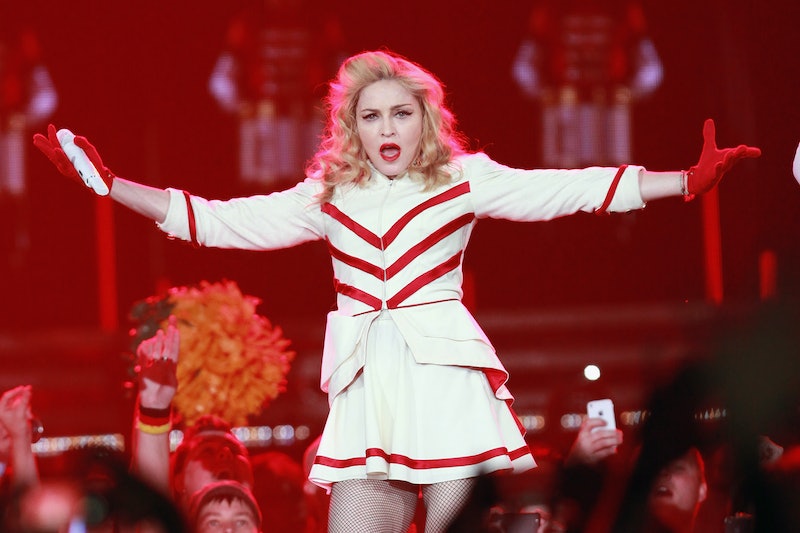 When two fashion luminaries get together, I'm always kind of surprised that the world doesn't explode. But life goes on, despite the fact that Madonna and Kate Moss partied together over the weekend for Madge's 56th birthday party, triggering emotional tsunamis across the globe from everybody who didn't realize the two were friends. What did they wear? (Not much.) What did they eat? (Champagne.) Who did they hang out with? (DSquared2. Riccardo Tisci. Madonna's too-cool-for-regular-person-school kids.)

The party was themed around the Roaring '20s, which makes me wonder if Madonna is actually a reincarnation of Gatsby himself. It makes sense, doesn't it? It took place in Cannes, the West Egg of Europe. Everyone was wearing diamonds. There was champagne, a photo booth, and Madonna's ageless face. In short: There was everything.

I'm devastated to report that my handwritten invitation was lost in the mail, so I didn't make it out to Cannes last weekend, but given the fact that I hang out with Madge and Kate every other weekend, I feel uniquely situated to reconstruct their conversation. We know it took place in a haze of cigarette smoke and tangled diamond necklaces, but other than that, it's largely a mystery. I imagine it went something like this.

Madonna (languidly): "Kate. So nice of you to stop by."

Madonna: "Can I get you anything? A smoke? More champagne?"

Kate: "Actually, riddle me this: I heard your party was '20s-themed, so I wore my '20s-themed wedding dress. I assume that won't be a problem?"

Madonna: "That's such a relief, because I wore my BIRTHDAY suit!"

Kate: "Thanks, but I don't need this many. They're crowding the frame."

Madonna: "Honey, you have to push your way to the front of the photo. Like this.:

Kate: "Sorry, I must be going deaf. I thought I heard you telling me how to pose."

Kate: "TELL ME YOU'RE NOT TELLING ME HOW TO POSE."

Madonna: "We can work it out! Just like I do in nearly every performance! See, look, here I am — "

Kate: "Fine, but I'm changing back into my wedding dress."

Madonna: "Sure you are, honey. And it looks lovely."