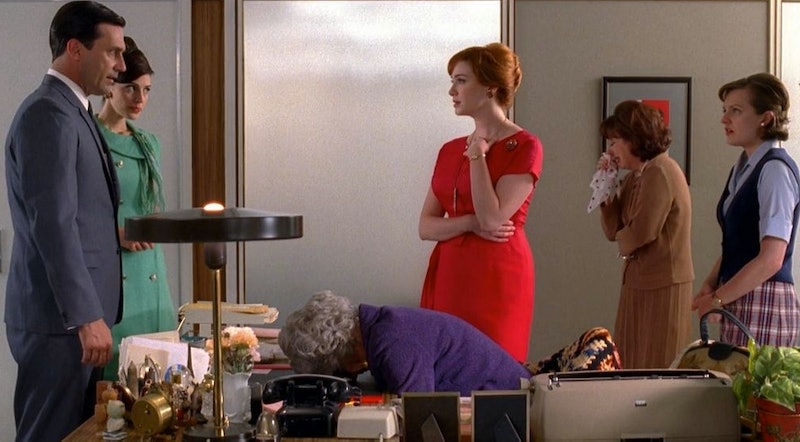 The end of the critically beloved, much-analyzed Mad Men is drawing ever-near. The second half of Season 7 will air this spring, forever declaring an ending on the story of Don Draper, Peggy Olson, and all their fellow messed-up people. So how will this ending be received? Will it be a Lost? A Sopranos? A Breaking Bad? Or will it draw out its own territory? Mad Men showrunner Matthew Weiner's got his own prediction to how his series finale will go down in public opinion. I believe the key word he used is "mixed."

The road has been paved for a mixed review, no matter what. I do what I’ve always done on the show and rely on the people around me. The actors, the writers, and my wife all liked it, so that’s all I can go on at this point. I hate to say this — obviously ending the entire series is significantly more pressure — but it’s been that way every year. I never knew if the show was coming back for most of the series, so we treated every episode 13 like it was the end. It’s very bittersweet and high-pressure.

He's right, of course: There's almost no way for Mad Men's finale to please everybody. For one thing, people watch TV shows for different reasons — some might have a certain ending for Peggy Olson in mind, for example, while others will be focused more on Don. And as for Don, he evolved quite a bit this past half season alone — the way things may shake out for him might be markedly different than the literal fall from grace (the one replicating that title sequence) many have predicted from the start.

Most importantly, though, Mad Men's never existed as a show interested in fan service, or fan catharsis. The series finale of Breaking Bad was cathartic in a lot of ways, but maybe don't expect Don Draper to get the same treatment as Walter White come finale time — they're very different people, and very different characters. Mad Men's always been a show capable of surprising me when I had no idea I was about to be surprised, and I expect the same from this finale half a season.

So what does the Mad Men finale have in store for us? Oh god, I have no idea. As long as they don't end up with Robin Scherbatzky I'm game.