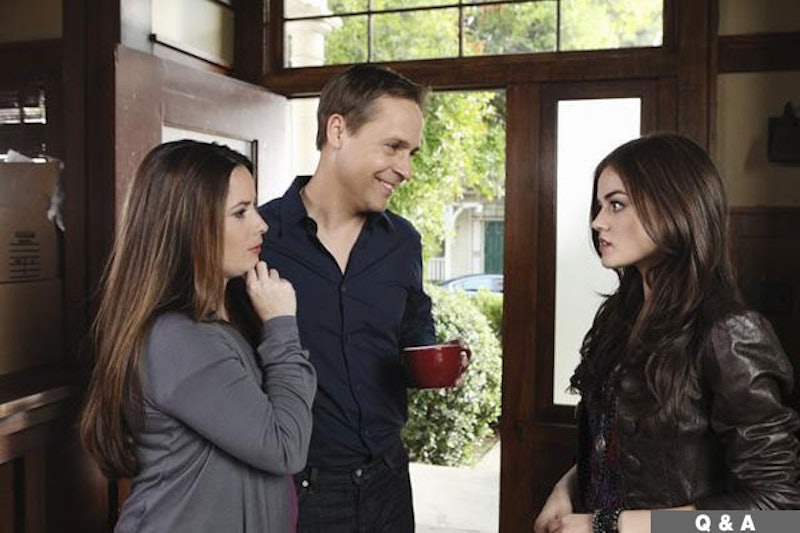 Backpacks, notebooks, folders, No. 2 pencils — these are all things that typical kids are expected to bring back to school with them. But for me, there was not one, but two extra accessories I grew accustomed to taking to school everyday: my parents. Yup, both of my parents were teachers at my school.

I know what you’re thinking — that must have sucked. And while that was definitely my way of thinking about it throughout those awkward, early teen years, I can honestly look back now and say that it wasn’t so bad after all. (I mean, what doesn’t kill us makes us stronger, right?)

My dad taught eighth and ninth grade math, while my mom taught typing and business classes. So from sixth grade on, I shared those hallowed halls with my folks. And like most things in life, the situation came with its fair share of upsides and downsides. If your parent was also a teacher at your school, I'm sure you know what I mean. So on behalf of teachers’ kids everywhere — and I’m sure there’s a lot of us out there — here are the things that only we can truly understand.

On the First Day of School, All of Your Teachers Already Knew Who You Were

“Oh, it’s so nice to finally meet you, Kelly. I’ve heard so much about you.” Awesome, now I’m going to spend the entire year wondering how many embarrassing childhood stories you know about me.

Which Prompted Them To Call On You More Often

Even Teachers You Didn't Have Knew Your Name

When I said I wanted to be popular, this is so not what I had in mind.

Of Course, There Was the Chance You'd Have Your Parent As An Actual Teacher

Which Meant Even Higher Expectations for Your Grades

A B might as well have been an F in your eyes.

And If One of Your Friends Got Yelled at in Class …

Somehow it ended up feeling like it was all your fault. Like you should be held responsible for your parent's actions. (You also most likely got bitched at immediately after class.)

And everyone noticed. Every. Single. Time.

After all, your parents were going to the same place you were.

. . . though That Meant You Had to Arrive at School an Hour Earlier Than Everyone Else

And leave an hour later at the end of the day. For you, staying after school wasn’t optional — it was mandatory (at least if you wanted a ride home).

Getting a Good Grade Left You Vulnerable to Classmate Skepticism . . .

“What, did your parents give you the answer key or something?” Yeah … if only that was how this situation worked. Also, thanks for your faith in my intellectual ability.

. . . but at least You Were Always Guaranteed Lunch Money

Forgot to ask for some money that morning? No problem. Your own personal ATM is just a stone's throw away.

You Assumed that All Parents Got Summers Off

What do you mean your parents are at work? It’s summer vacation!

What do you mean I have to go into work? It’s summer vacation!

You Were Always the First to Know About Snow Days...

. . . But Playing Hooky Was always Out of the Question

Even if that meant going a mile out of your way to your next class. It was well worth it.

Seeing Teachers Outside of the Classroom Seemed Perfectly Normal to You . . .

After all, you’d see your parents outside of school all the time. What’s the big deal?

. . . Your Classmates, However, Treated It Like a Celebrity Sighting

Yes, my mom and dad go to the grocery store … because they are also human. (Teachers — they’re just like us!)

“You got a C? Isn’t math what your dad teaches?” Yes, he does. And this right here is proof as to why I am not teaching it.

Some Older Students Refused to Say Your Name

To many you were always “Mr. and Mrs. (insert last name here) son/daughter.”

You Knew All of the Good Faculty Gossip . . .

Which was surprisingly more involved than a daytime soap opera.

. . . but Getting Detention Meant Double the Punishment

Forget about trying to find a way to sugarcoat what you did wrong. Your folks are getting their intel right from the source, which means some serous grounding was usually in order.

You Got to Know Your Grades Before Anyone Else . . .

Which could be seen as either a good or bad thing, depending on how well you did. But hey, it took all the extra stress of waiting out of the way at least.

. . . but Asking For Their Help With Homework Would Always Result in a Major Fight

“That’s not how I learned it in class! YOU ARE EXPLAINING IT WRONG!” Good times, good times.

You Knew What the Inside of the Faculty Room Looked Like...

It was a magical place full of vending machines, soda, and free donuts.

. . . but You Felt As Though Your Dating Life Was Constantly on Display

Mostly because it was. Your parents had eyes everywhere in that building.

You Were Your Parents' Own Personal Decorating Committee

This meant that you were forced to visit the school during summer break to help get their classrooms ready for the next year. Let's just say, it was the opposite of a good time.

And of course, Everyone Assumed You Wanted to Be a Teacher When You Grew Up

It’s not genetic, people. Let me explore my options!