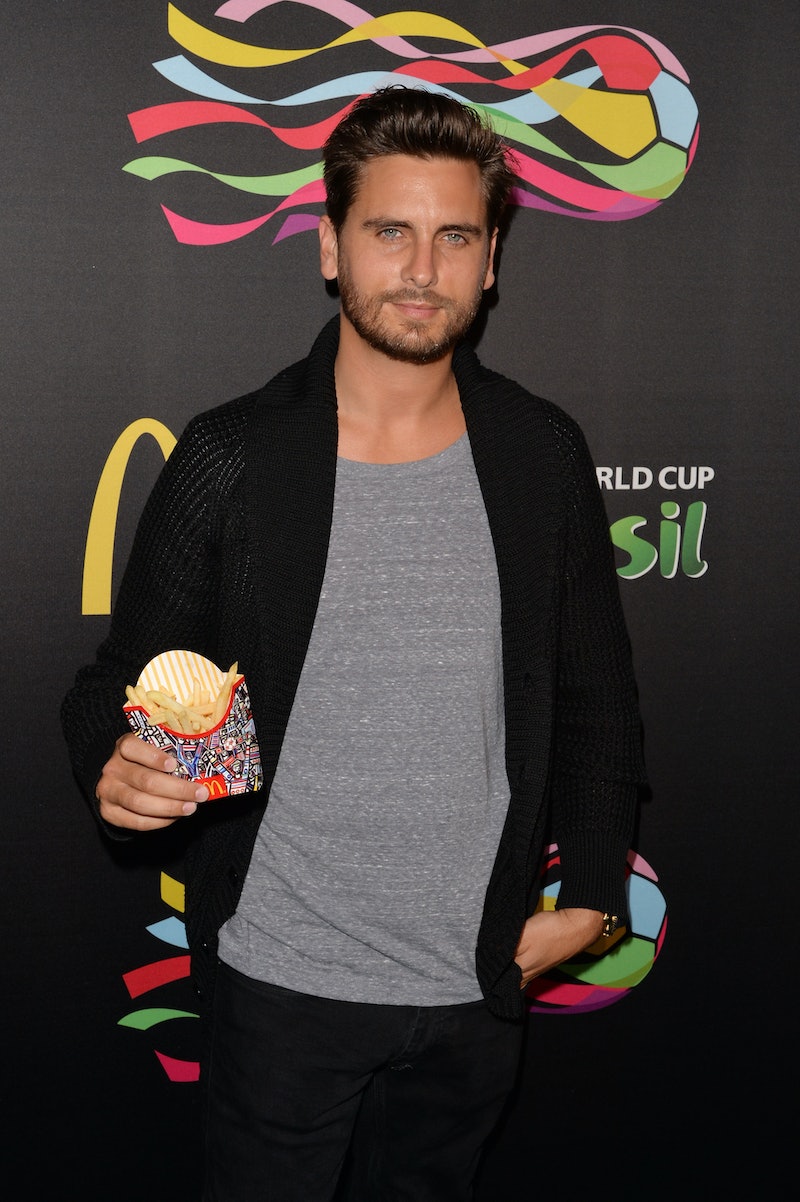 Oh, Scott Disick. He used to be the villain on Keeping Up With the Kardashians, but now he's changed his ways. Actually, when you think about it, he's the only one out of all the lady Kardashians' boyfriends/husbands who's actually stuck around. (Sorry, Bruce! I was rooting for you.) But that doesn't mean things have been easy, especially recently. He’s been dealing with the devastating loss of both of his parents. Then back in June, Scott Disick was hospitalized for alcohol poisoning. The good news is that things are looking up now. Reportedly, Scott is better than ever, telling People.com that he's feeling good and explaining, "I've had ups and downs. Every time you can better yourself it's a good thing, and a positive thing."

Apparently he stuck to bottled water (good choice) at a recent pool party and told People, "I'm excited to just be feeling good and living healthy, eating better, exercising more and doing whatever I can to get by." Yay, Scott! With a third (!) baby on the way with Kourtney Kardashian, it's a relief to hear he's on the right track. Let's take a look at how he went from world-class jerk to the Lord Disick we know and love today.

Then: Shoved Money In A Waiter's Mouth

Sorry, Scott, but no one is forgetting this incident. He was unbelievably rude when he shoved dollar bills in a waiter's mouth at a family dinner.

Sure, a helicopter pad would've been nice and old Scott probably would've bought one in a heartbeat. But new-and-improved LD? He bought a huge slide for his kids to enjoy. Dad of the year!

Then: Arguing With Khloe & The Whole family

Khloe used to not want to be at any family gathering with Scott. It was a major source of stress in the early seasons of KUWTK.

Now: Kourtney's Family Is His Family

From Bruce to Khloe, they've all come around to being fans of LD. He and Khloe have been especially close lately, as they've helped each other through tough times.

Then: No One Wanted To Celebrate His Birthday

Remember that early episode when Kourtney tried to throw a party for Scott and none of the Kardash krew showed up? Sad times.

Now: All Of The Birthday Wishes

This may be a ridiculous way to wish someone a happy birthday, but in a way, it's Khloe showing how far the two of them have come. And now they're "partners in crime."

Then: He Had Wild Nights Out

Scott Disick has always been a party boy. There were all those episodes where he was out late and Kourtney had no idea what was going on.

This has become his wild night out. Hanging at home with his family, eating cupcakes. This is definitely much more tame.

Then: He Had Anger Issues

There was that time he punched the mirror. Oh, and all the times he yelled at people. He just was not in a good place.

Now: He's Working On Himself

There's no saying whether he can fully cure his anger, but he's making an effort to do better. He and Kourtney went away for a weekend to try and talk through their feelings on a recent KUWTK episode.

Then: Couldn't Be Trusted

Early on in the show, no one took him seriously. The family didn't really think he treated Kourtney well or that they should keep dating. He seemed selfish and shady.

Now: Only Has Eyes For His Girl

Then: Ran Away When Kourt Was Pregnant

Remember when Kourtney first told him she was pregnant and he didn't take it seriously? The pair split because he wasn't being very responsible. The family didn't even want him to show up at her baby shower.

Okay, Scott and Kourtney's relationship still has its ups and downs (and that's their business), but based on what we've seen, he's a great dad to Mason and Penelope. Plus, when Kris Jenner says he's an "incredible daddy," you know he's come a long way.

Then: He Was Obnoxious

Everything about Scott was irritating. From his nonchalant attitude to his rude behavior, honestly no one expected him to stick around this long.

But it's in a funny way. It's like he pokes fun at himself and embraces his own ridiculousness. The show — and the Kardashian family — just wouldn't be the same without him!