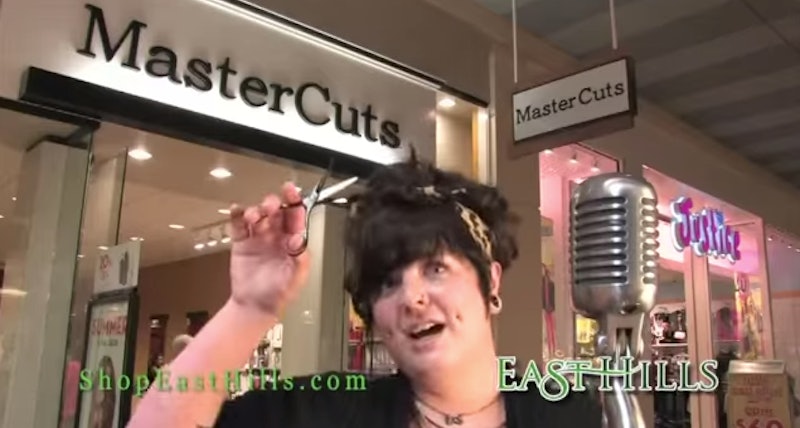 If you're anything like me, after reading this title, your first thought may be, "Wait — malls have commercials?" Well, thanks to a mall with a very enthusiastic group of employees (notice: I did not say talented), we now have the answer to that question in possibly the most horrible advertising endeavor I have ever seen. If you haven't already seen the terrible East Hills Mall commercial, do yourself a favor and watch it. Because, odds are, it's unlike most things you've ever seen. And not in a good way.

Now, assuming that you've already put yourself through the 30 seconds of glory that is the East Hills Mall commercial, I have a few questions that I'm going to go ahead and voice. First of all, was this or was this not filmed on an iPhone? Because I'm leaning toward the former. Second of all, were these people hand-picked? Was there a sort of American Idol, East Hills showdown, where mall employees competed for a coupon for an Auntie Anne's pretzel or something (granted, the pretzel is arguably more valuable than actually winning American Idol these days)? Also, WHAT was so impressive about the haircut lady that she got to appear three times? Her prop was a literal pair of scissors. I can't be the only one who's feeling Sweeney Todd vibes.

A few other things, just because I feel they need to be addressed. First, the vintage mic. Granted, it is clear that the team probably only had around $12 to execute this, but it's amazing that they chose to spend what little money they did have on a vintage mic of all things. I mean, did they listen to what was going on? The mic is not making a difference.

It seems like what happened here is that these people were handed an item, and simply told: "Look, just basically describe what the item is . . . out loud, in a sort of singsongy voice — a tune? Oh, don't worry about that. Not important. Just try not to look too awkward. Or do. That also works. We don't really care."

I mean, they tried. And it sure looks like they're having fun. So I guess there's that. Most likely, it would have been better if they didn't try, but at least we all now know that East Hills Mall definitely does sell shoes and denim . . . and outfits. As most malls do. Everywhere. PLUS . . . haircutttttt (just one).

More like this
How To Reduce The Appearance Of Pores, According To Derms
By Paris Giles
21 AAPI-Owned Beauty Brands That Will Be Your New Favorites
By Audrey Noble
Ed Hardy-Inspired Cross Nail Designs Are Majorly Trending
By Danielle Sinay
Dieux Skin Instant Angel Is The Most Heavenly Summer Moisturizer
By Audrey Noble
Get Even More From Bustle — Sign Up For The Newsletter